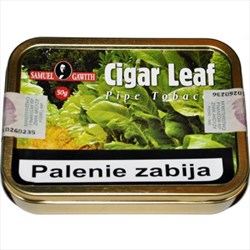 This blend is apparently marketed exclusively in Eastern Europe. My tin came from Czechia. Searching the internets for "Samuel Gawith Cigar Leaf" I see offers in Czech, Polish and Soviet web outlets while the First World remains remarkably silent on the subject with the only exception of a single surprisingly detailed review in Italian. Which is a shame, because customers in other parts of the world (especially Americans who know a thing or two about good Burleys) would appreciate this blend without any doubts.

Like several other Sam Gawith's creations, this blend is somewhat mislabeled. Well, this particular sort of tobacco leaf is indeed used for wrapper in cigar production but a cigar is much more than just its wrapper and, more importantly, cigars have completely different combustion aerodynamics. So don't expect this to be "a cigar in the pipe", it is not. Better they would have labeled this tobacco "Javan Leaf" or "The Call of Dutch Indies" or whatever. Cause this blend is made of fine Burleys grown on the Island of Java and it's the quality of Burley, not percieved likeness to cigars, that makes this blend a valuable acquisition to a tobacco collector.

In no way this weed is made of discarded shreds swept from the floor on an Indonesian cigar factory. This is a Sam Gawith, after all. It's a good tobacco in its own right, regardless of similarity to cigars. What we actually have here is a rare kind of pipe Burley: the Dark Flue Cured one. All the goodness of a good Dark Burley combined with some cigar tones. Yes, it does have cigar tones. No, it's completely different beast than a cigar.

I'd recommend smoking this Javan Dark Flue Cured Leaf in a large filtered pipe: that's the way to tame some excessive roughness by the edges (which is what I distract one star for) while still retaining enough woodsy-nutty-earthy Burley goodness, enough fine cigar tones (which are not overly abundant, I'd say, hence the large bowl) and enough Nicotine (cause this stuff is STRONG). The best drink accompanement to this blend is, in my opinion, coffee - preferably, a coffee from Java (like Jumpit single-plantation for instance). Also, I guess this leaf would shine as a blending component, especially with some bland Virginias, but I haven't tried it myself, I prefer it straight.

Three Stars. Definitely Recommended (if you happen to put your hands on this rare blend).

Smells out of the tin like a really good cigar, but smoked it has rather smooth taste. There is some cigar taste, you can taste some virginia too. Nevertheless it is very strong if it comes to nicotine content.

It's cut very thin and looks dry, even after moisturizing it. Burns rather fast, to white ash.

I see no point in smoking "cigar" in a pipe, but it might be a good tobacco to make your own blends.