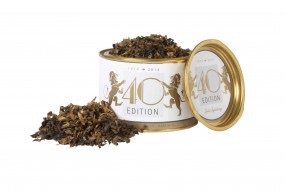 John Aylesbury’s 40th Anniversary Edition blend is unabashedly aromatic, with a light, complex blend of high quality, carefully processed and blended tobaccos to underpin the very natural toppings. An important feature of this blend, something one should know going in, IMO, is, it’s mild. Not insipid, mind you, just mild. I see it was released in 2014, but I would be surprised to learn that my tin is 6 years old, as it tasted "fresh" to me, and there was no "chuff" when I popped the tin. Perhaps they are still producing it? In any case it reminds me a lot of Aylesbury’s 2018 Edition (also reviewed), which made a good impression even though it barely registered in my old mouth. Yet I can tell, based on long experience, and I will say, fair dinkum, it’s “First Quality”. This puts me in the position of recommending something I am not likely to smoke more of, myself, which pretty much sums up my version of a 2 star rating, as I explain (or, I try to…) in my TR profile.

Popping the tin, the fruity topping bursts forth, evoking a fruit monger’s cart. It smells like a stronger version of the topping used on 2018E, with Mirabel plum and peach over green apple, and rose geranium. Although it’s quite natural in character, and likely some will just dig in, I find it’s a bit much at first. The tobaccos run the gamut, from pale golden bits of thin leaves to red-gold ribbons, to red-brown broken flakes, to black chunks, all of it quite drenched with the topping. Though I enjoyed my first smoke straight from the tin, subsequent smokes were better, if only because I left it in its (re-closed) tin for several days before jarring it, to give it a chance to breathe, and I dried it some before smoking it each time after that. As I mentioned, this blend is tops in terms of quality. It handles, loads, lights and smokes down as it should, with plenty of fragrant smoke. The toppings track the tin note very well, except the combusted scents are better for being softer, IMO. The tobaccos are sweet, meadow grassy, dried, fresh hay-ish, subtly dark fruity, and nutty, slightly sour and only faintly bitter, well melded enough so I can’t unwind it. I tend to smoke my first bowl of any aro with caution, even trepidation, just waiting for the awful tastes of PG and/or wretched combusted chemicals. But that never happens with 40E! Rather, it smokes like a sweet dream from top to bottom. I don’t pull, and it never bites. Strength is mild, with negligible nicotine. Tastes build to just over mild. The room note is very pleasant. Aftertaste is a trailing off of the best of the smoke, with the topping fading before the tobaccos do.

Again, key words here are aromatic, top quality, and mild. If it’s so easy to do a mild aro like this, wouldn’t there be more like this than there are? 2 stars from me, meaning I might not smoke the rest of it, but I can easily see that others would like it, and I recommend it to anyone to whom it sounds good.