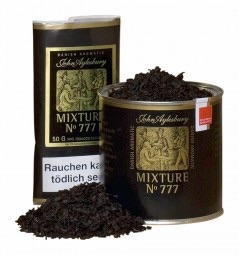 First of all: I don't usually smoke aromatics, but prefer English/Balkan mixtures and VA's/VaPer's/VaBur's without any flavouring.

That being said, I must say that I nevertheless rather enjoyed this one. It's a solid aromatic, not too sweet, not overly exciting, but nice and mellow.

I was handed a sample of it after being somewhat intrigued by the pineapple flavour which struck me as quite unique. That aroma is quite noticeable in the smoke as well, but not overdone, so that one can taste the natural black cavendish notes (as can be seen in the picture this tobacco consists entirely of black cavendish) which I happen to like quite a lot. Also the aroma has nothing or at least very little artificial or chemical, which I find to be unusual in that tobacco departement.

Lights and burns easily, tongue bite only a little and only if you're a hard puffer. Moisture out of the pouche was spot on, but seems to have a tendency to dry out quickly, so store accordingly. Aroma stays until the end of the bowl, thumbs up for that!

Minus for me: it has only little nicotine, but that will suit others well.

Since it is such a light-weight I will maybe do some experiments and blend it with other tobaccos. Kentucky comes to mind, maybe Perique, could be interesting.