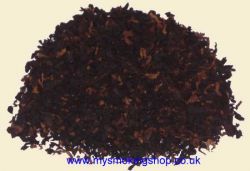 A blend of four unusual black fire-cured grades enhanced with sweet Virginia and a top dressing of cordial.

The cherry topping is creamy, deep and rich. The vanilla is a mild supporting player. There's a light grass note from the Virginia, but no real tobacco taste beyond that. Has very little nicotine. Burns at a moderate pace with a consistent flavor, and won't bite. Leaves a little moisture in the bowl, but no dottle. Needs a few relights. Has a pleasant after taste and room note. It's also Lane's Black Cordial.

The Oxford English Dictionary defines cordial as: "Warm and friendly".

Century Black Cordial is black. It is not cordial.

I would say it is "Causing or involving great suffering, fear, or unhappiness; extremely bad or serious".

My bag will go to the homeless and destitute.

Century-Black Cordial. This is quite a pleasing mild smoke. Not extraordinary but still a good enough smoke.

The pouch note brings the smell of Ribena cordial to mind. A touch berry like and quite sweet.

On the negative side it's in need of drying. Not just a short airing but a decent one as it's almost tacky to the touch.

From the smoke the cordial flavour comes across quite strong. Again, like Ribena, it appears to be some form of berry cordial that's been used. There isn't much natural tobacco tastes to be obtained. The Virginia seems just about non-existent and the Black Cavendish's sweetness isn't too discernable because of the sweetness from the cordial.

Another negative, tongue bite. Sip slowly otherwise your tongue may melt! As long as I use a gentle technique it's enjoyable enough but if I allow myself to slightly over puff then it gives me some agro'.

There isn't a great deal of N in this, it requires a deep inhalation to really notice any.

Once it's lit it holds the burn well. A few tamps here and there seem to keep it in line.

As I said at the start, this is quite a pleasing mild smoke. Nothing extraordinary but good enough. I wouldn't add it to my regular rotation but it's alright as a one off.