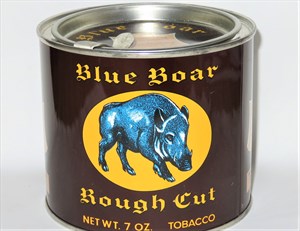 A Mixture Of Fine Tobaccos. So Cut As To Make A Perfect Smoke For The Pipe.

The main star was the various burleys, which offered some nuts and wood, a bit of earth, a very light molasses, and a pinch or two of spice. The floral, dry, woody, eartthy Orientals were almost a supporting player. The smoky, woody, dry wine-like Syrian latakia was a condiment, though it was a little more obvious than the Virginia. The grassy, citrusy Virginia was the base for the other components, and as such, ended up being the least noticeable varietal. The nic-hit was in the center of mild to medium. It didn’t bite, but it had some harshness and rough spots, mostly from the burleys; white burley in particular. Burned clean at a reasonable pace with a little inconsistency in flavor. Left little moisture in the bowl, and required an average number of relights. Had a rough after taste, and was not quite an all day smoke.

I wanted to know two things about Blue Boar: 1. How does it taste? 2. How close did Bob Runowski get in recreating this taste with Morley’s Best?

Once I obtained a smokable sample, the first part was easy. The second part was more perplexing because of the age of this tobacco.

I’m guessing this was packaged between the 1940s and the 1960s. I’ll just say its 50 years old give or take a few years. Either way, that many years would make this Blue Boar different now than when it was originally packaged. I think most tobaccos with that much age would change, some significantly, in how they smell, smoke, and taste.

I alternated smoking these two blends back to back a few times in different pipes. I thought this best rather than letting a day or two pass between smoking one and then the other. Blue Boar is milder and has an obvious flavour not detected in Morley’s Best. That being the aged bright Virginia. I have some Mac Baren Virginia No. 1 that is 35-40 years old and it taste notably different than the current version of Virginia No.1 (even some with three to four years age). Just like Virginia No.1, the bright Virginia in Blue Boar has darkened and has a similar unlit smell and a similar smoking flavour. After the first third of the bowl, the old Virginia fades and the flavours of the three tobaccos meld more. Unlike MB were the Latakia and burley dominate throughout the smoke and the Virginia tags along as a sweet after thought (much like its tin note).

From my limited smokes of Blue Boar, I think Bob Runowski got as close to recreating its flavour, with Morley’s Best, as anyone could. I think Bob accurately blended the types of tobaccos and their proportions to match Blue Boar. I believe if we could transport this pouch of Blue Boar from the day it was packed to today, the only noticeable difference between these two blends would be in the crops available then verses those now.

This is another blend that I went back to my files to pull out a review. And by files, I mean the paper files I kept in the 1970s, long before computers came along. The co-founder of my local pipe club swore that this was the finest tobacco he ever smoked. I just remember buying a few pouches because I loved the art work. They sat in an old cooler for 20 or so years before I was convinced to give the ugly old boar a shot and I'm glad that I did. Talk about an old style Burley with some added goodies, this one is it. The burley was just a tad on the bitey side but the Orientals were cool and spicy and the Virginia was solid and very broad cut. A nostalgic ride for sure.

How good was it? Well, I'm saving the other pouches for the tin art, and not to smoke.