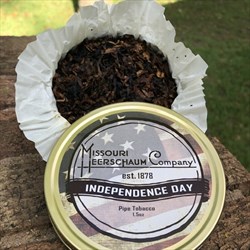 ​What's more appropriate than an iconic American company celebrating Independence Day? Missouri Meerschaum proudly releases their first limited edition blend for Independence Day 2015. This pleasant blend of bright, zesty Virginias, smooth black cavendish and cool smoking burleys is enhanced with notes of fruit, nuts, vanilla and a touch of amaretto. This blend will be perfect to enjoy on the Fourth of July in the sunshine in your favorite corn cob pipe, as the flavor has been optimized for use in a Missouri Meerschaum cob.

Notes: Independence Day 2015 has been limited to 1,776 tins, so get yours while they're still available.

I bought the tin of MM Independence Day 2015 last year after the 4th of July & decided to hang onto it until this year. I had tried a couple blends last year with fruit/citrus in the description & wasn't enthused with them. That was not the case with MM ID however. I was pleasantly surprised with how much I liked it, that I ordered another tin.

The tin note reminds me of vanilla amaretto cookies I remember from my childhood. It's a very smooth creamy scent that actually translated into the smoke for me. I could taste a light almond mixed with subtle apricot flavor rounded out by a creaminess of the vanilla. It's not an overly sweet tobacco by any means, more on the mellow smooth side.

In the tin the tobacco is at a good moisture level, it could probably bite if you puff too fast. It burns well in the pipe with only a couple relights & the flavor stayed consistent throughout the smoke. I had a bit of dottle left in the end & a bit of moisture at the bottom of the pipe. It wasn't a lot, but enough to note.

I tend to shy away from short run tobaccos, but I'm glad I didn't miss this one. I believe it could have sold out from word of mouth alone, like P&C anticipated it to last year, if more people tried it. All in all, I think this is a well balanced flavorful aromatic tobacco blend that was unnecessarily overlooked!

Age When Smoked: 1 year in the tin

Well, this one surprised me. Very pleasant smoke. From the description, I expected something too fruity for my tastes. The aroma and flavor is a bit reminiscent of the county fair. I swear I smelled cotton candy somewhere in the background!

A solid burley/Virginia/Cavendish blend with well-balanced toppings. A great smoke for any time of the day.

I found the tin note rather unusual: amaretto biscotti, cocoa, walnuts (or some other nut), and maybe vanilla. It comes wet-looking, apparently by design, but quickly found that it was just at the right level of consistency ideal for this blend, as it filled the little cob chamber snugly, with no problems

I fired it up and was very pleasantly surprised. It took the char right away and no relights needed. It smoked smoothly and slowly throughout and seems particularly well-suited to a corncob, which after all could be the raison d'etre for this line. The flavors that come across remind me a bit of the best aromatics such as those blended by Dan Tobacco. The amaretto, so pungent and clear in the tin note shows up in the smoking more like a darker, richer liqueur but one that allows the other flavors and particularly the good leaf quality to shine through fully.

Since this was issued as a limited quantity production, I'm surprised that it wasn't sold out by the time it came to my attention. Perhaps not enough people have smoked it for recommendations to spread. Based on the few recommendations that I did receive, however, I secured two tins of it. I've never smoked anything quite like it, though, and I'm glad I got to smoke this relative rarity. At least I'll get to know it well before it disappears.

Age When Smoked: One year.

This is a pretty good light Aromatic English. It's pretty mild with a slight vanilla flavor, I don't pick up any amaretto or really anything else that other reviewers picked up on. Maybe they've changed the recipe or something. The nicotine is pretty mild, could be an all day smoke. I'm going to cellar some to see how it develops.

This is the perfect blend for Summer. It is light, but flavorful and still has enough complexity to keep you interested. The aroma out of the tin gives off more sweetness than the actual smoke delivers. The moisture level is perfect and ready to load. Upon first light, the taste is grassy and sweet. As you smoke, the Latakia comes through in whispers. I do not really notice the Burley or the Cavendish. The top notes of vanilla and amaretto only provide balance. No worries about candy here. As the smoke progresses, you do find some depth and the sweetness moves to the background. My wife says the aroma is too much like a cigarette to be enjoyed, but it is tolerated for a time. The ash is fine and gray. No after-taste. A perfect representation of our Independence: a little bit of everything from around the world with the emphasis being mainly American.

Yeah, I don't get it. I am realizing more and more that I just don't understand aromatics. This one is over the top. With so many flavors added to the blend (amaretto, nut, vanilla, and citrus), it just blinds the palate to the natural of the tobacco. That being said it burned well, it was perfect moisture out of the tin. This blend just had nothing of interest to me.

UPDATE: This review was 14 months in the making. I bought 2 tins in June of 2015 and opened the first one on July 4th 2015. I didn’t so much get the aromatics in the tin note as the Virginias at first and attributed the sweetness to the blending of black Cavendish and burley with the Virginia. The more I smoked it though the more I began to identify a light Amaretto and citrus note. It was a decent smoke, fairly smooth with only an occasional bite.

I have been slowly smoking this blend but usually only a bowl or two each month when the mood hit me. It’s been probably two or three months since I last opened the tin. When I opened it today, I was frankly expecting it to have become crispy. It wasn’t. It wasn’t moist either but it hadn’t dried out as bad as I was expecting. I also noticed a nice almond cookie scent as opposed to Amaretto. I know some may say there isn’t a difference between the two, but the almond cookie has a more pronounce vanilla scent. It kind of reminded me of fresh baked almond cookies sat in an open window next to a fresh mowed field. That’s my opinion and I’m sticking to it. Yours may vary.

It lit easy and smoked to the bottom of the Cobbit Shire I was using with no fuss, no tamping and no relighting. It’s was a sweet, creamy smoke with a creamy Amaretto flavor on my palate. The flavor profile was only enhanced by the black coffee I was smoking and I did occasionally ask myself if I was tasting cocoa. That being said, it’s not a punch you in the face aromatic after sitting for a year.

I have decided that I am glad I bought 2 tins and that I still have one unopened sitting in the bottom of my cellar. I will probably buy another tin or two if they are still available when I make my next tobacco purchase.

I was looking for something different to smoke over the 4th of July weekend and remembered I had a tin of Independence Day 2015 sitting in the bottom of my tobacco locker. That was two years well spent.

When I opened, the tin I was immediately greeted with the aroma of a milk chocolate cocoa mix. Sort of reminded me of Nestlé Cocoa that used to come in the tins instead of the little pouches they do now. Rich, sweet and with just a hint of coffee to my nose. Interestingly, I let it sit open for about 30 seconds and the cocoa aroma became more muted. To me it had a more nutty, buttery aroma that is still delicious smelling.

The moisture content was still good and it didn’t need any drying out before I loaded it into a MM Cobbit Shire. I followed that with a bowl smoked in a MM Legend. The original claims are that it was perfectly formulated for Missouri Meerschaum cobs and I would say that is accurate. I would also say, “Don’t hesitate to smoke this in a briar or meerschaum.” It smokes good in the ones I’ve smoked.

I’m find myself now wishing that it was still on the market.

Age When Smoked: 2 years at this point

Tin note was refreshing with a prominent nice whiskey like aroma for me along with another lightly scented sweet aroma. Very summery note - The smoke was light and smooth with varying nuances as it worked its way down the bowl. The amaretto is a key player with a very light yet tasty note - very refreshing as well and is offset by a nice citrus note. After the first 3rd, the nuttiness of the burley adds additional interest. The blend's key is its nuance of flavors - It's not an in your face aromatic it is very well balanced. A savory smoke to sip and enjoy slowly. Probably not one to smoke like a locomotive. Smoked best in my cob as recommended.

This is a go to for me in my country gentleman MM pipe. It smokes easy, and tastes faintly of marshmallows. It's not a heavy aromatic so I could really appreciate the tabacco. Pleasant on a mild afternoon, and no complaints from those around me.