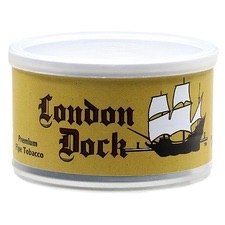 Daughter & Ryan's London Dock is a blend of double-toasted Burley, Virginia, Oriental, and Perique, topped with rum and coumarin, making for toasty, earthy, slightly sweet smoke with just a hint of spice and fig.

Notes: Mark Ryan wrote: London Dock contains double toasted burley, Virginia, Oriental and perique tobacco. It's topped with rum and coumarin flavors. The original formula had deer tongue, which is replaced by coumarin, something several manufacturers do. However, the Original London Dock used rose essence which is not used any longer by blenders due to its unpopularity.

The double toasted burley is the basic star; toasty, a little sweet, grassy, earthy and nutty. The Virginia provides citrus, grass and hay in a support role. The Oriental offers a sour note and wood in a minor way. The perique is slightly noticeable with spice, and a touch of raisins and figs. The coumarin is very slightly vanilla-like, and adds a nice floral context with some strength. The rum is richly sweet. The deep toppings do sublimate the tobaccos to a fair extent. Well balanced with a nice complexity, it has a very consistent flavor from the first puff to the last one, but needs to be smoked at a slow to moderate pace to catch them all. Burns cool at a moderate pace without bite, and has no dull or harsh spots (unless you puff fast), and leaves no moisture in the bowl. Barely needs a relight. Has a pleasant after taste. Three and a half stars.

Finally, THIS Blend by D&R LONDON DOCK is about a close as you can get. It brings me back to a rainy day in the early eighties on a Sunday when I picked up my first pouch from Woolworth. Since my tobacconist De La Conhca on 57th Street was closed on Sunday. I really liked the smokey rum based and floral over tones This is a Wonderful blend. I wish they sold it in one pound bags

I was given a small sample of this at the last Chicago pipe show which equated roughly three bowls worth. I requested the sample because I was intrigued by the tin note from the open container.

To my senses this tin note did not translate well to the smoking experience. The topping was weird, kind of perfumey to me. I know this may get me skewered by some of the fans of this blend, but there was something kind of Mixture 79 to this, but much different in the underlying base leaf composition. The topping was better than that of M79, but not by much.

In performance it also acted similarly to M79. the topping, pervasive at first, mellowed at about the half way point allowing the underlying leaf to come through. This is where I actually preferred M79 which gave me a nice nutty, sweet burley. London Dock had a sour tang likely coming from the oriental which took the predominant burley taste in an odd direction to my palate. The perique was also adding a little spice that also felt out of place.

If I can give credit to one thing, it is that this blend is unique. I have never tried the original London Dock, but if it is anything like this blend, then I probably would not have been a fan. It may be clear at this point that I did not like this blend and won't repurchase it. But as the other reviewers did enjoy it and due to its unique nature I will leave this one at 2 stars with no interest in revisiting.

This is my opinion based on the 10 bowls of London Dock I've smoked so far.

The pipe shop where the New Orleans Pipe Club holds its monthly meeting provided us with a fresh tin of D&R London Dock to sample. Four of us stood around smoking it and talking about it.

The first smoke I found it to have a consistent cherry flavor throughout the bowl and I kept getting hints of vanilla. The spiciness of the perique keeps peeking through also.

I don’t get the rum.

Three other New Orleans Pipe Club members to varying degrees found the cherry flavor to drop off mid-way through the bowl and it briefly tasted a little ashy but then the vanilla and the cherry came back. In my opinion, this is because the blend is burley forward. I personally didn’t get the ashy taste until the very end of the bowl when I pretty much was smoking just ash.

I find that it burns good. So far, every time I’ve smoked it, it smoked down to a fine ash with just very small particles of tobacco. I have smoked it in a Missouri Meerschaum Diplomat, two different Meerschaums and a variety of briars.

It has not bitten me yet.

The tin note does have a cherry hard candy aroma bordering on cherry cough drop, but I don't get any weird or chemical after taste. I don't know about room note because I generally don't smoke indoors. But, while smoking it outside yesterday, the wife said it smelled nice and she picked up the sweetness and the cherry smell when the smoke drifted in her direction.

Is it the best cherry tobacco on the market? Maybe not but I won't hesitate to buy more of it. I also can't compare it to the original London Dock because I have never smoked it.

While I can agree with JimInk's review in terms of the flavor of this blend, it smokes too fast, hot, and wet for me to really enjoy it. I do puff on the fast side, so that no doubt needs to be taken into account. Even a pinch overwhelms any neutral blend you might add it to. If you're a slow puffer and the flavor profile attracts you, give it try, but it's not for me.

Age When Smoked: 5 months when opened, then over 8 months

Now to D&R's iteration--it ain't bad, but neither is it really London Dock. This is something else. It is a bit too much from a newly-opened tin. All the casings aasault the nose, to the exclusion of the constituent tobaccos. But persevere, and the burley, Orientals and Perique will break through, affording a complex, though mild, smoke. The key to enjoying this blend is to leave the tin unattended, but closed, for a few weeks. The tobacco stays moist, but the objectionable initial tin aroma disapates.

After the period of neglect, this becomes a very interesting and flavorable smoke, especially for Perique and Oriental fans. This has a sharp spiciness, such as I have never experienced.

But be forewarned! This blend contains a cherry flavoring THAT NEVER GOES AWAY in the pipe. It leaves a truly nasty ghost, like the cheap perfume of a one-night indiscretion you'd rather forget. So, smoke it in a "sweatshirt" (a cob) and not a cashmere sweater, until you think you might want this gal to stick around!

Similar Blends: Nothing I can think of. This is it's own "bad pony." Apologies to David Mamet for stealing that meme..

This is a rather dryer tobacco base characteristic of D&R with some aroma enhancement that doesn't translate much to the taste. The most oustanding elements are the aromas of cherry and from what I understand coumarin substitute. The coumarin note is a deep, dark vanilla and toffee like character that is very appealing; I wish the real stuff could be used which has an accompanying pronounced sweatness unlike the substitute being used. The cherry addition is rather baffling to me. I'm unaware that the older and/or traditional versions of this blend had cherry in it. I had smoke the Middlton version back in the day and it definately didn't have cherry in it so, I don't understand this blending choice by D&R. The cherry also adds an unpleasant almost phenolic undertone which I don't like.The rum went unnoticed. In my opinion aromatics fail if there isn't enough underlying sweetness to compliment the aroma as is the case here with flat taste. And I understand this is so common today due to current additive restrictions to tobacco. To take license and try to reinvent an aromatic this way is a disaster.

This was one of those unfortunate blends which incurred an import charge from customs. Hindsight, that wonderful thing, says I shouldn't have bothered!

The tin-note sets the precedent for the forthcoming smoke: strongly flavoured, and acrid. The blend is a mixture of light and medium browns, is a medium size ribbon, and has good hydration.

The moment I lit a bowl I felt disesteemed. That feeling hasn't changed. The different toppings create a herby, sharp, bitter, perfume-like, unpleasant flavour. The coumarin claims responsibility for trashing most of the fun! But, lol, the rum and cherry give a support of insurrection! The toppings leave little room for the tobaccos, the Burley can be identified, but the rest miss me. A bowl burns fast, and also too warm.

London Dock? I smoked a few bowls then threw it in the bin. Not recommended:

I find the categorization of this blend as "American" rather than as aromatic interesting in light of the aromatic designation that Rowland receives. I would imagine that any pipe smoker would enjoy this blend. Interesting from tin pop to the last puff, smooth, tasty, and reasonably satisfying in the nicotine department. I think this blend would be great to share with a newbie. It's got a lot happening to keep you interested and burns easily and w/o excessive heat or moisture. Makes for a nice contrast bowl and would serve as an introduction aromatic blend for hardcore non aro smokers. (heheh)

𝗟𝗼𝗻𝗱𝗼𝗻 𝗗𝗼𝗰𝗸 I want to preference this review by stating that I haven’t smoked aromatic tobacco in years because of the after-taste and moisture left at the bottom of my pipe bowls. This is aromatic tobacco and is one of two that I really like. It has a very pleasant fragrance inside the can and inside the pipe before you light the pipe. The flavor is tasted as you smoke the tobacco and the taste does not change or get stronger as you smoke London Dock. Bitterness and bite are non-existent in this sweet and relaxing blend. To my surprise, this aromatic tobacco burns cleanly to gray ash instead of a wet bowl. Athey, another aromatic blend from D & R Tobacco, also smokes to clean gray ash and it has a completely different fragrance. Neither blend is hot smoking and that is the main reason I quit smoking aromatic blends. This particular blend leaves me feeling very calm after smoking a bowl of it. I highly recommend this blend for those who want a relaxing, enjoyable, and cool smoking tobacco. The clean after-taste stays in my mouth.

Every time i sniff the tin i get something different, from cherry to coconut to bubble gum! It is complex indeed and heavily topped but the leaf is of high quality, it took me few bowls to understand it and like it. Room note is not bad but not the best either. It burns cool and fine. May be highly priced and that will knock it down a point but other than that i bought few more tins to cellar for when my sweet tooth demands to be attended. Al janabi

Similar Blends: Some what different approach to cherry/berry aromatics nothing i can really think of that comes close, may be mac baren cherry ambrosia?.