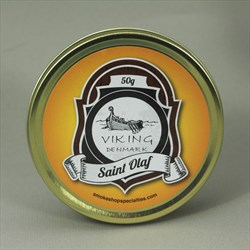 St. Olaf is a robust blend of smoky Latakia, supported by fragrant Orientals and sweetened by select Virginias. A bit of spicy Louisiana perique is added or more body.

Notes: Not connected to the Bjarne line of pipe tobaccos.

While I don't feel as negative as the previous reviewer about this blend, I definitely feel that it does not live up to four stars. Both in appearance and tin aroma, it is very similar to Sutliff's Bosphorus Cruise; the last medium English that I had opened prior to this. Both blends have a very "smokey" tin aroma which seems to overpower the other tobaccos, making for a very monochromatic nose. Both blends light and smoke in an acceptable manner and both satisfy in an acceptable way. The problem is that a lot of medium English blends do the very same thing when smoked; smoked, I might add, from a very crowded field. The medium English field is so overcrowded that one immediately does two things when lighting a new blend: first be prepared to go ho-hum, then start looking for something that would allow the blend to stand out. I didn't find it in either the Viking blend nor in the Sutliff blend, although I can say that I prefer Boshorus Cruise to Saint Olaf. The reason for this is the ability to smell, taste and feel the background tobaccos in the mix with BC; something which is important in a medium English. Be that as it may, I'm still willing to recommend good old St. Olaf and give him three stars.

This is tobbaco light. Bought a tin last week at JR's. Smoked it during the course of the week. Has little kick. Is what I would call an American English blend. Someone tried here they just missed the mark. Lights well and smokes slow. Took several relight and more tamp than I am used to. This is a tobbaco that you seem to have to play with. Under five I might buy again. Over five it is not worth the smoke. Shame.. I was so looking forward to a good smoke here but the blending never came out to greet me. It was just a very average smoke in a field full of better blends. Nice to try but I will look elsewhere for something to add in my rotation.

Got this as part of a sampler a few months ago. Having several other blends to work on at the time, I gave this a quick try and then put the remainder of the tin in a jar and nearly forgot about it. While reorganizing my shelves, I came across Olaf and decided to finally give it some attention.

Summarily, nothing is going to rock your world with this blend, especially if you're heavily experienced in all things English, Balkan, or otherwise orientals based. That's an almost overwhelmingly crowded genre of pipe weed, and even the most renowned, coveted blends only subtly differ from their literally hundreds of kindred blends, normally in the quality of leaf used. I won't go so far as to say "if you've had one, you've had em all", but you get the gist.

Normal leather and spice aroma in the tin. There's a medium-heavy to heavy presence of latakia, easily seen in the color proportions. Moisture content is just about perfect, which shouldn't have changed much in the couple of months it spent in a sealed jar. It packs easily and lights quite evenly after one false light. The flavor is fairly rich, dominated by the latakia of course. But you get a few hints of incense like spice from time to time. The virginia is mostly covered up, which isn't uncommon, but I do detect a moderate amount of perique, the robust sweetness working in harmony with the smoky latakia.

I'd put this down as a decent medium English. It's nothing spectacular, as I said, but it's fairly priced and smokes smoothly and evenly, especially in a cob. I'd probably consider buying again, except I'm not particularly an English or balkan kind of guy and already keep a few more special specimens in rotation to round things out. It's no Balkan Sobranie, but I recommend trying at least once.

The Latakia percentage in the blend is not so low, still, the overall smoke doesn't give you a nose-itching feel of English blends at all. It doesn't bite, doesn't give an overwhelming taste, yet satisfactory (I am very much into Latakia blends). Through the middle of the bowl, a pleasant taste appears, to me, it's very much like a sweet virginia tobacco burning, disappears if smoked fast. These observations are based on what I consumed, which is 2 tins of 50gr.

Age When Smoked: Straight from the tin

This is my first sampling of the Viking Label. Pleasant smoke with a light Latakia application. None of the tobaccos take over the blend and dominate the flavor profile. Semi-sweet and sour flavor with a hint of camp fire smoke. I feel the Perique is either applied lightly or has not shown at all. This is a good entry level smoke for those wanting to try an English blend. Mild enough to smoke all day if you like your weed on the light side. Not a power hitter on the Nicotine side either. Will smoke remainder of the tin but will most likely not make it a regular here at the ole Dix Creek Farm.

tasty, nice balance ang good flavor on the palet...like the med weight and the room fills with a pleasant nose...i find this blend very attractive...the price is reasonable for such a nice English blend