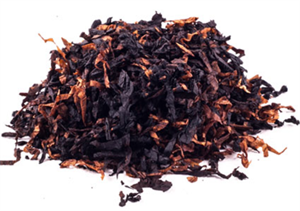 A blend of Black Cavendish, Carolina and Dark Virginia's with a hint of Perique.

Frederick Tranter-Brindle Mixture. This makes a large quantity of smoke!

This, to be fair, doesn't have the usual sharpness I associate with blends containing Perique. It's a major player but adds more depth to the taste rather than the often found simple spiciness. I get an almost plum like taste brought forward by the Perique but little sharpness from it.

The Black Cavendish causes the smoke to have a silky quality. It's not as dominant in the flavour but rounds the mix of nicely.

The Virginia? Well, this doesn't give too much specific flavour to the blend but it seems to be the backbone of the smokes make-up. There isn't anywhere near enough nicotine for this to be comprised of a higher proportion of Perique in comparison and I think that because the Perique's flavour is quite formidable it will cover any idiosyncrasies from the Virginia.

As I said, there isn't too much N in Bridle. It's medium but I wouldn't class it as being much more.

The burn is relatively hassle free and even giving me a bite free smoke. It seems to be of a good temperature too and only becomes too warm if stressed too much.

I find the room note alright. It only gets an 'alright' as although the aroma's good enough it creates a little too much actual smoke in the room!

This is a good enough blend, it's a touch different to the usual Perique blends so I will happily recommend it.