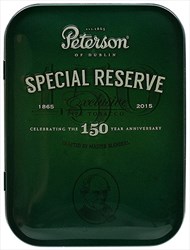 Peterson's Special Reserve 2015 is this year's expertly blended edition in the long line of yearly reserve tobaccos from Peterson. To mark their 150 year anniversary they have released this luxury blend that offers ripe, loose cut Virginias, burley and mellow sweet cavendish. The flavours of these superior tobaccos come through naturally and are enhanced by the light addition of casing and topping, which is elegantly sweet and fruity. The pleasant room note expounds quality tobacco that is sweet and light.

The Peterson Special Reserve 2015 is loose cut and alluring to the eye. Chunky golden brown ribbon laid upon russet brown, amidst bister, taupe and black. Upon opening the tin the aromas of sweet summer fruit wine tempts the nose. This is an indulgent mixture to prepare for smoking. As the flame dances its surface it catches and burns, seemingly with glee. It's a long, relaxing, cool smoke that would aid in contemplative meditation. Being a Special Reserve for 2015, this tobacco won't be around for long.

Notes: This blend celebrates the 150 year anniversary of Peterson of Dublin.

I think there is one word that could sum up this magnificent blend... luxurious! The smell from the unlit mixture is a great representation of the treat that's about to begin, slightly alcoholic, fruity, with a citrus twang. The blend includes a higher proportion of Black Cavendish to Burley and Virginia, probably about 60% Black Cav'.

Once lit the smoke is smooth and creamy with a subtle decadent aromatic side. The fruit and wine are more of a gentle embellishment to the flavour, it isn't the usual gloopy affair. As well as the fruit/wine I get a good citrus 'zing' coming through too. The smokes temperature is cool and it doesn't bite. The nicotine is quite mild in this, it appears to be a blend for taste rather than N. Special Reserve can burn a little too quickly when it's pulled too hard, but I suppose that's a paradox of me trying to get more N by really chugging my pipe! I find the room note a good one as it has a fruity edge but it isn't too full.

As I said at the beginning this really is a luxurious smoke and I just have to give it full marks! Four stars.

The shop sold it as a natural tobacco, no flavoring, with Virginia dominating the mixture, however it was a pleasant surprise, that it has a decent amount of Burly and Cavendish aswell. It has a sweet scent as if it was an aromatic mixture, however upon smoking it, it is not the saucy, overwhelming thank goodness it lacks the syrupy hit of an aromatic mixture, it gives a cool, enjoyable, mild smoke, almost like a pure Virginia, it starts out fruity in flavor, but later it ages to dark chocolate, honey and a hint of walnut with caramel at the end. I would recommend consuming a sweeter dark beer with it, or Earl Grey Black tea without any sugar. Both bring out different qualities of this tobacco and harmonize well with its properties. A nice Chianti wine brings out its fruity notes, Johnnie Walker Double Black makes it a real dessert, however not everyone loves to drink while smoking. The nicotine hit is minimal, making it enjoyable for members of the prettier sex and starting pipe enthusiasts. Like with all pipe tobacco you need to give it time, be patient and it will reveal all its qualities. By all means it is a luxury tobacco, quite perfect at a fair price. I would recommend it to all my friends.

This is one of the most enjoyable aromatic blends I have ever smoked. It is warm, mellow, and sweet but not cloying. It even has a slight citrus zip to it amidst the overall Caramel sugar flavor. Truly worth smoking and, as it is only available (sadly) for a limited time, worth stocking up some extra tins. By the way, the 3.5 oz tin is an example of very nice packaging as well.

I was given this tobacco by a friend who mostly likes VA's. I was very fond of it in the beginning, but fondness slowly turned into aversion as weeks passed by. The initial elegance somehow broke down into what seemed a very cheap ARO. Lovers of fruity ARO's will likely appreciate it, just avoid letting it age.

Age When Smoked: 6 months from opening.

Peterson did this one right for their 150 year anniversary. It starts with a beautiful, dark green tin and winds up in bliss. Though the tin and the bag inside it are unsealed, the tobacco is moist. Rough cut, it smells like sangria-laced, golden fruitcake, with the bits ranging in color from gold, to mid-browns, to black, reflecting a range of VAs and Burleys, including Cavendish. I like to pluck a wad straight from the tin and stuff it into a big pipe with an easy draw. This tobacco handles, lights and burns well enough to warrant its “luxury” designation, and the soft and generous way the topping integrates with and enhances the tobaccos does nothing to take away from it. When smoked, the tobacco blend itself is VA forward, but just, and the Burleys are soft and rich like cashews, with just enough tannin to keep my palate clear. Tastes sharpen up a little down the bowl, even though I take it slow, thus avoiding any trouble from burnt toppings. Still, there are some mild spices, along with woody and floral side streams that are highlighted against the Cavendish, and I would not be surprised to learn that there is a smidgen of DFK in the mix. When smoked, the topping becomes lighter and more “sophisticated” and nuanced, IMO, a real compliment to the tobacco. Strength is mild; tastes build to just past medium; room note is truly pleasant; aftertaste is a lingering, trailing-off best-of-the-smoke.

IMO, Peterson’s Special Reserve, Limited Edition, 2015 is a mouthful in more ways than one. Though I often say, “I don’t smoke aros”, here is proof that I will smoke anything that pleases me, thank you very much, and this is simply a very pleasing blend. It’s a pity it is truly limited, and those who wish to try it had better jump on it now as it appears to be flying out of the shops at a brisk rate.

Age When Smoked: right out of the tin

Similar Blends: It sounds crazy to say it but, with respect to the tobacco alone, SR2015 rather reminds me of Old Gowrie; less spicy, but that's what came to mind. Add the topping, and this blend is +/- unique, at least to my knowledge..

When I first began my first pipe of this tobacco, I was a bit unsure whether I liked it. But the more I smoked, the more pleasurable each puff became. The flavours come as you smoke, slightly citrus, with a definite hint of walnut. It gives you a smooth smoke, which burns slow. This tobacco is quite mild, but also flavoursome. Recommended

The tobacco is packaged in a 100-gram jar box. Of course it's not airtight, so I had to put it in a jar to moisten it and wait a few days. While pouring over the tobacco, I was once again surprised by its cut. The tobacco is chopped up randomly, but it's funny that in addition to the rough cut there are also short and broken pieces of Virginia flake - as if someone grabbed the remains of a good flake package and dumped them here.

The color ranges from light brown (Virginia) to medium brown burley - to black (Cavendish). The different varieties are easily distinguishable. The tobacco clearly has several varieties of Virginia and a lot of Cavendish.

The flavor is creamy, citrusy, honeyy, nutty. The aroma is bright, even though the tobacco was not hermetically sealed and has been sitting for about six years. After humidification, the herbal note of Virginia showed up as well.

This kind of tobacco is easy to pipe and just as easy to light. At the beginning of the pipe the taste was a little harsh. The flavor details are a herbal Virginia note, bitterness and astringency of walnuts, a little creaminess and sweet honey sauce. The flavor is uncomplicated, you don't have to try to find something here that's in the description, but you can't catch it in any way. By the end of the third of the pipe flavor and aroma become weaker, harshness disappears, sweetness goes away a little, and the tobacco becomes the usual light sweetish blend, where burley plays the leading note, but Virginia and Cavendish have a decent place. Despite the lightness, this tobacco is a little drying in my throat, so I smoked it interspersed with sips of water for tasting. But it also goes great with a glass of wine or a shot of port. Nicotine hit is not a threat at all - the tobacco is light, and becomes more pleasant and more natural tasting as you smoke.

The burning temperature is quite high, the tobacco does not dispose to quick smoking, and in small pipes tobacco should be smoked very carefully. The ash is even gray in color, there is not much of it. There is no moisture at all.

The smoke has a honey-sweet flavor and disperses very easily.

What's the bottom line? Fans of flavored tobaccos were probably not disappointed with this blend. It's a shame it's no longer being released. At any rate, I liked it a lot, despite a fair amount of burley. This blend is among my favorite desserts from Peterson, along with the 2011 Holiday Season and Special Reserve, as well as the 2015 Saint Patrick's Day and its twin brother Founder's Choice

This particular tin was gifted to me by a dear friend and for that I'm grateful.

I've been buying the Peterson brand for a few decades- pipes and tobacco and I've always been very pleased until this tin. Every special blend they make I get at least one and they all come with a "special" price . I think my problem with this blend is that it was heavy on the Virginia side and it just reaked of cigarettes, we smoked it outside for that very reason and it still was not getting any praises from us.

I received a tin of this blend as a gift from a fellow pipe smoker. I wouldn't usually go for a tobacco I cannot get regularly in case I really enjoy it. In the case of this blend I have to say I'm glad I didn't buy it myself.

The tin looks beautiful and the tin aroma is quite inviting. Figs, raisins, dried plums and some citrus with some liquor in the background. These are the only good things I can say about this very disappointing offering by Peterson.

Although I mostly smoke VaPers, I regularly indulge in some aros for a change of pace, including a couple of Peterson's blends. Connoisseurs Choice and Hyde Park. The 2015 Special Reserve blend cannot compare to any of those two in any way. I can only describe the blend as bland and unsatisfying. It lacks in flavor, body and nicotine. Just to make sure I was being fair to this tobacco I just smoked two bowls back to back in my Lubinski meer bulldog. I was not wrong and my original impression was spot on: bland, almost tasteless and extremely mild.

I'm giving my tin away as I don't like to trash tobacco. Very dissapointing. Not recommended.