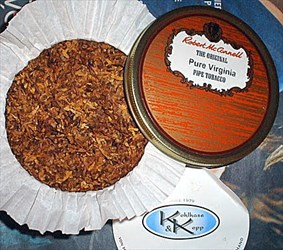 The opening of a fresh tin reveals a fine to mid-size ribbon, that's medium brown, and of a great hydration. I don't recognize much in the way of an aroma, it smells like a standard Virginia.

The hydration makes for easy ignition, and it gives an okay smoke; I'm sure many folks will love it, but for me it's a bit too boring to be smoked straight. To me, the smoke's a mid-ground Virginia one. What I mean is it doesn't have much citrus sharpness or causticity. The most abundant flavour's quite a calm hay-like one. The burn's good from P.V., but it can become a touch warm. Like in the aroma from the tin, I don't recognize anything that's 'out of the ordinary' with the flavour, for a Va; there isn't anything to suggest an additive of any kind.

The nicotine's quite mild, and the room-note's alright: nothing special, but nothing bad.

I rate Robert McConnell with only two stars, but I know there will be a lot of smokers that would give it four!

Age When Smoked: One Month

Basic brown small ribbon cut with a deep tin aroma of tobacco and tea. I've been working with this for a few months now (surprised that no one else has reviewed it!), mostly as a blender but I also smoked 3 bowls straight.

As a straight smoke, this produces a fairly rich but mellow non-sweet flavor with no discernible complexity and not a ton of character. Pretty basic stuff. This would work in place of OTC blends for a "set it and forget it" smoke. As a blender it did very well, as it was relaxed enough not to get in the way of whatever condiments I added but also because it had some oomph of its own. I found it quite complementary to my amateurish blending experiments. Interestingly, this shown brightest when mixed with toasted burley. The two's mutual toastiness worked together masterfully and the earth of this one mixed with the nuttiness of the burley resulted in a kind of dark wheat nutbread flavor that was compelling. Great fall weather outdoor smoke. Overall, this works as a demure base for other tobaccos - it stays out of the way but does add some body and texture. It was cool mixed with some oriental Drama leaf as well, but a sweeter Virginia mix works better for me. This won't supplant the McClellands Blending Virginia for me but it was a nice change of pace, and I will probably mix up more of the PV/Burley to enjoy on occasion.