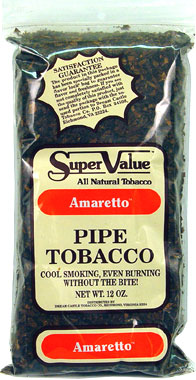 Super Value Amaretto is a mild-to-medium mixture of quality light tobaccos from around the world punctuated with a pleasant Amaretto liqueur top dressing, for a soothing and relaxing smoke.

The grassy, citrusy Virginia is the base of the blend. The nutty, earthy burley plays a support role. The unsweetened black cavendish adds a little brown sugar. The amaretto topping tones down the tobaccos a bit, but it lacks a little depth. The nic-hit is barely noticeable. Won’t bite, but will get slightly warm on the tongue if puffed fast. Burns fairly cool and clean at a reasonable pace once dried a little, and the flavor is consistent to the finish. Leaves some moisture in the bowl, and needs a few relights. Has a pleasant, very short lived after taste. An all day smoke. Two and a half stars.

The coarse cut mixture comprises mainly chunky ribbons, there isn't any pieces I'd qualify as being still in broken flake form. The nose is quite powerful, being an aroma that makes it clear instantly what this has been flavoured with: amaretto. The tobaccos moisture amount looks good, so I can load and light imminently.

Okay, my initial thought was one of how this isn't a bad smoke, at all, for the money: the flavour has a good note of amaretto to it, with some honey from the Cavendish, and the smoke's fairly thick. Then it started to bite, after about three minutes, and that justified the price, to me. Not only does it bite, it burns horribly hot. In all fairness, after the charring light, I find every aspect of it deplorable.

The nicotine's mild, the room-note's ok, and my tongue's now hurting.

Some 'bargains' are exactly that: a bargain. Others, like this, are an example of why cutting the cost often cuts the pleasure.

Well I can tell you this is one of the "lee-quoor" flavorings of SWR Aromatic. I like SWRA, so I like this. Very similar tastes at certain parts of the bowl. This is my favorite booze flavored tobacco. It is sweet and will tend to burn you because the sweetness and flavor is enticing, you almost always go to aggressive. Overall I've always been pleased with this blend. I do not really care for the Whiskey version that Super Value has, but it blends quite well, and interestingly with this, as does the Black Cav, Cherry, and Rum. The Amaretto is flavorful enough on it's on to purchase by itself, but I can get some pretty darn good Aromatic blends with these, that I personally smoke often.

The tobacco was rather moist from the pouch and after 2 hrs of sitting out it was still quite most..that being said I still loaded a large bowl and started to smoke. The tobacco lit without much effort and the bowl gave out a huge cloud of smoke. The tobacco burned a bit hot so I slowed down and once I did that there was no problems with a hot burn. Flavor wise the amaretto was present but it needed more body...maybe more burly or some other flavor to mellow out the sweetness of the topping. The wife was sitting next to me on the porch swing and said that she didn't even notice the smoke and the aroma was light and not overpowering..Overall a strong 3 star for someone who likes sweet aromatics. A good 2 or 2.5 star for someone willing to take the initiative cutting it with something else and willing to find that extra body that is lacking. Smoke it slow and you will be rewarded with relaxing and pleasant smoke that will not break the bank. For the budget smoker this is one for you!

I decided to buy a 12oz bag from CupOjoes of this Super Value Amaretto after seeing some reviews from youtube and I must say that I like it, it is an enjoyable smoke. In the bag it has a great, sweet aroma of amaretto, it presents a little moist and fluffy. It packs really easy, and, for me it taste what it smells and a little bit of honey and coffee maybe. Cool burning, no bite, like as it says in the bag. Summing up, it is a good cheap tobacco, with a good flavor and an acceptable room note. I think (for the price) it deserves a try.

Sweet smokes every one.