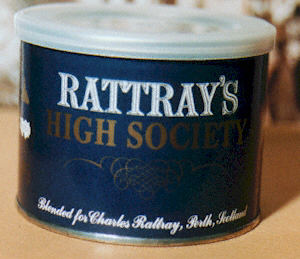 This tobacco is made from the finest Virginia, blended with burley and black cavendish. The aromatic vanilla flavor makes this smoke unmistakable ans is known to have even spoiled even the most particular of connoisseurs.

I think a very slow puffing cadence will bring out the Vanilla flavor of this blend. It burns slowly for an aromatic (probably due to the cut and fine leaf qualiy), and the natural tobacco flavor of the Burley and Virginia will come through.

It sure has a wonderful room bouquet, too!

As with all Rattray's, high quality tobacco, gone to waste by cheap chemicals that scorched my tongue, burned my pipe and turned any Borkum Riff blend into a worthy competitor. Its only good point was a dry smoke that ended up in grey ash, but what less could I expect from Rattray's tobacco. If they can't make me like an aromatic then I give up, it's not my league.

A little anecdote: my wife is a cigarette smoker. A while ago, I handed her a VaPer and explained her how it was high quality cigarette-like tobacco with a touch of Perique, bla, bla... Today, she was really pleased at HS's room note and asked me for the pipe to try it. After a few puffs, she said: "Mild, but not bad. This is not much of a Virginia, but it sure's got some Perique". I almost fainted.

When I read that this had a vanilla additive to it I can't say I was overly excited: "whoop whoop another Vanilla aro' !'", but when I considered the fact that I have always found Rattray's blends enthralling I felt I would be doing myself an injustice if I didn't try it! Is it just another Vanilla blend or is it (as the name implies) a higher class? Lets see ! I have had the pleasure and sometimes displeasure of sampling a good quantity of vanilla blends and often the unlit aroma doesn't emanate much in the way of the afore said additive, however this is a more special in that field, the moment I sample the unlit aroma the addition of vanilla is unquestionable, so full if blindfolded you could believe that this is edible!

I light mine up and realise imminently that the burn is incredible, steady, even, not too fast and as the bowl burns I realise that I haven't had to keep re-lighting it, only on occasions when I have let it sit without a puff. The taste is strange, it's not as potent with vanilla as I expected from the first whiff but it has a fabulous and soft vanilla flavour which also has a honey-esc sweetness to it as well, in fact I would think it had some form of maple/caramel topping as well! This flavour is very consistent throughout, I don't notice any fluctuation in the taste at all. High Society has a great nicotine amount, an absolutely "dead on" middle amount , so if you, enjoy "N" this is perfect when inhaled but if lady N fills you with trepidation by not inhaling the smoke you can enjoy this awesome taste without nicotine impinging your enjoyment. If this delicious smoke is retro-haled then the vanilla/honey flavour is really embellished to a superb volume! The temp' of the smoke is great: it's not too warm, not too cool, but perfect. The aroma in the room whilst this is smoked is totally resplendent, I don't particularly get much vanilla but what I do get is a very even split of the tobaccos with a magnificent sweetness to it. The ONLY negative I find isn't at all objective, hence why I deduct no points for it: tongue bite. Granted, it doesn't bite unless really strained hard and even then it is more of a slight "nip" rather than a massive sting, so I just go slightly gentle with it, but not so gentle as to impugn my smoking pleasure!

At the start of this oration I asked "is it of a higher class as the name implies"? The answer to that is very easy ..... Oh yes, it is a high class !

Smoke a bowl of this delightful blend this morning. In my Dr Plumb pipe.

On opening the packet(i bought it loose). The aroma i got was honey. Even though its suppose to be vanilla. My girl friend. Also agreed with with me, that is smelled like honey. It is a little moist in the packet. Compared to other tobacco's.

Smoking was a surprise. As i had read the reviews on here. I wasn't expecting much. But to my surprise this is the best tobacco i have smoked to date. I got no tongue bite. The tobacco burns very cool indeed. One of the coolest i've smoked. The flavour i got in mouth. Was of honey and oranges. Sometimes with a hint of vanilla. This flavour. Never faded for me. Not completely, not even at the bottom.

Would a recommend this tobacco. Yes. This will probably now be my go to tobacco.

Another good aromatic, very pleasant as far as room aroma and not too bad for the palate too. It isn't biting at all, burns cool but it becomes bitter towards the end of the bowl, when the vanilla flavour vanishes.

I like this for taste, after taste, and smoothness, with a little KY spread in there with burley. Fairly kind to one's tongue given its primary components are Virginia, Burley and Perique.

Similar Blends: Unique in my experience.

It is a same this one is out of production! That stuff is great! The Kentucky/Vanilla combo is unmatched! A tobacco with full character, quality leafs and light sweet casing! I give it the the full rating as it cannot be found! Means that, if you find it, BUY IT!

I smoked this tobacco in a quiet situation very slowly.It burned very well and his taste was absolutely good with a typical Virginia flavour.

An interesting aromatic, somewhat like Radfords "Sundays Fantasy" but with a more purely vanilla aroma, whereas SF has a little fruit in the casings. The cut is irregular, large pieces of leaf in places, little shreds mixed in, but not so purposefully unusual as SF.

I was hoping for a little more flavour with the Perique and the Kentucky, but the taste is like so many heavily cased aromatics- thin and steamy, sweet at first, but becoming bitter as the vanilla departs toward the end. It smokes quite fast considering the cut, and leaves a wad of soggy dottle.

Lovers of very mild cavendish aromatics may be able to get this to work, I just wish I could get Dunhill BlacK Aromatic again...

HS is, at least to me, in the same vein as Charles Mixture (see those reviews). I tried this when a friend of mine bought the last tin on the shelf at the tobak shoppe where we worked and I'm glad it was his money and not mine. I'm sure good quality leaf was used as with other Rattrays blends, but IMO, they should have left off the Vanilla casing and it may have been much better. It wasn't too bad for about the first 15-20 minutes but then things kinda went South. Though not excessively moist (goopy & sticky), even with relaxed puffing HS tended to smoke hot, bitey and sharp with a somewhat charcoal like aftertaste as you smoke down the bowl; drying some for a time helped a bit but not much. There was a tobacco taste mingled in the flavor, but it seemed to be clouded a bit. Maybe it's the way it was cased or the type of casing used, I don't know. Maybe just my taster. YMMV. My pipes have always been kept clean so I won't blame that factor. It seemed more flavorful than Chas Mix, and given the two to pick from I'll opt for HOTW, BC or OG anyday. ;o) Nuff said. HS doesn't work for me.