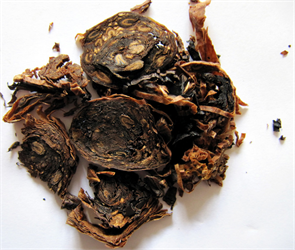 Translated from German via Motzek's website: " Strang Curly, pure " (cut) is a specialty, such as are found only rarely: fine Virginia, filled with dark burley were spun with a spicy, but mild perique. These connoisseurs we provide you cut or skeins.

Notes: This sliced version of Strang is mostly the same as the uncut, which looks like a big cigar.

This is the coin cut version of Strang, and one would think it would taste the very same since it's the same as the rope, and it mostly does, but not quite. The lead component is the very earthy, slightly sugary, very tangy dark fruity, woody, vegetative, herbal, floral, spicy, tart and tangy citrusy sweet brown Virginias. They are amplified by the strong nutty, earthy, woody, mildly molasses sweet burleys, and further fueled by a blast of earthy, plumy,raisiny, figgy, very peppery perique. I suspect a little sugary black cavendish is present as well. Those aspects seem a step less potent in the coin production. I also taste a mild sugary-like sweetness that is less obvious in the uncut "cigar" Strang. This version is a little more fruity as well. As air permeates the cut version in a way it doesn't when uncut, I believe this causes some loss of strength. So does the mild sweet (sugar?) topping, which I assume is used to keep the tobacco moist. The nic-hit is a step shy of medium. The strength and taste levels barely reach the medium mark. No chance of bite, though it does have some rough edges. Burns at a moderate pace, clean and cool with no harsh or dull spots, a very consistent, well balanced fruity, spicy, rugged flavor that translates to the pleasantly lingering after taste. Leaves little dampness in the bowl. Requires an average number of relights. The room note is a little stronger than the after taste, but not as potent as it is in the rope version. Unlike the rope, this can almost be an all day smoke for the veteran.