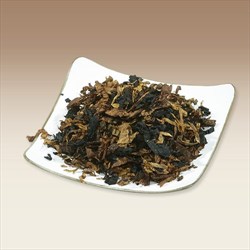 From Pipes&Cigars website: A classic blend from England offered a robust latakia and Oriental-laden experience, but it sadly disappeared. This reproduction made of bright Virginias, Macedonian Orientals (including yenidje), latakia and some dark-fired leaf, will recall memories of the old, black tin.

The Match is fairly close to the original with a few exceptions. The Match is a little sweeter and the Cyprian latakia a little less prominent. The Match has a little brown sugar from the black cavendish which the original did not have. The Virginias are about the same; a little grassy with a slight citrus sweetness. The Orientals in both were dry, woody and a little spicy, though there is a little dark fired Kentucky in here to aid in those qualities. The latakia in both was smoky and woody, but in the Match it is a little sweeter, probably because the original used Syrian latakia, whereas the Match uses the Cyprian variety. The yenidje in the original had a floral unflavored “soda” note the Match lacks, but as I have not noticed that much in recent blends, I wonder if the strain of yendje has changed in the years since both Balkan Sobranie and the 759 were made. The nic-hit is mild. Both versions of 759 burned at a moderate pace, clean and cool with no harsh or weak spots and little moisture left in the bowl. Needs few relights. No chance of bite. Has a pleasant after taste. More or less an all day smoke.

I gave the original four stars.

Have not smoked the original so no comparison is possible.

Orientals lead by a small margin and I do detect some floral notes from them. The Latakia and the Kentucky seem to be pretty well balanced. The former adding a mild, woody smokiness and the latter adding an earthiness and depth that is very welcome in this blend. The Virginias add a mildly sweet base with just a touch of fruit. All in all a very tasty and pleasant smoke. Very well done.

Medium in body. Medium to full in flavor. Burns well and moisture was just right for immediate smoking.

Based on the positive reviews here, I ordered a half pound before I had even sampled this.

Fairly uniform cuts of ribbon, with minimal large chunks. Majority of medium brown leaf, with specs of bright Va and black dark fired. Pleasant smoky aroma, with a slight odor of burnt sugar. But not in a bad way, think Crème Brule.

Packs well with a lot of spring. leaves fingers a bit sticky from the natural tobacco oils, not from humectants. Light, tamp, light, and I was able to settle into it.

As others have stated, the Turkish really stand out in this blend, and does truly offer some slight floral notes. The Kentucky seems to offer a molasses sweetness, and just a little tang/spice from the Virginia. Smokes clean and cool, never wanted to bite. Applause again to the Turkish for leaving a cool, minty feeling on my tongue. A couple bowls burned a bit uneven for me, probably due to a large hunk of tobacco packed off to one side. This is a great evening/ pre-bedtime smoke. Even though I don't see myself smoking this all day, I don't see this 8oz lasting that long!

My experience with the original blend was from the 60's , way too many years ago to remember details. I'm actually reluctant to make this posting as my recollections don't agree with most of the previous reviews and comparisons .This match was a little one dimensional, I seem to remember the original had that special winey fruitiness that sneaked in and out around what was the ample Syrian Latakia, ( maybe also a touch of Black Cavendish ?), this was lacking in the match ? My memory could be very wrong, but I thought the original was closer to McC "Aston Revival Old Dog ", or " Balkan Blue" ?

Now that I told you what this blend isn't like, on its own, this is an OK blend. However, I did find it to be an uneventful smoke. The ribbon cut makes for easy packing and has a good burn at a sip. Not a heavy Latakia, but well balanced with the Oriental and Virginia, although, I do have to really search for the flavors.

I also feel this match needs some aging as it has some harshness. I do like the "BS Original Match" better. By MY rating system, this gets 2 stars, as I probably won't buy again, not that it's bad , I just have other blends that fill this niche better.

Revised 7/29/2016- After over a year in the cellar this has improved. The flavors are smoother and more distinguishable. Personally there are better blends to give cellar space to, however, this now is a 3 star blend that I will retain as 2 star from my original experience.

Trying some of this as i write - 2nd bowl in a meer.

Flavor: rich, complex, leathery with a hint of hardwood smoke. I have not tried the "original" 759 so I can't compare. One thing I did try was a 50/50 mix of H&H Black Horse and McClelland Blue Mountain, which is purported to be a pretty good facsimile of the original 759. The H&H "match" is pretty similar to the 50/50 match, and both are quite nice.

Burns well; a bit too fresh as it made for a little moisture buildup, but not objectionable.

Purchased From: gift from co-worker who bought from P&C.

I never had the privilege of smoking the original so, this review is about the match blend . The Subtle sweet with a little citrus Virginias mate well with the floral slightly sour and fragrant orientals . The latakia is proportioned very nicely with a light hand . The Kentucky also light but adds a nice spice . Strength is in range for my taste . The yellow Virginia and the orientals are the lead with spice and campfire backing up nicely . Gets better near the bottom of the bowl ! Oriental forward great English blend !! 4 stars all the way through . I like it more with each bowl . .....................................update 2 /23/20 I just cellared a pound of this . This is great tobacco . I never tire of this masterpiece!!

Don't know what to say. I was shocked from very first puff. Tart but same time sweet, soft but spicy, full in taste but very delicate and with extremely pleasant room note. What a mixture! Love it. Can't say anything negative about this tobacco.

Reviewing match blends is tricky business . Even with a sample from days gone by it is still a hard job . Often the sample has been in the can many , many years and has changed from what it was over time. Relying on memory of the taste is often blocked by the years until it becomes a fragrant memory . We need to realize that the tobaccos of years gone by are no longer available , especially Syrian latakia. I smoked Balkan Sobranie as a young man over 40 years ago . I remember that it was moist upon opening the can and needed to be set out on wax paper for a time to render it smokable . Once prepared it was a high octane latakia with an after taste like no other . It was what , I thought at the time , well balanced with quality virginia and " orientals " . Back in the day the orientals were never identified except for "Turkish " which could mean any number of tobaccos . The smoke was tangy and deep and made for slow sipping . By the mid 1980's I left latakia behind and smoked only pure virginia or Va/Par blends and never returning to "English blends . Recently , in my old age , I have returned to those thrilling years of yesterday and English Lat blends . Of all the new ones I have tried this one stands out as the best . Real depth , the kind of quality you get only in the best of the best . Lingering taste , the kind of taste that invites to slow puff . Not complex , in that it is mostly the same experience throughout . That beautiful white after ash you find in the dottle . The satisfied feeling you have after a great smoke . Is it like the original B.S. 759 . Who knows? I cannot exactly remember the taste of a tobacco I began smoking in , maybe , 1962 . It had the feeling of B.S. and the satisfaction too so , frankly Scarlet , I don't give a damn . If you can still get this, buy some . If you can't , add it to the list of fragrant memories .

Although a ribbon cut mixture there are a few leafier pieces included. Also, the ribbons are quite coarse. The aroma's one of a sharp English (which transpires into the smoke), and the moisture looks good.

The Orientals are prominent in the smoke, but as well as a fragrant flavour they have an equal amount of sharpness; this lowers my rating. The Kentucky and Latakia are conjoined, creating a 'hot', smokiness; quite exuberant. There's an unequivocal flavour of lemon emanating from the Virginias; quite caustic, a good compliment to the Orientals. It burns at a medium pace, with a spot of bite.

Match 759? Too sharp an English for my palate! So, two stars:

As I opened the bag I detected a sweet note to it, so I thought some kind of casing was added. It was only later on that I realized the sweetness was rather coming from the black Cavendish it contains. I was surprised to learn about this because the description provided by smokingpipes does not give you any indication this component is present in the blend. I have never tried Balkan Sobranie 759 Original, so I can only judge this tobacco by its own merits. Yes, it is rather good and has some creamy qualities to it, but the Balkan side of the equation is so pushed back into the background it really makes you wonder if you are smoking an English blend or something else. This is not necessarily a bad thing though, it all depends on what you want depending on what part of the day, your mood, etc. I suppose some kind of casing might have been added after all, such as a humectant, alcohol, etc., but I cannot detect any flavourings apart from the aforementioned black Cavendish. It does not seem to produce massive amounts of dense and rich smoke, but this might as well be down to how moist it came in the bag. Had I been the master blender myself, I would have included unsweetened black Cavendish instead of the sweet variety it contains, but I have thoroughly enjoyed it anyway. Yes, I can see myself revisiting this blend time and time again. Four stars this time.

This is the bulk version of H & H Black House. I find it basically the same. Except the 759 is a little dryer. Since Black House is my favourite along with Presbyterian this bulk version is a huge money saver. Highly recommend.