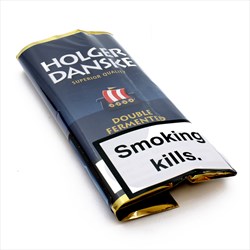 For this offering Holger Danske have opted for a Danish/American style of moist and sticky sweet black cavendish. The tobacco is first fermented at the plantation before being given a second steaming at the (Planta) factory. This dual fermentation results in an extremely mellow and cool smoking tobacco. From the pouch you are greeted by a sweet aroma of black cavendish with an underlying aroma of nougat, chocolate and raisin.

The mixture is mostly black pieces but it does contain a small proportion of light yellow ribbons which stand out as they are much larger than the rest. The topping comes across very full in the aroma, it smells real sweet but there is also a plum/prune addition in the smell. The mix is only slightly moist, not 'wet' but a very short airing benefits the burn.

Once lit the flavour matches what I anticipated from the aroma, it has a sweet taste with a slight fruity addition, I use the word 'slight' exactly as it is intended! It burns good, it doesn't keep going out but holds the light well. The temperature of the smoke is just what the description says... cool! The nicotine isn't much in this one, pleasantly mild or extremely feeble, either description fits the bill! Onto a lower point, the room note, well to be fair the note isn't the problem as that's OK as it's a quite standard sweet black Cavendish one but the problem lies with the quantity of smoke, I had my window open and feared the neighbours would call the fire brigade because of all the smoke! Tongue bite doesn't occur to me with this, I can really suck the guts out of it and it still remains cool and bite free. Providing it has had a little extra drying time there isn't much dottle at the end but my first smoke was a little damp still and that caused a small amount.

I can see how some people may not like this as it has the quintessential 'gloopy' aromatic attributes but I find full/heavy tobaccos such as this a pleasing change of pace.

Four stars but only as a rare treat!

Dunno why I bought this. Perhaps in my stupidity I thought this wasn't an aromatic having lost my entusiasm for such a while back.

Meerschaums only for this one then.

To be fair this isn't a bad blend. There are far worse on the market at the moment. But this is clearly a cheap blend and at 5.9 euros it certainly sounds it. The pouch aroma is very strong and sweet. almost as if there was a lot of alcohol in there.

The tobacco is very dark with a few golden flakes here and there and has obviously had the scrapings from Larsens's factory thrown in for good measure. The smoke is typically Danish taste, like you'd find in more expensive blends to begin with, but several bowls of this later will remind you of it's cheap provenance. It burns very fast as well and if you do come across this blend, smoke the whole bowl in one go ; coming back to a half-smoked pipe will result in an insidious after taste.

It's not unsmokeable by any means but I wouldn't want to smoke this on a regular basis.

This is one of a kind, the flavour of it is astonishing to me. I simply love it. The double fermented cavendish and the Virginias smells very nice from the pouch and the taste is very exiting.

Upon opening, the tobacco was on the dry side of being nicely conditioned, so i could pack and light up right away without any hassle. The pouch aroma has some fruit, vanilla, coconut smell to it as well as some chemical / artificial by-smell copyrighted by Planta.

Packing and lighting offer no challenge. Unfortunately the taste of the smoke is completely uninteresting, its sort of artificial fruity/coconut taste with some light sweetness and some very slight marzipan taste every now and then. When you light the pipe you get a dozend deja vus because you had that taste dozends of times allready. Its like all those other heavily aromatised tobaccoless blends with some fruit note to it.

Burn is nice and even. Flavouring lasts alot longer than expected but during the last quarter its time to empty out the bowl. Room note is pleasant but i do not like how intrusive the smell of the smoke sticks to your skin, clothes and hair. Its a good smell but by far not good enough to be used as a perfume, which i am forced to if i want to smoke this blend.

Ghosting of your pipes is heavy as to be expected.

But now for the question we all want to have answered: is it really as smooth to the tongue as advertised? Yes! Yes, it is, very much so. I deliberately overheated it, drew to often, packed it wrong. But it just was entirely unimpressed by all that. It stayed smooth and mild to your tongue, no burn, no nip, no nothing. That double fermenting seems to pay off.

So, do i recommend this blend? Nah, not really. The only reason where i somewhat recommend it is if you are into tobacoless heavy aromatics and every blend so far seems to be on warfare with your tongue. In that case you may give it a try and if its just to give your tongue and palette some peace and quiet.

Similar Blends: Well, its not alot different than any other fruity heavy aromatic coming from Planta or other German / European makers..

Opening the pouch, I see Danish Black Cavendish (that's the sauced stuff, as opposed to English BC), with some VA and probably Burley highlights. The pouch note is dried-fruit-ish and will make itself felt in the room note later on.

For something that is mostly BC, this stuff lights up astonishingly well, and it stays lit until the very end, no dottle whatsoever. As many BC blends, it tends to burn slightly hot. The room note is roasted dried fruits and made my wife drop by and ask for a spoon… The flavour is less sweet than expected, and more malty and spicy.

In the end, for a BC aromatic, this is the best I've had so far. It has flavour, it is not goopy, it stays lit, and the room note is purely brilliant. This is not a style of blend I will smoke very often, but I think I will keep it in stock for the occasional excursion. Recommended for the Aromatics crowd!