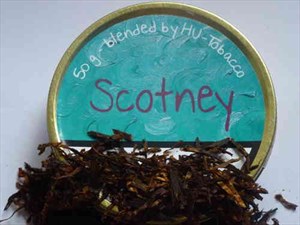 Translation from the German website: Scotney ....dark-brown, aromatic, strong. These are the most appropriate attributes that mark the ready rubbed flake Scotney. A powerful Virginia/Perique ready rubbed flake forms the base of Scotney. A decent topping, which supplements the character of the tobacco best, lends Scotney its distinctive aroma.

Notes: This brand new rubbed broken flake is comprised of three different Virginias from India and 10% perique. The topping is a light touch of vegetable, making it slightly aromatic.

The Virginias are earthy, woody, tangy dark fruit sweet with a touch of tart citrus, light grassiness with a bare hint of cigar. They are the lead components. The perique offers plums, figs, and dried fruit with some pepper in a support role. The amount of perique is ten percent of the blend. The topping is a sweet green tomato that mildly sublimates the varietals. It synergistically melds well with the tobaccos as the flavor is very consistent all the way to the finish. The strength and taste levels are medium. The nic-hit is a rung below the strength threshold. Won't bite or get harsh. This lightly aromatic broken flake is easily rubbed out, and burns cool, clean and rather smooth at a reasonable pace with a mostly consistent sweet and lightly spicy flavor from top to bottom. Requires an average number of relights, and leaves little dampness in the bowl. Has a pleasant, short lived after taste and room note. Can be an all day smoke.

Scotney is an above-average VaPer, certainly better than most competing blends but rather lack-luster when compared to the other remarkable HU-Tobacco blends. The spicy Perique was the first I noticed, followed by the fruit flavor of the Virginias. There is a slight topping mixed in, which I am not a fan of in general, but it blends well with the other components. The topping tastes like a vanilla and fruit type additive that isn’t too sweet, but adds some complexity to the blend. It is not very complex, but will surely give you your VaPer fix. Overall, a solid VaPer and an enjoyable experience, as I continue to sample the impressive HU-Tobacco catalog.

Yet another interesting blend seemingly with a British name and only available on the continent.

This one from HU comes in a well-sealed can, that needed a screwdriver to open it, to reveal a rather dark ready rubbed mixture with occasional gold flecks. The aroma smells like hay, a little grassy, but with a deep dark toffee, or maybe treacle, undertone. Not a million miles away from some of Robert Lewis' darker blends.

It's really quite damp and getting it going is hard work and will soon drain your kindling supplies. It's worth persisting though, and in the biggest bowl you own, it will reward your diligence with a rich, but not overly strong smoke where you can taste the virginias and perique without either one dominating. The blenders have had a light hand when putting in the perique, which I find somewhat preferable to say, the St James' Flake that destroyed my mouth a few weeks ago.

There is a topping as the screed says, which comes through in the tin aroma and is also present in the smoke. I can't even hazard a guess as to what it might be, though - probably wrongly- I suspect something like a scotch or maybe brandy may have been added in very small doses. Reminds me of those brandy snaps you used to get in the 70's.

A good blend, well worth trying if you like a lighter perique blend, but too much to smoke all day. I find two bowls are more than enough in two sittings.

Recommended, but not to die-hard perique smokers.

Even HU sometimes lays an egg and this is it . A virginia-perique with a topping that is basically strong and graceless . The topping ruins what would otherwise be sort of a boring va-per . With the fine va-per selection from HU why would anyone smoke this one ? Maybe it is just that aromatic tobaccos are just not my thing but this one is too strong to be a decent aromatic . I must say that the cut and burn are satisfactory but the overall experience is simply not. Still , it might find a market among aromatic smokers who want something stronger .

On first light this tobacco did not impress, it seemed monotonous and had a flavour on top of the Virginia, not entirely dissimilar to the smell of the veg drawer in the fridge when veg has gone seriously arwy.

However, with perseverance this blend transformed. By half way through it developed a complex array of flavours. A well rounded smoke that casually shifts between delicious VA and that unusual organic element, but never boring.

I don't think I'd get it again, but I enjoyed what I had.

Except for the citrus note, I have to agree with JimInks' review; perhaps through the power of suggestion, I can even agree with the slight tomato-like note in the topping, although I suppose that may be from the processing rather than an added casing and/or topping.