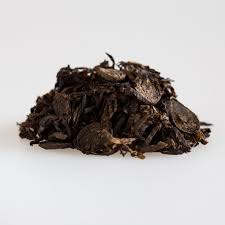 Brown Twist is a powerful and rich Tobacco topped with a spicy Cinnamon topping, making this a flavourful smoke.

This needs a bit of drying first, it's actually quite moist so don't buy any if you lack patience when it comes to airing time! The blend resembles ribbons mixed with small coins so it requires a good little rub once it's dried out some. The cinnamon comes through in the aroma as a spicy addition, it's not massively identifiable as cinnamon but it is definitely spicy.

It lights reasonably well, just a few touches are needed to give a substantial burn which is pretty even. The taste of this is like a very spicy cigar, the cinnamon is easier to discern and a bit less nebulous than it was in the aroma pre-light, it's a very lively taste! The smoke is quite cool in temperature and only bites a touch if strained. On to nicotine now, if you like N then you will be sure to like this! Personally it's too strong for me, a head spinning strength if inhaled! I struggle to identify much character in the room note, it's not offensive but seems to lack the same cinnamon quality of the taste. When the smoking is finished I am left with a cloying taste of cinnamon in my mouth, it isn't really nasty but it does last a while!

For me this sums up an 'OK' tobacco, it's not brilliant, not horrible but simply all right.