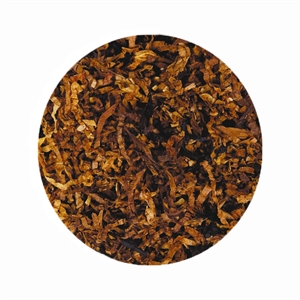 For those who enjoy Latakia with a slight sweet topping. Flue-cured and dark Indian air cured Virginia's along with Latakia, it takes on a whole new direction. The smoke is cool, creamy and packed full of flavour. Moorland gains its unique quality from the addition of caramel and sugars .

There isn't much added sweetness in the aroma from the mix, it smells more like your standard Virginia blend. It has a good hydration level so it requires no airing time.

The caramel topping is really light in the taste, it can be noticed but it doesn't taste as strong as some other blends with caramel in them, it's not at all 'gloopy'! The tobaccos are well balanced with each other, the taste is a 50/50 split between the two, quite refreshing as very often the Latakia will swamp the taste. The nicotine is of a medium weight, it would suit most types of smokers, light enough for taste only guys but when inhaled it can be acknowledged! Sadly I can't really notice anything special to the room note, it's quite light without any discernible features. Moorland Mix gives a good burn, it is a real good blend to smoke if you don't want to have to keep re-lighting but want to sit for a long undisturbed smoke.

When I first tried this I thought " this is only a two star blend" but after a while smoking it I decided it's worth three stars!

I don’t think this tobacco has been given the credit it deserves. Formerly called Exmoor Mixture and Exmoor Hunt, I believe. It’s not a Latakia powerhouse, but what there is complements the blend. There’s a lovely creaminess in the aroma of the unsmoked tobacco and in the taste when lit, which persists. I guess that’s the topping. It’s wonderful. When I became a pipe smoker, it was the first blend I fell in love with. Burns easily and cleanly. I wouldn’t not have it in my rotation.

Age When Smoked: All ages

The name of this blend is perfect, if anything evokes lazily lolling on a summer heathland moor, it is this tobacco. Close your eyes and you can imagine lying back in a tweed suit inhaling the sweet scent of drying peat and listening to the lucky heather swaying in the breeze. It is quite a mild smoke which means many a refilled bowl, It is definitely a summer smoke and I highly recommend having it as a pleasurable sojourn in your arsenal. 8/10

Being a Latakia fan I am always seeking out new blends to try. This was an enormous disappointment. The Latakia is barely noticeable, the blend burns dry and harsh with an overwhelming "cigarette" taste of inferior Virginia. There is no complexity to the flavour whatsoever, just the dry and burnt pub tobacco effect. I attempted this blend in various different pipes, some new, some refurbished estates, but the effect was always the same. Burns like dry hay and leaves an unpleasant "ashtray" aftertaste. I cannot see this getting anywhere near my regular rotation.