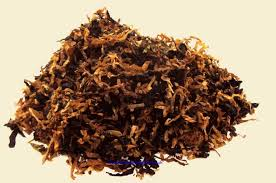 A classic Danish blend of Virginia and black Cavendish is finished off with a ripe and rich casing . Leaves a Fruity room note and sweet lingering flavour in your mouth . Ideal for the smoker with a sweet tooth .

The mix contains a slightly higher proportion of Virginia compaired to the Black Cavendish, not a lot but just a touch more. The aroma coming from it is a little sickly, the peach takes the forefront but there is also an added sweetness lurking behind it which causes the sickly feeling. This one is of a good moisture amount enabling smoking to commence imminently without any airing time.

Once lit the flavour of the smoke lacks that overly sweet quality that was present in the aroma, the only added taste to come through is the peach, which does so in a true 'non-sickly' fashion. Because the mixture arrived at a good hydration level it gives a good burn that doesn't keep becoming extinguished if it's not voraciously puffed. I get no tongue bite from this even if I really 'give it some' and the smoke isn't particularly warm. Throughout it gives a good volume of smoke in both the mouth and room. Whilst I mention the room the note that is created is indeed peachy, as the description says! I find the Nicotine amount to be quite mild, if I require some Nicotine then I have to inhale quite a large amount of smoke.

By no means would I describe this as being a bad smoke but I only score it two stars as after fifteen minutes or so it becomes a little tedious!