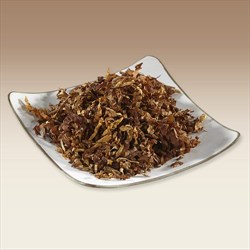 The Match is chocolatey, molasses and nutty, though a little less so than the original in those respects. The burleys are the stars, but there's a hint of grass and a little dark fruit and earth from the Virginia. The cut and look is identical. It burns a little cooler than the original, and while it does not have the syrupy flavor (and occasional chemical note) of PA, there’s a slight alcohol feel in the topping in a few spots. The level of mildness is the same, and the flavor is consistent to the finish. Has little nicotine, and won't bite. Burns at the same rate as the original (moderate) and leaves a similar, lighter aftertaste. needs few relights, and leaves little dampness in the bowl. The original tends to be a little cigarettish at times, a little more so near the end. That’s not true of the Match version. If the chocolate, molasses and nut flavors were a little stronger, it’d be hard to tell the difference between the two, chemical, cigarette and syrup hits of the original not withstanding. This is lighter in flavor than the original. An all day smoke. I gave the original three stars, and this gets two and a half stars.

I received a gift of 4+ oz. of this, and I have been enjoying it. The cut is mostly a medium chopped ribbon. I think the ribbon may be a little wider than Prince Albert, but I don't have them side by side to compare. It came at a great hydration for smoking, codger scooped readily, etc.

This is a great OTC-style burley-based smoke. It has a mild and pleasant taste. It is easy to smoke. There is a little cocoa and some molasses. It does not have a bitter edge at the bottom of the bowl and invites a reload for another bowl when you finish it. These are all great qualities in this type of tobacco. Strength is mild to medium on the mild end of things.

Compared to Prince Albert, there is no chemical note on lighting, and Prince Albert could get a little ashy at the end of a bowl. The Sutliff has a pretty consistent flavor and no ashy tendency.

I think Prince Andrew has a little more flavor and some more of the molasses, but they are very similar. The Prince Andrew may have a slightly narrower ribbon, but again I don't have them to compare side by side, so I am relying on memory. These memories are based on tubs and not bowls.

If you are going with a Prince Albert match, I would suggest the cheaper one, just because that is my style. This is very easy to recommend.

When I saw the description of this blend's top flavoring as "Cocoa / Chocolate, Nuts / Beans," I could not suppress a chuckle at the idea of bean-flavored tobacco. The bean in question is the vanilla bean, and that is the primary taste you will experience here. As an unabashed fan of "Prince Albert," I was excited to try this substitute, which is not a great match but a really excellent tobacco on its own. If more aros were like this, what we might call a "semi-aro," I would smoke more of them. The primary flavor is Burley, with less of the condimental Orientals and Virginias that "Prince Albert" uses to condition the broader flavor of its major ingredient, topped with some cocoa but a lot of vanilla, which is sort of the universal ingredient in American aromatics. The result tastes like a "s'more" from your campfire as a teenager. The vanilla roasts with a marshmallow type flavor, followed by a gentle chocolate, and then the toasted grain flavor of a medium Burley mixture, mostly white Burley with some dark to give it richness and volume. Since the topping is lighter than in "Prince Albert," which haters allege is to disguise the low quality of the leaf, it burns even more easily and leaves less dottle and moisture behind. For most, it will scratch the "Prince Albert" itch because it is a smooth burning, low-bite Burley blend that you could smoke all day without fussing over it. The somewhat raisin-y flavor or possibly bourbon flavor of the original is missing, and for the most part, is not really missed. While it might be nice to have more of the Oriental and Virginia influence, this is a tasty blend that I find myself quite content with.

It had been a long time since I smoke the Prince. Almost 40 years. But I remember the original taste in it wasnt offensive, had a vanilla, cocoa and nutty earthy smell in the bag, had tendency to taste of cigarettes when being lit and for me swung from a sweet smoke to a bitter aftertaste with slight chocolate and vanilla background taste and a earthy taste. How does the Match compare?

When I pulled it out of the humidor it had a slight vanilla, cocoa, nutty smell with a nice earthy tobacco smell. The tobacco was dryer than most coming out of the humidor that I buy and I still let it dry on a paper towel for a half hour.

I lit the tobacco and was met with a slight cigarette taste. It was immediately followed by a light cocoa, vanilla, earthy with a touch of grass taste. Now these were background tastes and the tobacco taste was prominent. The room note was very nice for those around me.

As the smoke progressed I had to relight the average amount of times for I was trying to sip. Even sipping this produced a lot of billowy, bluish smoke. As the smoke progressed the taste became sweeter with a more deeper chocolate and light marshmallow taste followed by a sweet taste during exhale and the bitter aftertaste I remember from years ago that came when the smoke was gone. So sweet, yet bitter.

The tobacco seemed to burn a little faster than most other blends do. Did not bite but I found the relights do give me a cigarette taste when relighting. When the bowl was finished there was just a touch of moisture. The tobacco burned to gray ash.

To me the match seems to be a bit lighter than the original in taste, flavor and not quite as smooth as the original. The Match is a very nice blend and close to the original. The sweet taste was fantastic but the bitter aftertaste and the cigarette taste when lighting really left a bad taste in my mouth literally and symbolically.

For Prince Albert fans this should be a close match. It is a fine tobacco but with the bitter aftertaste and cigarette taste when relighting it just isnt quite my cup of tea to make it a part of my rotation. With the exception of no licorice this match does is a fine job at matching Prince Albert as I remember it.

For those who like Prince Albert I highly recommend it, for those who do not I recommend you try it. It has some great traits such as the chocolate marshmallow background tastes that make it a sweet smoke with a earthy, burley taste that is sweet while the smoke in your mouth. For me the bitter aftertaste and cigarette taste when lighting keeps it off my favorite list although I will buy it from time to time. 3 stars for matching Prince Albert and a 2.5 stars for what I experienced personally.

Wish I could get a pouch of the original Prince Albert but I don't really want to spend the money for the large 14oz can. I've never had the original but this Sutliff Match was good.

I used a clay pipe, the tobacco burned really nicely, was smooth and had a subtle sweetness, chocolate, and nutty flavor. Have to be careful not to smoke it too quick or could get some tongue bite. The nicotine hit was more than I typically get with the average aromatic that I've tried. The room note was really pleasant. It reminded me of a summer night waiting for the firework show to start while an onlooker or two smoked their camel cigarettes.

I will certainly smoke it again and hopefully someday I can get my hands on the original.

Arrives somewhat wet and a bit goopy on the fingers. The tobacco is medium to long ribbon cut.

Bag aromas of chocolate and nuts. Some booze is detected as well.

The pack is easy. I prefer to smoke it still somewhat moist and pack it in clumps while twisting them into the pipe. Lighting is easy and there are no troubles keeping it lit. Some relights are required but otherwise it just keeps going.

Initial flavors of the topping are booze, chocolate and vanilla. The toppings hang around for the first half but do fade to a quiet nuance. This is best sipped slowly to keep the flavors going or it will burn ashy. The second half of the smoke is slightly nutty Burley and some cocoa. The toppings are a whisper at this point for me.

The chance of bite is low but it can tingle a bit if pushed. There is not much moisture at the end and the ash will burn to a fine white, grey colour. Overall, this is a good old school blend but for my taste there are better. I do recommend this to anyone looking to find a simple Burley based blend with a nice non dominating topping.