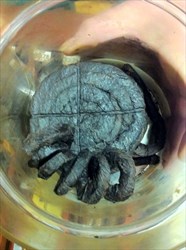 Produced by hand spinning Virginia leaves into a rope. The rope is pressed and stoved until pure black. The resulting tobacco is very smooth and cool to smoke with a leathery and almost unsweetened cavendish undertone. A strong tobacco many novice smokers won't get along with.

This one was a fun one to watch "others" prepare. A pipe club member who loves G&H blends and somehow manages to obtain their most off-beat stuff, showed up with a piece of pig tail a few years ago and that's exactly what it looked like. My notes indicate that it took forever for shards to be presented to members to load and light up. I did not need my notes to recall the impact of the tobacco. My palate was hit by a sledgehammer bowl with every puff. I never cried uncle and smoked this one to the bottom. It did take awhile for me to get my bearings once I got up to leave (hope I was legal to drive). Strong and powerful, almost campfire taste of Virginia leaf. You've got to try this once in your lifetime... of course, once may be just enough to topple you for good.

Firstly, if you buy this be prepared to give it a while to abate the water content a touch! The Pigtail itself is a thin twist in build, and when I take a sniff at the beginning I can tell straight away that this will be a hearty smoke; it seems to exude total strength! Because this is quite delicate in thickness it is fairly easy to prepare, I use a pair of scissors to divide it into small slices which can then be rubbed simply into a great consistency to smoke.

Lighting this up is surprisingly straight forward, surprising because mine was still a little moist, I hadn't let it air long enough! The first puff attests what I suspected about the strength, oh my goodness this is a bad boy! That said, it can be enjoyed without rancour by not inhaling deep puffs! The flavour is actually a touch inimitable: there's a good and full Virginia taste but what is more unusual for a straight Virginia is that in the background there is an almost liquorice taste which is heightened if the smoke is retro-haled, but if sucked too hard it can become a little acrid. The smoke from Black Pigtail is one of the cooler in temp' that I have had, and you don't have to suck that hard to get a good mouth full of smoke. It stays lit well, but I guess that depends upon the preparation quality and as it burns down this leaves behind a pure white ash.

I feel that the flavour from Black Pigtail is a good, but the reason this doesn't get 4 stars (for me) is the strength: you would have to have a stomach of iron to have this as your regular smoke!

This is a badass tobacco from Gawith & Hoggarth, so don't smoke it on an empty stomach: its nicotine content will knock you off your tail. The added flavouring is rather mild as opposed to GH's brown pig tail, which is quite apparent from the very beginning. GH is selling it as chewing tobacco, so it is quite moist and needs drying before being able to smoke it. The best way I found to achieve this is by slicing in it up with a sharp knife and let it dry after you give it a good rub. Something you will notice is that this blend will stain your knife, so don't use a kitchen one. For this task you can pretty much use the one that comes with your tamper or pipe tool.

I am finding many similarities with GH's brown pig tail. For one thing, it reminds me of some cigars and the Virginia in it tastes more or less the same. Also, it burns quite fast in your bowl but, surprisingly enough, the smoke is quite cool. I know this tobacco has a topping of rum and maple syrup, but I cannot detect any other flavourings apart from the Virginia. GH does not recommend this tobacco to beginners, but I think it would be quite suitable as it won't bite the tongue. The tin note, which is quite fragrant and flavoursome, sort of foretells what it is going to taste like in your bowl. Because of its nicotine content levels, I think this tobacco would be more suitable for small bowls as it tends to fill you up very soon. Less than an hour with this tobacco will probably leave you satisfied, so choose the size of your bowl wisely. I am thinking this tobacco would be more suitable to make small size cigars because of its intrinsic characteristics.

Age When Smoked: I'd say more than a year

Pig tail for chewing but I smoke it..

Bought loose weighed in a Barnsley Yorkshire sandwich shop which sells carnival gear for Saturday night on one wall and mans tobacco on the other, with fresh made sandwiches and rolls at the end; a Northern England former mining town where no doubt this stuff was chewed plenty down the pit in the good old days.

Really easy to work with @3/8" / 8-10mm diameter skinny rope that I use a cigar cutter to produce mini coins 1mm thick with, and just chuck them in my little falcon pipe bantam stem with rustic bulldog bowl.

Being a small diameter rope I don't have to rub this out at all, the small coins produce the same effect as cube cutting a thick flake.

The taste in the pigtail compared to the twist might be spicier I recon; the outer leaf to core ratio might have something to do with this; it might be the same law as cigars, but might be other atmospherics .

Taste:- Undeniably one of the most meaty , and I mean MEATY as in meat , smokes I have experienced. There are only a few that imitate meat by accident of their design and this is one of them.

Burnt pork sausages on a carbonic BBQ grill with Burning caramelised fried onions and big load of ground black pepper and salt.. It is spicy in a kind of Worcester or houses of parliament 'HP' brown sauce way as well. Tastes like a hotdog from Heaven!

The room note is my pleasure not yours if you are in my house. This is like a motorway layby greasy fastfood caravan crossed with a paraffin Feuerhand Storm lantern with a wick that needs trimming.

The nicotine is undeniably strong but not as knockout as SG black twist. If SG was 9 on the nicter scale ,this GH pigtail is about 7-8 strength..

Solid dependable all weather conditions baccy ,indoors or out.

Be careful of fire alarms and caged birds.

Total 5 stars for this little number.

Age When Smoked: New,Months,Couple of years.

This is in the same ballpark as GH's Black Bogie Unscented, so almost everything I wrote about that baccy applies to this one as well. With the following exceptions:

This twist has a smaller diameter than its Bogie cousin. Perhaps because of its greater surface area to volume it comes drier than the Bogie. Still, giving it a little air time won't do any harm and will deliver a less trouble free smoke if you do.

It is said to be unsweetened, but it does strike me as sweeter than most of the other GH ropes and twists I have tried. Not sweet in a citrus or fruit sort of way, but sugar. And not molasses or demerara sugar either but simple sweetness, like white sugar. This has some benefits for the flavour because it brightens the tarry, fire cured notes, and that strange coal-like smell these black ropes and twists have.

I'm not a fan, generally speaking, of these ancient style tobaccos. There's a reason their production is restricted to a handful of companies worldwide. It's a niche product, at least for pipe smoking. Might be different for the baccy chewing community.

The upside is that properly aired it's a well behaved tobacco. It does burn cool and it doesn't bite. But you'll probably be in a minority if you genuinely enjoy the coal tar aroma.

Purchased From: Segar and Snuff in London

Great stuff, I just cut some coins about 1 mm or less and rubbed them up stuffed a pipe and was instantly delighted. A proper pipe tobacco strong but smooth and cool. You do not need to constantly smoke this to feel like you have had a smoke but it tastes so good you probably will. Thick but not to pungent think Full vg Flake with big hairy balls. The taste is full vg and rich and creamy with the earth of full flavour and strong tobacco the effect is stimulating and awakens your senses. If you Err on the darkside like me then you will probably love this small twist.

I have to say the strength was not as full on as I expected. I have some dunhill royal yacht that I can hardly handle this however is not even close. The Brown twists are stronger.