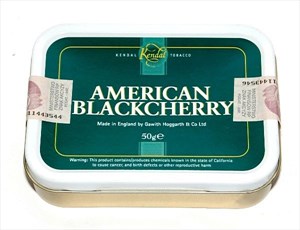 A well balanced blend of black cavendish, burley and Virginia with a classic black cherry flavoring.

Notes: Due to EU regulations, this is renamed and sold in those countries as "American BC Blend".

Funny how a tobacco can change so much given the right airing time. This is in my top 3 tobaccos of all time.

I first bought a sample of this stuff and when I lit it up it was like a soggy cherry soup. I nearly threw the whole lot out, but instead, put it back in the box in its wrapper and forgot about it. A number of weeks later I saw it and opened up the wrapper to look at it. It had dried out significantly and seeing as my tobacco stock was low I stuffed it into my pipe and lit up.

This tobacco really does need a thorough drying out, stopped just before it gets crispy. It dries very well, probably due to its inherent sweetness. It smokes smoothly as silk, it is mild mannered and the beautiful cherry flavour does not burn off the second you light it. There are slight undertones of marzipan in the mix and it's just a tasty smoke you can really just relax with.

If I could only smoke three tobaccos from this day forward, this one would be in them.

Please give it a try and let me know what you think. Just make sure it is dry!

Pipe Used: every pipe in my stash. Works well in small pipes.

The pre-light aroma from this is pretty standard for a cherry aro': a good cherry note with a quite pungent Cavendish whiff too. On the less less positive side this could use some airing time: it's not saturated to the point of feeling wet, it's just a touch too moist. The course cut is actually quite generous in its sizing of pieces, they are not all huge but there is a decent amount of longer/chunkier pieces of jet black Cavendish in there.

After a short airing time, only an hour and half to diminish the moistness, it's quite simple to light. It takes a medium amount of time to get it lit and once it is ignited it gives a brilliant consistent burn which stays lit well. The flavour of this thick, cool smoke is delightful; surprising because I was expecting it to be a lot stronger with cherry after I had had a smell of the mix but it gives a gentle/mild background cherry note. This can be inhaled really easily, it glides down without fuss and because it is also mild in nicotine my head isn't left spinning! The room-note is definitely cherry Cavendish but be warned, it is fairly heavy so could be irreverent for other people in the room with you. This does leave a light ghost so if I take to it as a more regular smoke then I will probably dedicate an older pipe to it.

The burley is nutty sweet with some earth and wood as the lead component. The Virginia cavendish is a little grassy with a touch of tart and tangy citrus in a back up role, and often not very noticeable. The sugary black cavendish is smooth in a condimental role. The tobaccos are fairly sublimated by the black cherry topping, which has a deep flavor, and holds on to the finish. The strength is a step past the center of mild to medium. The taste is medium. The nic-hit is just past the mild mark. Burns very clean and fairly cool unless you puff fast, which I don't recommend due to potential tongue nip. Has a very consistent sweet flavor. It needs a little dry time and will leave moisture in the bowl. Requires a few relights, but not that many. Has a short lived, pleasant after taste, and a lasting room note.

Having enjoyed their Cherry & Vanilla blend, I decided to give this Black Cherry version awhirl. It opened to a satisfying and initially powerful sour cherry punch (while losing some impact weeks later, it still had an inviting scent).

The mostly Black Cavendish cut was springy and responsive, packed and lit well. Once smoldering, the Cherry came across brightly (like a sweet cordial) and never once tasted fake nor overly topped. While not as sugary as the Vanilla Cherry version (which feels more like a Vanilla Coke), this one worked on it's own merits by being more tart.

Here is proof, a great Cherry Aromatic can both hold a strong flavor without needing to be a syrupy mess.

Really enjoyed this. Cherry smell is very strong reminds me of cherry sweets however it's fairly mild cherry taste when smoking.

There is enough cherry in there to taste but not enough to mask the tobacco which is great.

Smoked this from a few different pipes which did make a huge difference to how hot it burned.

Managed to get the right pipe for this and will re order for sure.

Remarkably delicious sweet cherry tin aroma (I couldn’t stop opening the jar just to smell this even when I wasn’t planning on smoking it) and very pleasant room note. However, this is a very sticky tobacco which was far too damp. But strangely it packed and lit very well producing a (far too) mild sweet Cavendish, fruity, steamy smoke. Due to the moisture the smoke felt hot but bite was never a concern. Did I mention the delicious room note?... Thought I would try this a little drier and so left the lid off for a day. This had virtually no effect. Left it for another few days and eventually it started to lose some moisture. Then forgot about it for another few days… So after drying for almost a full week it was indeed bone dry and had unfortunately lost much of the cherry tin aroma but it smoked almost exactly the same, just a little faster and a little less steamy. Can’t kill this stuff!

Age When Smoked: Fresh from the tobacconist

Similar Blends: Surprisingly not similar to most other GH blends.