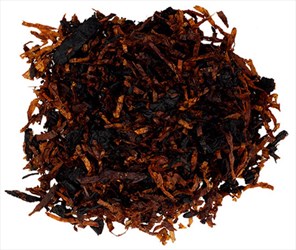 As this is Barbados Plantation in bulk, I’m repeating my review of that here. The rum and vanilla toppings are the predominate tastes of this blend. The grassy Virginia is there as a base, but you really can't taste it. I get a few burley nut notes here and there in the background. The unsweetened black cavendish adds a little sugar. The rum is has a little richness, and is a little more obvious than the vanilla. Has little nicotine. Wont bite or get harsh. Burns very cool and smooth, and slightly slow as the tobacco is a little moist. Needs some relights. Has a very consistent flavor, though it does require a little drying fresh out of the tin to avoid a wet bottom of the bowl, and also make it easier to keep lit. Don't dry it out completely though or you'll risk losing some flavor. Sports a very pleasant after taste and room note. Can be an all day smoke. Three and a half stars.

It was too moist on arrival, not wet, but in need of an airing before being piped Just like it's tinned twin! The blend appears 50/50 black and brown, and is slightly coarse.

The leading taste of the smoke is a sweet, vanilla one: molasses from the rum, and an added vanilla flavour: heavier than that which would emanate from Black Cavendish alone. The Burley adds a coarseness which takes the edge off any sticky feeling which could arrive without it. The Virginia's the lesser of the three leaves, giving more of a condiment type flavour. Mine burns cool, even, without a bite at all.

Like it's counterpart Barbados Plantation this deserves four stars:

The perfect rum blend. The predominant taste is the rum with a little vanilla for sweetening. Pouch note is amazing and is consistent with the room note. Came a little moist, but still provided a pleasant smoking experience although I will let it dry out a little. An all day smoke that is consistent to the bottom of the bowl. I cannot think of one negative thing to say about this tobacco!

I'm a fan of Barbados Plantation so I thought it would be good to try Queen Anne's which I had heard is just a bulk of the same blend.

It is definitely an aromatic.

Taste: Sweet with a Molasses taste. Not a strong rum flavor to me but enough to be noticed. I get the vanilla also but subtle there.

Smoke: Like any aro it can get moist and hot. Was easy to keep lit. Sipped it keeps cool and didn't bite the tongue. Wife says the room note is "Toasted Marshmallows"

Verdict: Yep.. it tastes like Barbados Plantation. Not 100% sure its exact but it is close enough to save some money and just buy the bulk

Age When Smoked: fresh to one year

With a name like Queen Anne's Revenge one would think of rum, maybe a rum and raisin pirate adventure, but this Jolly Roger flag did not fly. This is one of those tobaccos that I didn't bother finishing off the bowl. No tasty flavors, no Caribbean or Carolina adventures, just nondescript generic tobacco. After some thought blurted to my Dad who was smoking with me that it reminded me of cigarettes and he heartily concurred. We emptied our pipes into the potted bougainvilleas next to us and began to try other tobaccos. Recommended for those who crave a cigarette in a pipe, all other pirates seek your bounty elsewhere.

First, I am not a major aromatic smoker; at least now a days. Like most pipers who have been at this passion for an extended period of years, somehow the path always leads one to more luxurious and heavier blends such English, Burleys and Virginias. Although I found my piping legs on a literal spew of different aromatic blends, my palate has since matured to preferring blends offering true native tobacco flavoring; less the sugary/artificial toppings. Having stopped at one of our local wall of beer stores that happens to also sell cigars and a limited supply of pipe tobaccos, I noticed a canister of this particular Sutliff mix sitting adjacent to the Match 20 English blend that I was originally after. Reading the name printed on the canister, Queen Anne’s Revenge, set my internal cat on a path of curiosity.

Not knowing what this particular blend was, I proceeded to lift the jar lid just to get a hint of what the substance was inside. By appearance I spied a course mound of tobacco of the mostly dark brown and black in complexion; Burley-Virginia-Cavendish. As with most aromatics I could easily discern the excessive moistness brought on by whatever the applied toppings were in the recipe. Note this particular mixture requires extended drying time for optimized burning.

Bringing the canister to my nose I experienced a wonderfully enticing aroma to say the least. Judging from the blend’s rich sweet vanilla-rum perfume, I instantly registered that I was holding on to a quality aromatic. It was too provoking to ignore, so I thought what the heck and purchased an ounce to try.

Overall, Queen Anne’s Revenge flavor is a rich, pleasant fusion of sweet vanilla notes and a spray of zesty rum. Generally with aromatics I often find that the lovely pouch note rarely transfers through to the taste; not so with this one. The flavor is true and highly enjoyable. Underneath, I could just sense light traces of the woody Burley but not so much of the Virginia however. There is some added sweetness brought on by the complement of the Black Cavendish nonetheless. I’ve had several other rum topped mixtures and this one definitely stands out as one of the best that I have smoked to date. A very enjoyable experience in general.

The smoke produced is rather full and plumey with a room note that is extremely fragrant and inviting. A great all day smoker or dessert type blend. Nic hit is pretty much nothing. No bite or tongue lashing with this one. Just a very nice little tasty aromatic that I would recommend you give a try.

I bought it on a whim and discovered that there may be more to be said about instinct than one may realize.

Purchased From: The Market Place

Very moist, but burns well and cool. Delicious and smooth. As aromatic as they come. Scratches my rum itch. Yummy stuff. No bite. One of the few that tastes as good smoked as it smells in the pouch.

Pouch aroma is very pleasant. Rich rum and fruit notes permeate the bag. I noticed a slight coconut aroma on my fingers after packing as well. Speaking of fingers, this leaves an oily and sticky feeling on the fingers after packing. Seems there is a lot of humectants in this.

This crackles when lit. There is a lot of moisture here, so the burn qualities suffer slightly. I'm sure some dry time would alleviate this.

Too much flavoring additive. No matter how much I tried to dry out the tobacco, I couldn't get it to lite evenly nor burn consistently in the pipe.