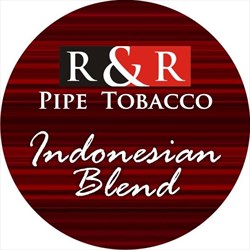 Notes: Various types of tobacco produced in Indonesia, such as Virginia tobacco (or Flue-cured), Burley, Sliced​​, tobacco is dried in the sun, and tobacco for cigars. However, there are several factors that make a typical Indonesian tobacco types in Indonesia is hard grouped into Virginia, Burley, and Oriental. Each tobacco-producing areas in Indonesia usually produces a distinctive tobacco leaves, caused by local conditions and culture. Therefore, usually named after the tobacco growing region of origin, such as Temanggung, Garut, Boyolali and so on. This Indonesian Blend is made to represent each best tobaccos that growth at Indonesia.

First i smoke this tobacco is over a year ago and i dont like it much, too much cigar taste, bitter, sour, and less sweet and this year the RnR had change the formula and it with some good reviews from friends made me to try it again.

It package comes in 3oz box and flip pouch, the box notes are good, nice smell of mature Javan tobacco and little bit cigar notes. The new formula is contains Temanggung tobacco, Madura tobacco, Weleri tobacco, and Deli tobacco. Its explain why there is cigar scents on this blend because it is using Deli tobacco that had widely known used as cigar binder and wrapper at some of world's best cigar since the old times.

The cut is on mixture cut, so it not difficult to pack on my pipe. Humidity level is quite good so i had no problem to light it up and burn so nice at my pipe. There is no overwhalming taste and the distinc taste and flavors are almost similar with virginia, burley, and oriental mixed into one blend follows with cigar's taste, so i must said if this blend is a quite well balanced blend. it's a medium strength so it give me a smoother smokes and not too much kick from the nicotine.

I must tell this is a nice blend, smooth and mellow but not make me get boring to smoke it. If you want to try a traditional tobacco that more smoother then tambolaka but without loose the unique flavor of the exotic traditional tobacco, definitely i highly recommend this blend.