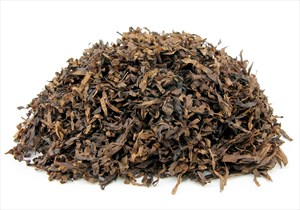 Burley-like leaves are fire-cured with aromatic wood to add a distinctly smoky note. This is a strong and spicy leaf, and should be used sparingly to keep it from overpowering a blend. Can also be smoked straight.

This dark fired Kentucky tobacco offers a fair amount of spice, wood, a little smokiness and nuts, some earth, and very little sweetness. Doesn’t quite have the richness expected. The nic-hit is mild to medium. Won’t bite or get harsh, but does sport a rough edge or two, and can burn warm smoked straight. Don’t use a big bowl. The tobacco is dry, and you may consider a light hydration. Burns clean at a fair pace with a one dimensional, consistent flavor. Barely leaves a trace of dampness in the bowl, and needs few relights. Has a pleasantly lingering after taste. Not an all day smoke on its own. Made to be a mixer, it can have quite an effect on whatever you blend with it.

Mahogany colored thin ribbons with a bag aroma of spicy mustiness. I picked up some of this to use in some blending experiments but smoked 5 bowls straight as well. While doing so, I had to remind myself that this is primarily for blending. It had a nice spicy flavor, but it was on the thin side. Comparisons to Old Dark Fired or Cumberland are pretty unfair, so I tried to be objective. As a straight smoke, I could see this working for someone that wanted the bold flavor of dark fired Kentucky but wanted to tone down the richness and nicotine. This would work that way, for sure.

As a blender, this one showed more strengths. Mixed with various Virginias, perique and orientals, the weaknesses of it as a straight smoke were minimized and the spice that it lends maximized the potential of anything I blended ( not that I'm really much good as a blender). As noted, a little goes a long way and it will easily overcome less flavorful components if not mixed conservatively. It may not be the most inspired dark fired blend out there, but it doesn't embarrass itself. A nice addition to a blending table.

The ribbons are a dark brown and narrow.. The pouch note was slightly smokey. The tobacco was delivered on the dry end of smokable, and I smoked it without rehydration. You get a lot of tobacco for the buck when you are not paying for water.

This was a pleasant smoke. It is a little spicy and barely earthy. It is not so strong or peppery as I expected. It was a pleasant smoke, and the flavors were consistent. The strength and taste picked up as I smoked a bowl.It is reminiscent of ODF but #314 is thinner and more monochromatic in taste. It lacks richness or complexity, but it is intended as a blending tobacco, so those faults are easy to forgive.

I found this to be a good smoke, and I will experiment with using it to beef up some mild blends. If you like DFK, this is easy to recommend. Don't expect it to be something it is not.

Edit 5/2/18: I have hydrated this, and a little more moisture gives it more flavor. I find that mixed 50/50 with Winchester makes a very nice smoke. It brings out a slight tart from the Winchester, and the level of spice is good for me in a "all-day" sort of smoke.

I'm afraid this isn't going to get much of a recommendation, from me. The main reason being the condition of the leaf when it arrives, it's so dry it's crispy. If it weren't for that the rating would be higher.

The ribbons are just above medium in size, and dark brown. The nose from the pouch is suggestive of a blend not to be taken lightly. Because of the moisture, or lack of, lighting is too easy!

I'm not a fan of the room note and I find the nicotine above medium.

#314: I think as a blender the moistness wouldn't cause an issue, but as a smoke on its own it does. Ergo, two stars seems fair:

I ordered 2 ounces of Dark Fired along with 2 ounces of another tobacco, and the Dark Fired arrived in a much larger bag- because its very fluffy. In that, it's a little like perique, and also in color. It even has the texture of perique, but is not nearly as dense. The aroma is not dissimilar either; barn-like, but a different barn maybe. Unlike perique, it is quite smoke-able on its own. I'd say though that for most this is going to be a condiment tobacco, and I did buy it to blend and experiment with. I know that a blender of some varied experience will do a better job with this than myself, but why should I let that stop me? I've got virginia, black cavendish, perique and some other things on hand. It already works in a fresh iteration of my usual blend, and I'm happy enough with that. I have yet to determine how often I'll smoke this on its own. I find the room note a little like wood smoke. Recently, I re-tried Newminster Superior Slices after letting it age for a couple years or more. I didn't find that anymore inviting than I did initially, and that's got dark-fired in it as a main component. So the outlook for smoking this solo is dim. Don't hesitate though to buy this for blending- like me, I'm sure you will find use for it one way or another. I find myself largely in agreement with DK's review otherwise.

I decided to try PS Dark Fired after smoking MM Country Gentleman and liked the flavor it added to the blend. I wasn't surprised to see that 2oz was almost the same size as 4 oz of another tobacco thanks to Houndtooth's review.

I like to smoke this by itself, but like DK I bought it for blending. I have just started to delve into Kentucky tobaccos, trying Orlik Dark Strong Kentucky as well. It's smokiness is what drew me to it, I wanted to blend it with a Va/Per to make something similar to MM's CG. It's fairly dry out of the bag & the smoky aroma reminds me of burning leaves, but the taste is just filled with smoky tobacco flavor. It is pretty one dimensional, but it's simplicity works for me. It can be a little harsh unless you take it slow & too big of a bowl can be a bit much to handle for some.

I like it on it's own & it's great as a mixer, but what others have said is true, it must be used sparingly as it will overpower lighter flavors. It works well as a condiment in a couple blends I've tried so far. You can add some nice smoky flavor & a bit more nicotine to lighter blends. It tends to bring out the flavors of other tobaccos it's mixed with by just adding a small amount.

Age When Smoked: fresh to a month in the jar

Smoking as I type. Smokey, spicy, pretty mono, but not bad. I blend some but haven't this one. I really see it as a medium all day smoke. Have it in a small briar. Four or five lights. Wife says it has a light chocolate room note and would be an insider for her, big plus. Burns a little fast , but nothing near Five Brothers. Pretty low nic. Maybe Irish Fakes little brother.

Age When Smoked: Not sure, came pretty dry

Purchased From: Pipes and Cigar