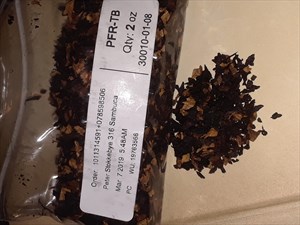 Quality black Cavendish and light Virginia leaf are combined in a rough cut here, then given a strong dose of Sambuca liquor.

I was pleasantly surprised with a sample of this delicious blend. Ever since i was a kid i've always loved black licorice. Well this blend is full of it. Nice and mild with no bite, with a full taste of anisette which stays on the palate after you finish puffing. Wife friendly! I had just enough 1792 flake to make a tall meerschaum bowlful and i kept capping it off with some of this sambuca every time i did an ash dump and it really did a nice job of flavoring the already delicious flake .Next up was straight up bowl of the sambuca in my falcon. Very satisfying .

If you are one of those people who picks out all the black jellybeans out of the mix, you will love this blend. Quality tobacco with a flavorful topping. Like all of Peter Stokkebye tobaccos I have smoked it is great quality at a great price point. I guess that is why his line has been sold as house tobacco at som many shops for a great number of years. Pack well in the pipe and smokes cool and flavorful. It says Anise and that ain't no lie! One thing though you may want to dedicate a cob to this one cause it will leave you with the ghost of jelly beans past.

The grassy, citrusy Virginia and the sugary black cavendish are fairly sublimated by the Samba topping, which has a pleasing licorice taste, though a slightly alcohol feel to it. You will notice the tobaccos just a little more in the last third of the experience. The taste level starts out in the center of mild to medium, but weakens a mite after the half way point, and settles down to just being past the mild mark. The nic-hit is very mild. Won’t bite or get harsh. Burns cool at a reasonable pace. Leaves little moisture in the bowl, and requires an average number of relights. Has a pleasant, slightly lingering after taste. Can be an all day smoke. Two and a half stars due to the distracting alcohol note.

For all those who have ever tasted sambuca then your expectation on this blend may be fully fulfilled, or not at all. It has the licorice flavour expected and the subtle alcohol spirit retrohale as in the original drink but it lacks potency and durability through the whole smoke. Also it has the tendency to bite like a rabid dog very easily.

As you may know, original sambuca drink is high in sugars, then it may be expected that if you soak tobacco in it, it will persist as rekindle factor for that same reason.

Now, flavour is right from the first puff and onwards, but somewhere amidst the half of the pipe it will tend to vanish and persist only vaguely, even unidentifiable amidst a curtain of very biting virginias that cannot be controlled at all by the cavendish and this is the principal downfall from this blend.

Obviously we have in here a scandinavian type aromatic, more likely tobaccoish than just flavours, so don´t expect any McClellands type aromatic in here, it is way more soft than that and you will be very dissapointed if you expect aroma over tobacco. But on the other hand if you want (as i do) that the flavour persist wether in strenght or in subtle intermitence, you won´t find that here either , the sambuca flavour tends to vanish like a ghost and there will be no further reward other than easily rekindled virginias. Only a good charcoal filter will save your tongue from been fried mercilessly.

Now if you want a brief moment of licorice ecstasy, perhaps you will find that in here, 15 minutes guaranted, until you hit half of your pipe, as for the rest it will be a rather conventional virginia-cavendish smoke with a view, rather insipid and hot.

To each its own.

Before even opening the bag, I can tell you this stuff smells Exactly like a cordial of Sambuca. Refreshingly, there were no other rogue flavors in our midst (vanilla, cherry, rum, etc.), just the pure essence of black licorice.

The moderately dry cut was quite course and had a rough feel that made packing a tad precarious. The mix was about 2/3 Cavendish and 1/3 Virginia, and took a moment to get rolling, though once those embers glowed, I was met with a nice warmth that oddly enough reminded me of the afterglow from a sip of bourbon. The Sambuca taste maintained to the end and eventually mingled with some tongue tingling spicy bits.

The girlfriend told me the room smelled of sweet cotton candy that gave way to a carmel creation that was, "super yummy", so this was a double win, since I enjoyed myself as well and can safely award this a solid 3 star Aromatic seal.

If you’re in the mood for a classic licorice flavor this is the ticket plain and simple. Tobacco quality is OK but, that is not what I picked this blend up for. It was for the licorice and it delivers. For me the flavor lasts from top to bottom. Smoke it a slower pace to fully enjoy. No bite. A good once and a while smoke.

As soon as I received my latest order from Pipes & Cigars and opened the box, I could smell the PS Sambuca tobacco. So, being someone who loves licorice, I couldn't wait to try it.

Well, having now smoked about half a dozen bowls in different pipes, I must say I am rather disappointed. PS Sambuca does have a licorice flavor when lit but the taste is not nearly as intense as the aroma and, once the pipe is lit, dissipates rather quickly. What one is left with is a rather mild tasting tobacco that reminds me a lot of Captain Black White, which I used to smoke on occasion 15-20 years ago.

Oh well, PS Sambuca is so inexpensive that I don't regret my purchase and I'm sure I will eventually use up the half a pound that I bought, but I'll keep looking for a tobacco that satisfies my licorice craving.

UPDATE: I can't explain it but, the more I smoke this tobacco, the more I like it. I've found that smoking in a really large bowl pipe seems to accentuate the licorice flavor which, for me, is a big plus. Based on this, I've upped my rating from two to three stars.

Good smoke, nice flavor - the licorice really comes out. Nice tobacco blend, burns well. BUT - the room note was not a wife pleaser. Sorry, I won't be smoking this one again!