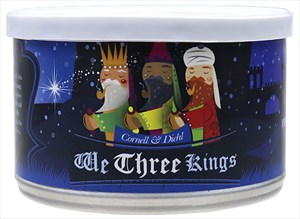 Inspired by the Christmas carol penned in 1857, the first Christmas carol written in the US to achieve widespread popularity, "We Three Kings" is C&D's 2014 Yuletide tobacco offering and alludes to the magi who traveled to the nativity bearing exotic spices and treasures. One part black Cavendish is met with equal measures of the "Three Kings" of red Virginia, bright Virginia, and Katerini Turkish, transforming this blend into true holiday magic with flavors of allspice, cinnamon, and vanilla.

Now, I am not typically an Aromatic smoker, so when an "Aromatic" blend crosses over into the realm of a "Virginia", I have to take note. If there was a category between the two, We the Kings would fall there. To my tastes the bright and red VA does a good job of keeping things interesting in terms of body and strength while the Katirini definitely adds a certain intrigue not typically found in your everyday Aromatic blends. As far as the spice, it does remind me of that certain time of the year (although it would be great year-round) while adding to the modest, yet very appealing aroma. This one certainly surprised me!

The tangy, dark fruity, earthy red Virginia is a little more noticeable than the grass and citrus from the bright Va. The black cavendish offers some brown sugar. The woody, lightly sweet and more sour, earthy, herbal, floral Katerini is an important supporting player, and seems to stand out a little more than the other varietals mostly because the toppings sublimate it less. The vanilla plays second fiddle to the all spice and cinnamon. I also sense a touch of clove, though I suspect that comes from the chemistry created by the various ingredients. The strength is in the center of mild to medium, while the taste level is medium. The nic-hit is just past the mild threshold. Won’t bite or get harsh. Burns cool, clean and slightly slow with a very consistent flavor that will fill your senses. Leaves little moisture in the bowl, and requires a few relights. Has a pleasant, lingering after taste and room note. Not an all day smoke, but it is repeatable. Two and a half stars.

Tin Note: Mixture of black, brown, and gold leaf with a few stems. Smells pretty much like the tin says: allspice and vanilla, except I don't detect a cinnamon scent. To my nose the vanilla is up front and I also pick up a hint of raisins.

Charring Light: I packed my smallish, smooth Nording Queen using the air pocket method. First light yielded a few different flavors: definitely vanilla up front, and now the cinnamon that I didn't notice in the tin comes through along with a slight note of tea leaves. The leaf lit well with not a lot of smoke, rose well above the rim, and stayed lit nicely on the first tamp.

The first third of the bowl started a little harsh, probably because I pushed too hard to see what I could coax from it. Definitely have to treat this with care or it'll bite. I finally found the sweet spot in my cadence with very light tamping. At this point the Cavendish is forward to my palate with it's mild vanilla sweetness. I'm not a big fan of the aftertaste; it reminds me of cheap, hard candy for some reason.

Near mid-bowl the Cavendish begins to take a back seat as the Virginias and Turkish assert themselves. The sweetness shifts to a grassy/hay variety and the spicy cinnamon flavor weaves in and out. It has an almost peppery quality to it like an atomic fireball but not nearly as strong; more like Big Red chewing gum but not as sweet. The retrohale is fairly pleasant and the aftertaste has improved quite a bit.

The last third of the bowl is pretty much the same except the vanilla has somewhat made it's way back into the picture. The ash is predominately gray with flecks of white, and the burn was consistent throughout. Can't comment on the room note since I'm an outdoor smoker.

Overall this is good pipeweed and very fitting for the season; the cinnamon spiciness does remind me of Christmas. It's not in my wheelhouse so I doubt I would smoke it on a regular basis but it's a very nice change of pace. I'm curious to discover if my opinion changes as the weather gets colder.

A small amount of the mix is on the cusp of being a broken flake. It's prominently ribbons but some of the blend is coarser/quite rugged. The black Cavendish is the lesser of the three, about 20%. The smell from it exemplifies the spices more so than the vanilla. Like Golden Days of Yore which I reviewed a few days back the moisture's perfect, but unlike Golden Days' I'm not a fan.

The black Cavendish proffers the least flavour, the Virginia and Katerini are running the show. Being fair, the initial flavour's better than the subsequent part. I can taste a lot more vanilla for the first quarter, but this becomes overpowered by the cinnamon and sharp/floral Virginia and Katerini flavours. The over all taste is quite sharp and bitter. It burns good enough, causing no tongue bite, and is relatively cool.

Nicotine: mild to medium. Room-note: not a fan.

We Three Kings? I don't like it and won't rate it with any more than one star:

Although sold as a holiday blend I believe that this tobacco could be smoked just about any time. The tin note reminded me of vanilla, nutmeg, rum, and spice and was very pleasant. Before lighting there was a sweet and spicy like taste in the pipe when drawn which hints at what is to come. The tobacco was easy to load and pack and took the initial light well, staying lit through the majority of the smoke, although I did have to relight midway through the bowl, but this is meant to be smoked slowly in order to avoid any bite. The taste was mild and slightly sweet with a hint of vanilla and a touch of spiciness on the initial charring, but progressed into a more spiced, almost ginger like note by mid-bowl. Towards the end of the smoke there was an almost fresh baked bread taste that was detectable with just a hint of the sweetness coming through. The room note according to the wife was warm and pleasant. All in all, a good smoke any day of the week

C&D's We Three Kings, 2014 Christmas Blend is truly a treasure fit for a king of Orient or any other king. It's easily one of the nicest aromatics I've smoked, and definitely one of my favorites that I'm sure to keep at hand.

Not overly sweet - no heavy casing like many cheaper aros - this one is gentle and tasty, with the Virginias and Turkish components blending very nicely with the cinimony, nutmegy, light spicy, vanilla flavors of the dark Cavendish, without being overpowering. Not at all moist or goopy like typical cheaper aromatics, this burns nicely, like a high quality blend.

Other favorable reviews here describe very well the experience of this marvelous blend, with not much more I can add. A pleasure to smoke, especially during cold winter months here in Toronto Ontario. It really does epitomize the smells and essence of the Christmas holidays and spirit! Cheers!

You can imagine the tin note was indeed lovely, and the scent of the components was detected easily enough, I think. The cut is mainly a fine ribbon cut of the virginias, with chunks of black cavendish and perhaps some of the Katerini turkish being a bit chunky as well. The tobacco is not overly moist, and in fact seems to be just about perfect for smoking right out of the tin. I let mine sit out a few minutes regardless.

Char light was lovely, with flavors of vanilla and a hint of cinnamon greeting my tongue and my nose. Tobacco flavors were there, not washed out by the aromatic flavoring. But then after tamping down the char light, all flavor became very mild, but began to pick up quite well again after a few short minutes. About late mid-bowl I began detecting a scent and taste that were quite fruity... the allspice perhaps? Regardless of what it was, it was quite enjoyable. I detected absolutely no tongue bite. Nicotine was there enough just to say, "Hello." And the tobacco burned very nicely, with three relights. One relight because I set the pipe down for a couple minutes.

All in all, I found Cornell & Diehl's We Three Kings a very enjoyable smoke. And one that I think will be enjoyed much more with cooler weather. I'll definitely be ordering a few more tins of this for the holidays. Lovely stuff. :puffy:

A few years of age really enhance this tobacco, which I do not usually find to be the case with aromatic blends. The katerini melds with the allspice and cinnamon—offering flavors reminiscent of a mild clove cigarettes without the harsh clove flavor. The black cavendish and vanilla casing add a creamy sweet flavor to the smoke. The smoke is quite mild but a good smoke. If you can find one of the few tins out there in the wild, grab it—you won’t be disappointed.

Age When Smoked: A few years

The C&D Christmas blends have been hit and miss for me and this is unfortunately a miss. Upon opening the tin you smell various baking spices and what I would swear is a base of GL Pease’s Vanilla Cream, if it’s not, it real close. The first few puffs are pleasant enough and the room note was very nice I was told. After about 1/3 of the bowl it just turns flat, then ”cigarettey”. I was hoping for a fragrant blend to smoke during the cold nights ahead, but this was very disappointing.

Love this blend. The allspice and vanilla come through on the char light and through the entire bowl. A lovely and enjoyable smoke. I believe I bought the last 8oz tin online this year that was remaining. The moisture content is perfect and have no trouble keeping it lit even fresh from the tin.

Age When Smoked: New and smoked again with 4 years of age on it.

Very interesting aromatic/Va blend, the two aspects interplay with each other very nicely, the christmas spices of nutmeg and a hint of cinnamon/clove play very well with the virginias in this blend, it overall a very nice smoke with a pleasant room note!

What a disappointment! I expected better from Cornell & Diehl. Not the slightest hint of vanilla, cinnamon or allspice. The Virginia and Katarini overpower everything...including the Cavendish. I've tried two bowls and I'm not sure if I will throw it away or try to blend it with something. Sad, just sad.

Wow, what a disappointing blend this is. About the only thing that stands out to me about this blend is the Turkish tobac in here. This is a very bland blend, not delivering on it's "holiday magic with flavors of allspice, cinnamon and vanilla" at all. Skip it.