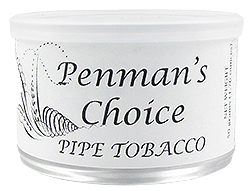 Pipe smoker and Master Penman Michael Sull explains it this way: "When I smoke this blend it's like listening to Perry Como...really nice, no harsh tones. There's a pleasant taste and a pleasing aroma evocative of a past time when grandfather's pipe smoke wafted through the air. There is a certain devotion to past traditions in my work and in my pipe smoking. Both the art of smoking and the art of penmanship require contemplation and a quiet resolve."

IF you enjoy Nording Labrador you will love this. To me it's very similar blend with the vanilla and caramel flavors kicked up a notch. It's like a vanilla custard. Produces a nice thick smoke, isn't too goopy in the bowl and has a great taste and room note.

I got to try an early sample of this in Kansas City during the pipe show before it was released and thoroughly enjoyed it. So much so that when it came out, I picked up a couple more tins.

The black cavendish offers some vanilla in a supporting role in the same way the gold cavendish adds a touch of bread and honey. The burleys are barely present, though they may add some toasted nut flavor. The filbert and hazelnut toppings are the main stars, though they are more sugar sweet than nut-like, and fairly syrupy with a sour note. The sourness is not really present at the first, but seems to gain strength in the last third of the bowl, and can be lightly bitter no matter how fast or slow one smokes. Has very little nicotine. Burns well and cool, and won't bite though it will leave some moisture in the bowl. Needs few relights. Not really an all day smoke. The syrupy sweetness lingers with aforementioned sour note in the after taste. How one would rate this will depend on one's fondness for the topping during and after the smoke.

I tried a 10g sample of this along with a full tin of Master Penman. I found the two very similar, so much that I can't really distinguish the two in memory. See my review of Master Penman, because everything I said about it, can be applied to this.

As a McClelland blend, I already know I'm in for a treat, so the next thing to do is to compare this to Master Penman (the other hazelnut/nut blend). Upon opening the tin I was greeted with a sweet amaretto, syrupy smell. It was a bit more artificial and the nod so far is going the Master of Penmans.

The cut was very thin and spongy and not as sticky from the topping as the initial whiff had me to guess. It burned well and the first puff was a bit disappointing. Nothing nutty here (which what I had hoped for since it was billed as hazelnut), rather a liqueur taste I didn't hate, but wouldn't seek out again. The thick smoke it belched out oscillated from sweet to flat. It was during these flat moments one 'could' imagine some nutty element.

For my money, I would stick with Master Penman or Nording's Labrador.