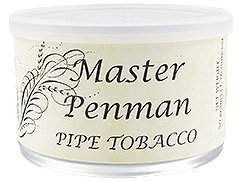 With this mellow aromatic blend we honor Master Penman Michael Sull whose incredibly beautiful Spencerian penmanship is internationally recognized and can be seen on many pipe club presentations. His preference for soft, fragrant blends is the inspiration for this elegant pecan-flavored pipe tobacco. We hope it will enable you, in Mike's words, "to achieve the highest degree of pleasure and blow the perfect smoke ring."

The pecan topping is sweetly nutty as you would expect, and though it's the main flavor, it does not overwhelm the other toppings. The cinnamon adds a nice, mild spice note that contrasts well with the light vanilla hit. The black cavendish has the vanilla notes you expect, but in a small amount. The nuts from the burley is barely noticeable, and I suspect the light honey comes from gold cavendish, though I wonder if there's some Virginia present because I get a hint of grass in the smoke. Has little nicotine. Won't bite or get harsh. Burns a little slow and requires a few relights, and will leave some moisture in the bottom of the bowl, but not really any dottle. The flavor is consistent all the way to the end, but at times, I get a syrupiness that hints of a chemical. It really isn't distracting, but I have noticed it. An all day smoke with a pleasant after taste and room note. Three and a half stars, but not quite four.

It's probably important to note that I've only been smoking "seriously" for 6'ish months. Thus far, so you see where I'm coming from, my favorite tobacco had been Escudo. That said... I opened the tin and wasn't very excited. I'm not sure why but it didn't appeal so I put it aside with the other dozen open tins which I wasn't excited about. After a couple weeks I returned and decided to give it a shot. The scent didn't excite me, but upon lighting a full packed bowl and lighting it, the smoke hit my nose and it was love at first scent. It reminded me of the burnt sugar on top of creme brûlée. The taste, to me, was pure Carmel and bread pudding. It burned perfectly, no relighting needed. It's a mild aromatic and not like poupurri like taste of others I've tried. It's really good tobacco with a really great taste To say I loved it is putting it mildly. The fact I've bothered to write my first review says something. Also, the fact I've smoked through two tins in four days says something. I've ordered a dozen more to try aging some. This is BY FAR my favorite aromatic. It's new so I've not read much about it but I'm very curious as to whether it's just me.

Age When Smoked: Straight from Tin

Purchased From: The Briary in Birmingham, AL

I love this blend. It's a new favourite. Smells like a delicious dessert when you open the tin. Like a fruitcake or something that I'd actually want to eat.

Smokes down to the bottom of the bowl without relighting, with good taste throughout the smoke. Not too much of a harsh chemical taste.

Room note is very pleasant and easily passes the wife test. Definitely a blend I'll want to keep in rotation, as long as I'm able to find it.

One of my favourite blends. Great after dinner or when you want a sweet smoke. Very mild taste, room note and the pecan, vanilla and cinnamon flavouring is just right. Non-smokers say they like the smell and no complaints when smoking outside. Give this one a go if you like aromatics.

Not super impressed with this one as a first impression. EVERYTHING about this blend screams out to my tastes. The Tin Note was just as advertised- Delicious. Packed a bowl and got ready to go. Warning on this one- if you pack the bowl too tight, this blend will allow you to- so be careful loading. Upon first light, I was..... shall we say- underwhelmed. Pretty flat in flavor with a super-light hint of the additions. Every once in a while as you travel through the bowl- you get a good burst, but mostly, just flat. Upside- no bite at all. I may have to come back to this one after I let it sit for a bit.

Age When Smoked: Fresh From the Tin

I recently smoked Nording's Labrador and while the hazelnut taste didn't come through in the smoke, it was THE BEST smelling aromatic I ever had the pleasure to open. The quest for another hazelnut blend has landed me here, to duke it out for title of top dog.

Opening the tin had a very pleasant sweet hazelnut aroma I would of been thrilled with, had I not been spoiled by Labrador. Master Penman had a hint of fruit in there as well, making the smell a bit more artificial. Packing the pipe was odd, the ribbon was cut very thin and the leaves felt like some soft packing material.

Lit wonderfully and was noticeably sweeter. That signature McClelland taste I've noticed in their other blends was also there (that almost brown sugar taste that sits on your tongue after you're done). The smoke was lighter and I have to say had more hazelnut coming through!

This is where I am torn. On the one hand Master Penman was milder and tasted better than Labrador, but did not smell as amazing in the tin. Can I just recommend both?