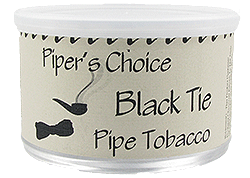 A crossover tobacco for the individual looking for a rich, satisfying blend. Pleasing to both the nose and the palate. A mixture of rich red Virginia with bright, sweet Carolinas, stoved until black and the finest Louisiana perique. It's then seasoned with black cavendish to soften the blend. Each bowl is an elegant tropical evening's adventure to be savored with friends.

Black Tie took me a little while to get my arms around as to whether or not I enjoyed it. The usual high quality matured Virginia’s that come from McClelland make up the tang component in this blend. The Cavendish offers up the typical sweetness found with common black Cavendish. The Perique offers at one moment plum and fig and at another pepper (but not spicy). I found it to be pepper more often though. Conceptually, Black Tie is an interesting blend. But in the pipe it has two main issues for me. The first issue is that there is too much Cavendish to appeal to the VaPer lover in me. I enjoy a good aromatic and I really love a good Vaper. But this simply didn’t work. The second issue I have is with the Cavendish itself. There is a chemical taste to it that I find unappealing. If Black Tie had just enough Cavendish to offer up an underlying sweetness rather than the amount that’s in there, I think this blend could have worked. (Something akin to Hearth & Home’s “AJ’s VaPer” as an example) Also, a better quality Cavendish is needed too. In the end, I really didn’t enjoy this blend. Aromatic lovers may find a home here, but for a Virginia, Perique and Cavendish blend, I find AJ’s much better.

Only 2 reviews yet for a tobbacco which might change the world ? Huh ? What a miss ! Last year, shortly after its release, I bought a tin, mainly as of couriosity...and the "usual warm feeling" I usually get from tinned tobaccos out of Mc Clelland's stall... Frankly, the "tin art" was not necessarily part of the acquisition selction criteria... ooops... Last week I opened the tin, at last... Wow ! Smells like Mc Clelland, and "something else" with a "little bit of something extra"...

Impressive ! After many bowls now, and to cut a long story short, so far I almost never came across a tobacco which would trouble me providing a plausible review... VaPer, of course, McCl Vaper ! ...of course, and this Cavendish... and maybe this "something extra" ?... who knows... Simply overwhelming ! "Creamy, balsamic, fruity", with a hint of somehow resin alike ? ...which mango might deliver ? Almost impossible to find a plausible description... or ? Well... I could discover some elements which remind me to McCl's Royal Cajun series tobaccos, 'Special' in particular... OK, whatsoever, obviously I fail telling you that Black Tie is a fabulous tobacco !

"Restrictions": Firstly, hard puffers will miss any of this tobacco's magic. Secondly, DGT doesn't work properly with this tobac, but, who the heck wouldn't want to finish a bowl in one go ? Furthermore, just ignore the somewhat inattractive "tin art", and go to get it !

But, please, do me a favour and leave some tins left for me! Thanks in advance ! As of the inherent limitation to 4 stars, I can l give this wonderful blend 4 stars only!

The sweet Carolinas are indeed citrus sweet, and a little grassy, too. The red Virginia has tangy dark fruit and a touch of earth, but it's not a dominant component. Actually, there isn't one, because this tobacco is blended so that you taste every component in virtually every puff. The black cavendish is sweet with just a hint of vanilla, and some sugar as it smooths out the other ingredients in a complimentary manner. The perique is a back up player: raisiny, figgy, plumy with a rather mild spice. Won't bite or get harsh. Burns clean and cool at a moderate pace with a consistent flavor. Leaves very little moisture in the bowl, and needs an average number of relights. Hardly has any nicotine to speak of, it's an unobtrusive all day blend that's less complex and has less depth than it should, but produces a lot of smoke, and has a very pleasant after taste. Two and half stars, but not quite three.

What a tobacco! I loved the presentation of not only nicely aged Virginia (does McClelland's have any other kind?) but subtle nuances of Perique and all supplied with a Cavendish backbone that makes this one sing! Full of flavor and enough strength to keep me interested. This one certainly is Pipestud's "Piper's Choice).

Dark brown to black choppy ribbon with a tin note of Grandma's spice rack, or perhaps the overall smell of Grandma's kitchen around Christmas time. The typical McClellands Virginia aroma is mostly covered but there is a whisper of it. This came a bit overmoist but was quick to dry.

A crossover blend as the description states, this has a nice flavor backbone of sweetness that is singularly stoved lemon Virginia (or, Carolina, as McClelland refers to it). A gentle breath of perique is added for a hint of spiciness and fruitiness. Stop there and you'd likely have a very nice if typical McClellands light VaPer. But then they add flavored black Cavendish to the mixture to provide additional sweetness and a pleasant room note. As stated, this is designed to please both the smoker and those around him/her. Unfortunately, the aromatic flavor asserts itself as most American-style aros do for me, with a chemical, artificial flavor that I can't place in the realm of the usual fruits or nuts or what have you. I found it quite offputting and I was not able to finish the tin. However, if one smokes a lot of aromatics and is looking for a step into non-aros, this might be a good starting point. I think it does what it's supposed to do and in that it probably deserves an additional star. But two is the most I can muster, as I find the Cavendish a detractor rather than an enhancer. But crossover fans should definitely give this a try.

A full bodied VaPer with the sweetness and tang I enjoyed throughout the smoke with a room note that is pleasant. Great as an all day smoke or as an occasional change of pace treat for when I'm looking for something a bit different. Flavor sustains and builds throughout the smoke.. Smokes well in both large and small bowls.

Age When Smoked: One year

Similar Blends: Nothing like it. Full bodied, natural tobacco taste with a room note pleasing to the 'significant other'..