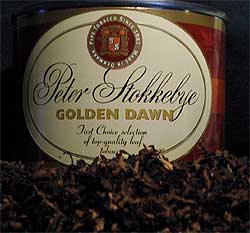 The flue cured Virginia is toned down grassy and citrus sweet. The toasted burleys are a little nutty and earthy with some molasses, and are also toned down. The two black cavendishes offer a dull vanilla and a sugar note. Whatever the topping is (I suspect a mild honey), it adds little to the blend. I don’t recall smoking a blend where every attribute is as muted as this mixture is. Has a mild nic-hit. It might bite if you puff like a freight train, but I did not experience that. The moisture content of the tobacco was decent. Burns slightly fast, a little smooth, and has a gentle, but boring flavor, though it picks up a little after the half way point. Leaves virtually no moisture in the bowl, and easily burns to ash. Needs an average number of relights. The after taste and room note are plain. Might make an okay all day smoke, but there’s not enough here to recommend it, though I’d not say this was a bad blend.

I bought a tin of this stuff, wondering if it was actually anything like what British occultist Aleister Crowley (1875-1947) may have been smoking when he was an influential member of the Hermetic Order of the Golden Dawn. (No doubt Crowley was smoking something, but probably not tobacco.)

Like Crowley, this particular blend is a broken flake. I don't pretend to be an adept at divining the best blend in the world, but this one is not the Ne Plus Ultra. Far from it.

Stokkebye generally markets pretty good tobacco blends. But this isn't one of 'em.

I sampled a bowl of this from my pipe club's tobacco bar at a recent meeting. Upon taking a whiff from the tin, I debated whether to partake of the contents with my pipe or a spoon. After mulling it over, I chose my pipe. Wrong choice.

If wet, hot and gooey sounds good to you, you'll crave this stuff. If, on the other hand, you want to light up something that at least halfway resembles tobacco, leave Golden Dawn alone!

A guy at the local tobacco shop had a tin open and was smoking this enticingly sweet smelling tobacco. I asked him what it tasted like and he said, pretty much like it smells berries. Berries it did taste like and some sweetness from the Virginias too, the Cavendish added a bit of weight to it overall not to bad in the taste department. Now for the big problem TONGUE BITE, I am not a new pipe smoker; I mean bite enough to make my tongue bleed. I don?t care one way or another if you like the way it smells DO NOT TRY THIS TOBACCO, unless you like bleeding tongues and sore gums. I really wanted to like this tobacco it smelled like a good aromatic should, you know the ones that people stop you and ask, wow where do you get that it smell great. I ate ice cream and Popsicles for two days and did not smoke for three after that I am sorry for ever lighting p this stuff.

If you let this stuff dry it is quite good. Nice and mild, with a great room note. Tastes kind of like it smells, which is berries. The berry taste is not too powerful though. Give this stuff a try, pretty good for an (semi) aromatic.

A 100mg tin of this bought recently at the local shop was my initiation to the world of tinned tobacco. Golden Dawn really grew on me, as I smoked it in the same pipe on consecutive evenings. Once the flavor had established itself in the caking of the bowl, I found it very enjoyable. It has a slightly sweet flavor, but certainly nowhere near the sugary flavoring of the bulk "candy" I've been smoking for years. This took some getting used to. Now I'm hooked on exploring the world of tinned tobacco! I'm trying out PS Evening Treasure now. But I'll be back for more Golden Dawn, I'm sure. 12/31/03 Update - The second tin of this stuff bears little resemblance to the first. Now I know what the other negative reviews were referring to. It bites like pit bull. Ouch. And the unique tasty flavor I remember from the first tin is nowhere to be found here. The remainder of the tin may end up in the compost heap. A VERY unreliable blend, it seems.

This is light. As noted in previous reviews, it comes a bit moist. Let it dry a bit and it lessens the bite.

I like the berry flavor. However, there is not enough tobacco taste for me. The blend is also too light for me. I probably cause my own bite by puffing too hard trying to get more flavor.

If I learn to appreciate the lighter blends, I wil be back for this one.

I fell for the alluring aroma and had to have some as it smelled so good. Bad mistake, besides being wet and had the sickening aroma of sweetened berries it also left me with a blistering tongue to where I could barely eat.

I received a healthy sample of this blend once when I bought a pipe at a local pipe shop. It is perhaps the wettest tobacco I have ever seen, even beating Borkum Riff and other drugstore brands of my youth. After a week in the open air, it was still so wet that smoking it was not unlike sucking on a steam cleaner nozzle at the car wash. This stuff will BLISTER your tongue and I'm not kidding. Pass this by unless your masochism is pathological.