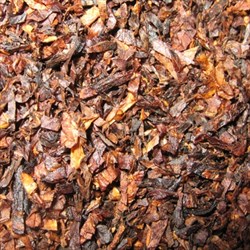 A rich English blend of matured and bright Virginia with the zesty spice of Perique.

I got this blend as a comp item, decent sample size. Because they were out of exhausted rooster. This wasn't listed here, so I included it. If they used it, that's my cob I use for taste testing va/pers in the picture. I just got this opened now, so I'm reviewing it for when/ if it is approved. Loose cut va/per is a something new to me recently.

On the charring light it tastes of dried dark fruits. I want to say it reminds me of raspberries. Sweet, almost like it has to be flavored with something. I charred this one twice before getting settled. Bag moisture isn't dewy, just one of the tobaccos didn't take flame as well as others.

About a third of the way down I start getting peppery notes. Like coarse, fresh ground pepper. Running my tongue around my mouth and teeth I taste sweetness. Almost sugary.

Over the half bowl mark, definitely reminds me of a cross between Prince Albert and haddo's delight. I like them both, it's not an insult to the prince. Little bitterness, it is a good balance however to the somewhat cloying nature of the first third. I'm going to make a guess that's there's some burley in here. Or maybe it's the matured Virginia. Getting some strong nut hints in the last third. Also, just a tiny nic buzz. The nicotine content is noticeable, I wouldn't say strong though.

Burns great in a cob at least. Wee bit moist maybe, no bite though. Stayed light well until the end, with very minimal fiddling. One relight that may be due to writing this while I'm smoking. Very tasty overall. My wife is sitting less than five feet away, and hasn't even given me a look yet. So that's an ok on the room note. It says it is an English blend of matured and bright Virginias, with perique. Not sure this counts as English. I'm not detecting anything distinctly English about it. This may be a crossover blend or some such.

Purchased From: Just For Him site

The Virginias are fermented dark fruit sweet with some citrus, earth, with some tangy, bitter sourness, and has the McClelland "vinegar" flavor all the way through. The perique is plum, raisin, and some pepper. The flavors are obvious in every puff, though the pepper from the perique is more noticeable at times. It needs some dry time because of the PG. Requires a lot of relights, and leaves moisture in the bowl. Needs to be smoked at a slow to moderate pace even though that contributes to the constant relights. Has a mild nic-hit, and a lingering bitter sourness in the after taste. I would rate this higher, but the PG really lessens the enjoyment of the smoke, something I notice in many of the Just For Him blends. Two stars (barely) for the flavor, but with so many better tasting VaPers on the market that also don't swim in PG, I can only give this one star.

This blend was a disappointment. It sounded good, but the smoking was a little "meh." I got a vague, nondescript sweet in the first half of the bowl and a few notes of plum and pepper from the perique in the last half. It came as a sample from a friend, and was at a pretty good state of hydration. It smoked easily enough and did not burn hot or have to be lit again every 5 min.

It may be that some topping had flashed off, but this just did not have much flavor. I did not get any of the signature Virginia notes except for a little sour when puffed.

This is better than not smoking, but there are lots of great VaPers on the market that I like. This one gets a pretty tepid recommendation.