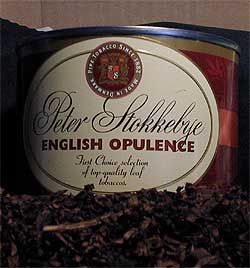 I admit my tin was seven years old, and perhaps that's why I never felt the heat that some other reviewers have noted. I found English Opulence to be an outstanding smoke. I would compare it favorably to a dummied down Dunhill Nightcap. Not as strong or deep in the flavor department, but great for mid-day smoking. I appreciated what to me was a very fine Syrian Latakia and the touch of Perique was noticeable but way off in the background... just enough to keep me interested.

A friend of mine purchased a tin of this delightful mixture awhile back, and I finally got around to getting a full sampling of it and must say that it was quite good. Let me start by discussing the tin. I LOVE this sort of tin, because I find that it keeps the tobacco very fresh, and after throwing back a half-used tin of this nature for about 4 months, and then re-smoking, I found it almost as good as new. In case you don't know, most (or all, I'm not sure) stokkebye tobaccos come in the paint-can style tin, with the lid you tap (or hammer) on after opening and using it. The aroma in the tin struck me as very "normal" for a latakia/VA/perique mixture, but that is a good thing, as I really enjoy the rich, spicy, subtly sweet aroma of said tobaccos. Packing is quite easy, its in a ready-rubbed form, moderately long cut, pieces were about a quarter to half-inch in length, so the gravity feed was easy. Upon first lighting, the charred tobacco turned a very dark grey color which sort of alarmed me (I'm used to a lighter colored ash), but that had nothing to do with the flavor, which is wonderful. After the tamp and relight, things burned smoothly, and two relights were only needed to finish up the dottles at the bottom of the bowl. In the first third of the bowl, the flavor was very rich in golden virginia flavor. The natural sweetness outweighed all the other flavors which came as sort of a let-down, but things quickly improved. About halfway through the bowl, the flavors all married nicely to form a very full flavored, rich smoke of virginia and latakia. Maybe the other tobacs were used in very small amounts, but I didn't detect either perique -or- orientals at any point through the bowl. Of course, that may also be due to my less-than-stellar palate, but I digress. The final third of the bowl was by far the richest and most enjoyable. I was very glad I chose my gourd calabash for this tobacco, because I simply didn't want the last part to end. A nice, full tobacco that is excellent for after-meal purposes, or a late evening lounging.

This is a close relative of "Proper English" and like it, there is not much here that would call me back. It has the typical cut and aroma of "English" but when in a pipe, it sadly disappoints. This one seems to burn even hotter than its relative, which makes it even less appealing. I worked through the tin, but with so many great blends in this genre, I have to say "no mas" to this one........

I found a tin of this stuff sitting in a pile of dust and cobwebs at my local tobacco shop. figuring it was aged (it was), I bought it. I must say that this tobacco is almost there. For en English blend, it has the perfect leaves: Latakia, Oriental, VA, and Perrique. It is really nice tasting, and has a nice, smoky, piquante kick for a cold winter night. However, the tongue bite is almost unbearable! When I smoke it, I feel like 100 angry wasps are stining my tongue over and over. It is almost too much to take. I am hoping if I continue to try it, that will subside, but it has not yet. A fine, fine tobacco ruined by tongue bite is my overall assessment. But if you like English, try it. Maybe it will not affect you as it did me.

After enjoying Stokkebye's cheaper English Luxury blend, I expected this to be a more refined big brother. I was sorely disappointed. Judging by the cut and tin aroma this blend should be a nice smoke but as we all know, initial appearances are often misleading. This blend is a chore to keep lit and when it stays lit, it has a Latakia harshness that sticks to the tongue like a demented lamprey. I do enjoy a good Latakia blend but this stuff just hits like a flamethrower. I ended up drying out the contents of the tin and using them for experimental mixing purposes...har har.... Anyway, I like Stokkebye's Virginas quite a bit, especially the Luxury Flakes but after this masochistic experience I'm never buying one of their English blends again.

I'm with CJ on this one. I tried two bowls of this tobacco. Both started out with a nice light to medium english blend flavor, but by mid-bowl my mouth was so fried I couldn't taste the rest. Nice tin, though. Some credit for the nice flavor, but on the whole 2 of 10. If anyone wants the rest of the 100g tin please let me know. - Kelly

I'm not sure if I should review this, but here goes. On opening the paint can container, one is greeted by a musty aroma of oriental tobacco. In appearance, this looks like a blend that I would appreciate. Its mainly dark fine stringy ribbon with some lighter components mixed in. It looks and smells like my kind of blend. The first few puffs show much promise. Its deep, smoky and creamy. But after about 10 puffs, it turns into the worst tongue bite that I have ever experienced. I just can't get past this point. It feels like I put dry ice in my mouth. I have tried this about a dozen times in various pipes with the same result. I have never even come close to finishing a bowl. This happened to me once before with a different blend called, I believe Oriental Pleasure. Its has to be my body chemistry. I seem to have a violent reaction to a particular type of tobacco, but I can't narrow it down to a specific component. Out of at least six dozen different blends, these were the only two, so far, that affected me this way. So this is not for me, but that does not mean that it is not for you. It looks like it would be a great smoke, but not with my genes.

About a year ago this was one of my favorite tobaccos and I was smoking more of this than just about anything else for a period of a few weeks. Well, I picked it up again to see if it would still catch my fancy as it once had...

The tin aroma is pleasant but unexceptional with an interesting intermingling of the smokiness latakia and spiciness of the perique. The perique is surprisingly obvious in the tin aroma.

What seems to be Syrian latakia strikes me as just a little too predominant in the smoke. I'm not exactly sure what it is, but I find the blend distinctly unbalanced. The perique surfaces from time to time, but it just doesn't complement the blend as well used perique should. I also expected the orientals to smoothen the harsh edge of the latakia some and they just aren't. The edge on the latakia is very sharp and mutes the virginias to the point that I have to struggle to taste them. On the whole, it isn't a horrible English, but it definitely ain't my cup of tea.

Perhaps my tastes have just changed that much in the last year (I've gone from an invenerate Latakia man to a smoker of Virginias), but this doesn't appeal to me anymore. I might try it again in the future, but I doubt I'll keep it on hand.

I JUST PURCHASED A 4 YEAR OLD TIN AND IT WAS FANTASTIC! THIS IS THE ALL DAY ENGLISH SMOKE! IF MCCLELLAND PRODUCED EUROPEAN BLENDS THIS WOULD BE IT. SLIGHTLY SOUR AND LIGHT ON THE LATAKIA,IT IS TRULY A FLAVORFUL SMOKE. THE AROMA IS MUCH LIKE THAT OF BAKING BREAD WITH THE CRUST SLIGHTLY CHARRED. A VERY BREADY TYPE OF ENGLISH WITH NO BITE AT ALL. SMOOTH AND RICH WITH A LOT OF NATURAL TOBACCO FLAVOR. IT IS VERY SIMILAR TO GERMAIN'S "KING CHARLES" SANS THE "GERMAINEY" FLAVORING. VERY GOOD STUFF!3 OF 4 STARS!