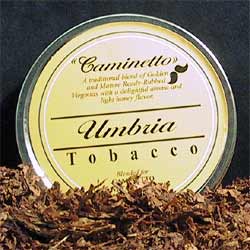 Although long gone and difficult to find these days, Umbria was a sensational Virginia that was light in taste and had an enhanced sweetness due to the discreet addition to 100% natural honey. It burned dry and clean and had some depth despite the lightness. I smoked slowly as I tried to coax all the flavor out of each puff. It really was a remarkably delicious blend.

I came across a tin of this that I bought in the 70's. I didn't like it at the time. It would bite me, or I was smoking it in such a way as to make it do so.

To rehydrate, I steamed it for 30 minutes, and then pressed it over night under the weight of a very heavy transformer. I wondered if I would find a pug under there this morning, but I didn't.

The tin(foil) note is very much like Grousemoor. In a Cobb cob pipe it is similar to 1792. It tastes like several VA flakes that have a mystery topping. I detect no honey flavor. More mysterious like tonquin. Almost scary, but the finish is VA tangy.

It is quite nice, actually, under these circumstances. I have a tin of Lombardo, and a little Como (I must have liked Como) that I may rehydrate. I don't know that I am motivated to buy a tin of new Umbria, but maybe.

07/27/09 UPDATE: I am revising some of my reviews. I have given out more 4 star ratings than anything else. That practice is probably not helping. So, I am reducing Umbria to 3 stars, not because I like it less than I did before, but because I am limiting 4 stars to fewer than 25% of all my reviews. One day I may use the 4 star rating to designate my top five.

Umbria, for me, was simply the typical "hot air" smoke. I tried a tin of it before I became aware of the Bufflehead aromatics and, even then, there were plenty of aromatics that left Umbria in the dust. There is just nothing to it. Wouldn't buy it and so won't rate it even a single star.