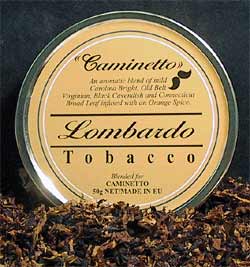 I have changed my review on this after the whole tin.

Tin Opening Mottled leaf, ribbon cut. It?s an attractive tobacco that isn?t too goopy. There is a slight hint of Orange but the orange is overwhelmed by the topping which has a predominately floral note. On opening, it is wetter then I like. It also initially smoked wetter and hotter then I like. As a result, this tin was stored and I forgot about it for 2 years after opening before I tried to smoke it again. After two years, the tobacco was still good, which makes me wonder what they put on it that it would stay preserved when other tobaccos were bone dry in the same drawer.

First Impression The floral notes hit you first. It is fairly light in flavoring, but pleasant for an aromatic. It?s a refined aromatic that mingles tobacco taste with the topping.

Mid Bowl The taste remains consistent, though the initial floral taste mellows a bit and the orange never really develops. It is fairly monochromatic in taste, but it?s a good taste and the room note is very nice. It has a tendency to wet the pipe.

Finish Just as it was from the beginning. It doesn?t have the depth of other blends but then again, I don?t find most aromatics than multidimensional so that isn't a reason to knock it.

Over all At one time I wrote in my notes that it doesn?t carry enough interest to enjoy it more then once in a while blend or as a change of pace blend. But when I?ve reached for an aromatic, this is the one I tend to want, even more than Blue Note. There aren?t many orange aromatics and while this has a slight orange to it, it doesn?t pop with any sense of orange the way most cherries do but then again, this doesn?t have the mouth scorching tendencies that most cherry blends have.

Recommendation Yes - Overall, a very nice and different aromatic. Caution, the scent stays with the pipe.

This was not really a great smoke, but not bad either. The flavoring did not really taste like orange to me but it did present a tart aftertaste that I actually liked. The Virginia presence battled past the flavored Cavendish enough to where I thought this would be a nice aromatic for those who enjoy this style, especially since there was some unflavored Kentucky in the mix to bolster the strength. Unfortunately, now that Lombardo is long gone (Caminetto spit the tobacco bit a decade ago), the aromatic crowd will need to look elsewhere.

A pleasant surprise. My local tobacconist gave me four sample packs of Caminetto blends to try. Only two were still smoke-ready for moisture: this and Barolo. I loaded this up first before checking for any reviews here and so this review is unbiased as far as I can make it (speaking subjectively -how paradoxical). I knew as soon as this was lighted that there was some fruit topping, but I could not place it as orange. It was not heavy and did not drown out the fine tobaccos underpinning the blend. Not being a regular aromatic smoker I was somewhat glad to find a blend of this type that did not remind me of some cheap syrupy OTC blend. Wife loved the room note. I would buy a tin and suspect I might take it to 3 stars with fresher product to sample.