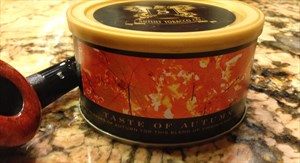 Autumn invokes a sense of pleasure with splendid colors, brisk clean air and abundant harvests. The rich spicy flavors of autumn highlight this tasty Virginia and burley based Aromatic.

A tasty medium aromatic with a multiplicity of flavors. The smell of the tobacco in the tin is much stronger than how it tastes. Pumpkin is one of the major players, though I perceive an essence of cooking wine. At the halfway point, I got bare hints of vanilla from the black cavendish, honey from the gold cavendish, and a very slight hay Virginia note. A touch of vanilla is also in the topping. There's all-spice, cinnamon, and nutmeg hits throughout the entire smoke. Won't bite or get harsh. Burns at a moderate pace, cool, clean and creamy smooth, though it may benefit from a slight dry time. Has a slight inconsistency of flavors as some weave in and out a mite. Leaves a little moisture in the bowl, but no goop. Needs an average number of relights. Has a very pleasant after taste. It's one of those blends where the taste grows on you after a few bowls. While it'll provide a nice seasonal treat as the name implies, it also makes a good summer time blend while you're out in the fresh air. Not quite an all day smoke.

Tin note is almost over the top pumpkin pie spice with a distinct creaminess. Very moist, but not gooey. Lights easily and stays lit fairly well. Taste is nowhere near as strong pumpkin as the aroma. Nice toasty, slightly spicy and sweet. Mild strength makes this an all day smoker. No tongue bite even when I puff hard. At first I thought I made a mistake buying this, but I am glad I did.

This 2-yr.-old tin, which I got on ebay for $4, has been one of the nicest little surprises in my pipe-smoking life. The other "Tastes of" blends (Summer, Spring, whatever) sold but this one kept getting relisted. Thought I: how bad can it be for $4?

Gents, ya' can't just go by reviews here. TOA was rated a 2.5 when I tried it. The tin note is strong chocolate with a vinegary pungency characteristic of aged Virginia. The smoke is wonderful, full of taste; enough nicotine to validate the blend for me but not a nicotine bomb. Amazing--how something can taste so different than the tin note. TOA's poor reviews mean that it doesn't sell for much on fleabay, even when well aged. Very impressive smoke. And I no longer mind the tin note.

I think reviews of Sutliffe blends suffer in part because of the Altadis connection. But in 2013, Altadis sold its pipe tobacco operations to Mac Baren, which included Sutliff, A&C Peterson, Benjamin Hartwell and more. I have no doubt that these blends will only improve now under MB.

I can't help but think of this as a gimmicky type of blend and perhaps it is because I chose to start smoking this at the same time many of the pumpkin spice beers, shakes, lattes, ets. were all coming out for the season. Being someone who is not a fan of this flavor on any of those other things, I also was not too crazy about this blend.

As an aromatic though, it is pretty well done. Sutliff can make an aro and if you like pumpkin spice, then you will likely enjoy this blend. I had a two ounce bag of this and it may seem strange that I was able to finish the whole bag when I disliked it. I will say that with each bowl, it was pretty terrible at the start, but as the topping lifted a bit, particularly passing the mid bowl part, I started to enjoy the flavor. This is when the burley was complimented by the topping and I could actually taste it. There is one odd thing about this blend and it has to do with the tin note. Although I know this to be a pumpkin spice topping and it tastes like pumpkin spice. The tin note to me smells just like eggnog. Strange, could just be my sense of smell.

So, I would sum this up as saying that this is a good aromatic, but the topping is not to my liking. For me the true taste of Autumn is Latakia with burley, and for an aromatic, I will stick with Autumn Evening by C&D.

Pumpkin and a creamy Nutmeg seem to dominate this aromatic. Excellent room note and flavorful dense smoke. Well rubbed out and easy to pack and light. Burns well once lit but took a couple of tries. As the tin progresses, it dries a bit and lights more easily. This is a pleasant smoke and fits the cool autumn season very well. A recommended change of pace.

Age When Smoked: 2 years in the tin

Got a tin of this as a freebie promo at a pipe show. When I opened the tin the aroma was interesting, but it was so wet it wouldn't even light. After drying it for about a week I tried it in 3 different pipes before throwing it out. The flavoring was so strong that I could detect no tobacco taste whatsoever, and it left a puddle of goo in the bottom of the pipe. It brought to mind a smoldering bird's nest, feathers and all. This is easily one of the 2 or 3 nastiest "tobacco" offerings I've ever tried to smoke.

Similar Blends: nothing else, I hope.

Im a big fall/halloween nerd, so I had to try a tobacco with autumn in the title. I think I expected too much from this blend and I really did not care much for it at all. The flavor I got from it was more of an orange/cream Popsicle thing, with a hint of nutmeg and a heap of hot air. I have given it a shot through a few different pipes and it really didnt get much better. For me this one just didnt work out.

==Updated 10/27/14== I revisited this blend over the weekend with a quality craft pumpkin ale and I will say that I quite enjoyed it. Im not sure if its because fall is in the air or what, but i really did enjoy it this time around.

What I did differently this time- Dried the tobacco out over night. Smoked in a cob. Sat on the front porch and watched the falling autumn leaves. Cracked open a bottle of Shipyard Pumpkinhead ale.

Still rate it as somewhat reccomended.

The wetness that others experiences wasn't that big of an issue for me. It needed drying time but wasn't goopy by any means. The tin note smells wonderful. Pumpkin pie and orange jello to my beak.

The room note was enjoyed by everyone I've ever smoked this in front of. The smoke was just too mild for me. I didn't get too much flavor even after smoking past the 3/4 points. It's nice to see an aro that goes beyond the traditional Vanilla, Rum, Cherry cavendish but for the first time I would want more topping.

This tobacco is just not for me.

Tin Aroma: Pleasant and strong aroma, took me a few tries to peg it down but it strongly reminds me of a good cup of eggnog with lots of fresh nutmeg and a healthy dose of spiced rum

Taste: Some of the times I could get a hint of vanilla but I've now smoked the whole tin and pretty much every bowl I couldn't detect much flavor at all.

Smokability: After smoking the tin I only got some light tong bite on a couple of the bowls but for the most part it smoked cool. Several bowls had some wet clumps at the bottom and for the most part I was able to smoke the whole bowl. The tin I had wasn't overly wet but I did let a few pinches dry out for a few hours on the more humid days, sometimes this worked and let me smoke the whole bowl and sometimes not. The times I let it dry out the smell seemed to evaporate more quickly that other aros to the point that there wasn't any smell left in the tobacco or the smoke.

Room Note: The first half of the bowl the smell in the tin is very present in the air, after that though only a very mild hint of vanilla is left.

Thoughts: Personally I'm not much of an aromatic smoker but this was given to me so I gave it a shot. It smoked cooler than most aromatics I've smoked and has a pleasant aroma but I'll probably pass on it in the future for one of the other Sutliff aromatics.

Very tasty, and fairly dry burning for an aromatic. Pleasant bursts of nutmeg and cinnamon throughout. It reminds me of walking through a craft store in the autumn, when all the fall candles and scents are on display. This may be a turn-off for some, but I enjoyed it.

Despite the flavor, the wife was unable to pick up on the cinnamon-spice flavor in the room note, detecting only a generic "aromatic" note.

A nice blend, but it's a a tad too wet and sugary in my opinion. Dense and inviting tin note. It took several tries to get it lit in my cob (not to mention the occasional clumping). Once it got going, it was cool smoking and refreshing. However, if you like soggy pumpkin pie drenched in egg nog and you want to have diabetes by the bottom of your first bowl, then TOA is for you. The pumpkin, nutmeg/eggnog note never overpower each other. That's the blend's drawback-nothing sticks out and it's too gentle and wet on the pallate. Even after you let it air out. I like Sutliff' blends but the black cavendish they use tends to be way too wet/sweet in some of their aromatics. If it were me, I would have used toasted cavendish instead. That would probably bring more balance to this blend. Nevertheless, this is a fun smoke with a nice taste of fall flavors. A tad more spice, a little less sweetness and a slightly dryer mxture would make all the difference.

Update 8/24/2014 I've been smoking TOA out of a Dr. Grabow Grand Duke and the blend behaves well. However, it seems too subtle on the pallate. Light up is still an issue. After a few tries you get a long, smooth smoke and no ashy aftertaste. I'm still asking myself was Sutliff aiming for nuance or spice with this blend. A fellow reviewer mentioned this as one of those blends that could be smoked in summer or fall but it could pass for anytime of year as well. So I'll upgrade to three stars for TOA's ability to weather any season and it's smoothness, but save this one for the briar. I'm still asking myself nuance or spice.