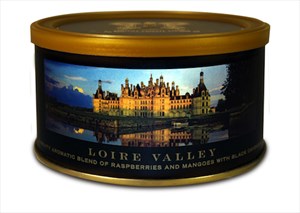 A sweet aromatic with a black cavendish base, though this blend barely has any hints of vanilla. The black cavendish mains adds a smooth sugariness. The richness of the raspberry is the predominate flavor, and sublimates the tobacco quite a bit. The mango is fairly mild, and I had trouble detecting it. Has little nicotine. Won't bite or get harsh. Burns cool and clean at a reasonable pace with a very consistent taste. Leaves little moisture in the bowl, and needs an average number of relights. Has a very pleasant after taste and room note. Can be an all day smoke.

I received a good sample of this one in a baggie and decided it fit well enough in my bag I was taking up hunting. When I got there I realized I did not have many aromatics packed and decided I would smoke the whole bag while I was up there. I used my Altinok Canadian almost exclusively.

Reviewing aromatics is always troublesome for me, because it is hard to find a subjective standard. I talked with reviewer extraordinaire Mr. Jiminks about this on the phone last night and he broke it down for me this way. There are two different types of aro smokers. Those who like topping only and those who like a light topping with a good tobacco taste to go along with it. I am of the latter camp and think that this blend caters more to the former, but I kind of liked this one.

I smoked this whole bag without ever looking at the reviews and now am surprised at what I found. On the first few bowls I thought it tasted berries, but later convinced myself that it was cherry. I did not get mango, but perhaps the combination of raspberry and Mango is what made me taste cherry. This aroma was pleasant and very present at light up, but never overwhelming.

later the taste to me turned to a molasses maybe anise type flavor of which I am not too fond, but still not overwhelming. I did detect some PG, but it blended well with the other elements. I think that an aro smoker who goes strictly for aroma will really like this blend as there wasn't much of a tobacco taste to the blend. It smokes well and is a crowd pleaser.

Tin Aroma: As the description on the tin says there is heavy raspberry flavorings but wasn't able to detect any mango.

Taste: During the first few puffs I got a lot of sweetness with a mild taste of raspberries. The sweetness toned down after a few puffs but the raspberry taste stuck around with a very creamy textured smoke. About halfway through the bowl the raspberry flavor tends to fade away and I begin to detect the mango.

Smokability: This blend smokes cooler and drier than most aeromatics I've tried although I still do get a small clump of wet tobacco at the bottom of the bowl that won't burn.

Room Note: Room note is very pleasant and passes the wife test. Almost immediately after lighting up each bowl of this she has commented on the good smell. Again the smell of raspberries is predominate for the first half of the bowl which goes away at which point I do not get a small of mangos like I do in taste however this time of year my allergies play havoc with my nose.

Thoughts: I generally don't like raspberry flavored things and while the aroma in the tin is a bit overpowering for me the taste and smell of the smoke is very pleasant. After many bowls I have only gotten a little bit of bite a few times and that I account to me smoking it too fast. It smokes drier than most aeromatics that I've tried and have also enjoyed it the most. I'm not much of an aeromatic smoker but I'll likely keep a tin or two of this in the cellar and look forward to trying my next Sutliff.

Description on Tin: A fruity Aromatic blend of raspberries and mangoes with black cavendish.

Taste: First light, all raspberry, very creamy smoke and flavor to it. They say there is mango on this, but I'm not getting it at first light.

Room Note: Super pleasant, everyone seems to enjoy the room note. It passed the wife test on room note as well.

Thoughts: Received this as part of our Austin Pipe Club sponsorship from Sutliff. I'd say this is a spring summer time smoke when its a bit warmer outside. Its a good aromatic that lasts most of the way through the bowl and because it's a cavendish its very low on vitamin N. I smoked this several times in a couple pipes and each one burned just about all the way down, especially when smoked in my meerschaum lined Brebbia. It's also a bit drier in the tin than say molto dulce and thus I did not feel the need to dry it out prior to smoking. It really does produce a creamy smoke - reminds me of heavy cream over raspberries or blue bell ice cream.

Recommend to: Aromatic smokers who are looking for more premium quality tobacco.

Why oh why did I only buy 2 tins of Loire Valley. I cannot believe I haven't tried the SPS Tobacco's before now, they are a very nice range of quality tobacco's. I love the Rasberry flavor that comes through when smoking this tobacco, both the tin note and taste are quality, pity it overpowered the mango but that doesn't make me not want to smoke this tobacco. My next order will include at least 6-9oz of Loire Valley. I have put some into a jar for aging and the rest in my rotation jars. If you like Aro's then you need to try Loire Valley at least once.

Raspberries and more raspberries! I could only taste and smell raspberries. Not a favorite for sure. I recommend this only for those who want no tobacco taste from their smoke.

Description on Tin: A fruity Aromatic blend of raspberries and mangoes with black cavendish.

Pipe Smoked In: Missouri Meerschaum, and other various briars

Taste: First light tasted creamy smoke. When the embers cooled in a few seconds the taste of Raspberry soda, very strong in flavor and creaminess from the cavendish. I could not detect any mango as the label suggest.

Room Note: The room note is very sweet and pleasant. I have smoked it around various people outside and have not had any complaints

Thoughts: This came as a sample to Austin Pipe Club from Sutliff. In the last few years I have almost given up on aromatics for reasons ranging from Goopy tobacco, great top note but bland to harsh tobacco flavors. Loire Valley has helped change my mind. The tobacco out of the tin was moist but not goopy, I did not feel the need to dry the tobacco out. The tobacco was pure black cavendish which gave a nice light creamy smoke that was not bland or boring. I smoked it in very different size bowls and it was is to smoke with out many relights. I only had a few moments of gurgle which I will take the blame for smoking to fast. My only negative observations is the asymmetrical cut of the tobacco leaving a lot of large thick cuts and lots of dust.

Loire Valley has been a great smoke here in central Texas with our Temps still reaching in mid 90's. I will probably be reaching for orientals and english as the heat drops in the next month but I plan on keeping this in my summer time rotation.

Recommend to: Anyone looking for a high quality aromatic.

The aromas of this tobacco when you open the tin are great, smells like honey, fruit and red fruit.

But the taste is very mild, almost flat. I would expected more.

This is a decent blend. I wish the berry flavor came out more than it did. Better than your average aro, but nothing about really sticks out as being great. I would smoke it again. solid 2.5 stars.

A very, very, very sweet overbearing raspberry that leaves an aftertaste long after the smoke is finished. I was still tasting this 2 bowls later. I would most definitely not recommend this tobacco for the English, Virginia, or Oriental smoker.

If you like aromatics, and a wonderful room note, this is pleasant enough. I was just not a fan of the overbearing fruity taste.

Other characteristics - No tongue bite, and burned relatively cool, with no gurgling in the pipe. It smokes like a decent tobacco should.