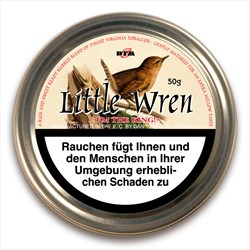 In fairy tales, he swung with List on the king of birds: The wren - one of the smallest, most insignificant birds on our latitudes, but one of the loudest! A fitting name for this ready rubbed cut plug. Light brown Virginia with a hint of black cavendish, pressed together and matured, refined with a new attractive flavor, fresh, with sweet and floral tones, incredibly soft and fragrant. A truly "royal" pleasure.

The light brown Virginia is earthy with some citrus and a little dark fruit. A hint of unsweetened black cavendish provides a touch of brown sugar smoothness. The various fragrant, floral sweet toppings fairly sublimate the tobaccos. The toppings include a light clove and some rose, among others. The nic-hit is just past medium. Won’t bite, but does sport a slight rough edge. Burns at a reasonable pace, and the topping does tone down a little after the half way point, but remains obvious all the way through. Has some unattractive bitterness at the finish. Requires an average number of relights, and leaves a little moisture in the bowl, but no dottle. The after taste and room note lingers a bit. Not an all day smoke, and I recommend a slow puffing cadence. A blend for acquired tastes.

If you like Liquorice or Pastis, go with it. The tobacco is of exceptionnel quality and is nothing but flavoured natural. In Germany kind of unique stuff. Some say it´s like condor, both share an intense aroma, but Condors is much more artifical and indefinable.

I was sent a sample of this from a friend in Germany along with a sample of Peter Rasmussen's green label. I found these two blends to be pretty similar, but this one seemed to be a lot more floral; whereas, the PRGL had a much fruitier profile.

The topping on this one seemed a lot like condor's topping, but the base tobaccos to me were much more a Virginia where Condor has a substantial amount of burley that I feel is a better compliment to the floral topping. The base on the little wren is also pretty light and the topping seemed to flash off substantially in the first third of the bowl leaving little left.

I smoked it in Meers and cobs as I do with most my aros. Last night I loaded up my Baki Volcano with the remaining amount of the sample and found myself incredibly bored with the smoke by the end of the bowl. I ended up dumping it a little early as I just didn't want to smoke anymore. And this had nothing to do with having too much nicotine. Not that I smoke an aro for any deep contemplative reasons, but usually I would take the blend down to the dregs.

I preferred the green label to this one and can't really recommend this one in good conscience as I just don't think it is a good aromatic tobacco and there are just too many out there to waste time with this one.

I read some reviews comparing Little Wren with Condor and Lakelands. So I wanted to have a go with a German take on the theme. My verdict is that Little Wren has a similarity with Lakeland scented tobacco only in principle but not in taste.

Little Wren has a very good tobacco as base, it is smooth, it burns well, does not bite, smokes dry, everything perfect in these matters. But if Lakelands smell and taste like an old lady’s knickers drawer, i.e. perfumy, then Little Wren smells and tastes like a gentleman’s perfume, like an eau de toilette - Givenchy Gentleman - to be more accurate! And the scenting is intense, not to say overwhelming.

It’s a good tobacco, it does not taste natural like Lakelands, not floral, since eau de toilette does not taste natural, it tastes like eau de cologne. And while Room note is not offensive, it’s not extremely pleasant either. I can but only somewhat recommend this tobacco because it has a very peculiar taste as I described. Still I regard it as a quality product. Yet I do not think that I will be finishing my tin any time soon…

And be careful it will severely ghost your pipe - use a corn cob!!

Cold smell is pretty nice and floral, a bit fruity too with hints of tobacco behind that. Reminded me of St. Bruno RR. But with a lot more moisture in this one.

Dried out for several hours and still was pretty moist after that and hard to pack in a smaller bowl (as I tend to use smaller for aromatics) took flames pretty nice and for the first half it burned steady and even with no relight needed. First for the topping that is present but not too much as that it would overcome the pressed tobaccos. Floral and liquorish A bit like Bruno again. The leaf is less characterful though a bit milder and much of cavendish which I do not like that much. Both of that together create a honey like flavor like the artificial honey flavor of Mac Baren f.e. which I also don’t like. In the second half the aromas did vanish a bit and the pipe needed some relights. Filter was dripping after the smoke and I left some crumbles because of a sour taste in the end.

I’m ok with it but it’s not gonna be a favorite. Topping is nice but the ground tobacco isn’t really my cup of tea

Leaf: Ready Rubbed Cut Plug as per description, short/moderate length pieces of broken tobacco, still fairly dense but easy to rub out or break up more. I left it as is. Medium brown Va’s with maybe 20%-30% Black Cavendish. A Uniformly medium/dark blend.

Tin Aroma: This blend smells great, it has a strong stewed fruit, cake like aroma, slightly floral but not soapy, not sure if it has maybe a liquor topping but there is a hint of something not unlike it there, almost like wine or a port smell, likely from the fruitiness. Does not smell like a cheap, artificial aro.

Taste: While not a particularly one dimensional smoke, it certainly wasn’t complex. I would describe it as “consistent”. Surprisingly it tasted much like it smelled, though not as intense. The fruitiness is there, the VA’s are fresh and grassy, and the floral comes through just a hint but there is no soapiness that can turn some smokers off (or on if you are one of those Lakeland loving characters....I kid) The fruitiness in the smoke was much less pronounced than in the aroma but still lingered, which I think attributed to the slight tanginess I picked up. As an all day smoke it was easy to handle and very satisfying to puff on while going about your work. The nicotine level was a surprise when I packed my first large bowl and puffed away mindlessly, quite a kick for what I would call an aromatic. Stayed pleasant from start to finish with little to no transitioning. Definitely a fresh, high quality blend.

Smokability: Tobacco was a little on the moist side but I never bothered drying it and never had a drama. I never needed more than a standard amount of relights and didn’t get moisture coming from it as I smoked. Always burned all the way to the bottom to a good grey ash with no wet left over’s. Didn’t burn hot or nasty and was friendly on the tongue. Very easy to smoke.

Summary: As a fan of bigger bolder blends this was a welcome change of pace, especially as an “Aro”, although not the typical, gooey, artificial flavored type. Great fresh blend for warm weather, low maintenance, good simple, clean flavor that doesn’t require investment to enjoy, good nicotine levels too. I have another two tins which I am looking forward to getting to. Well worth a look as a bit of a crossover, Aro/Va blend.

When i opened the tin, there was strong pungent fruit smell. the smell reminded me of maybe figs and red wine or a stronger smelling Robert McConnel Black&Gold. The tobacco was pretty moist, so moist that there was some rust forming on the inside(the tobacco wasn't affected). The Tobacco consist of yellow to brown VA with about 30%-40% black Cavendish.

It burns really cool, can get hot if constant puffing(but hard to get it hot and to get tongue bite). It tastes like fruit, wine-ish and the taste is really consistent and sweet. I'm not a big fan of aromatics and i would categorize this as an aromatic. And i'm LOVING THIS. I don't find this to have a chemical taste. and doesn't turn bitter, sour or loses flavour at the end of the bowl.

This is definitely a early morning smoke or after dinner. i would definitely buy this again, just for the moments when i want a sweet tasting smoke. A MUST TRY FOR AROMATIC SMOKERS!!!!

after leaving this out to air a bit, the strong smell and taste disappear. but it does smoke good, just the taste isn't that strong anymore.

It's a quite dry ready rubbed flake. The smell of rose oil and other floral scents escapes the light brown tobacco. It's a heavy note and smells like perfume. If you do not like this in your mouth, stop now. The first puffs will taste like rosewater. Some find it soapy, but even these soaps ran out of fashion a while ago. It will keep this taste for the smoke but there will be some grassy virginia if you take your time. It's something special and I can see the craftsmanship here. But some people will hate it with passion. There is delicious virgina, but the heavy scent ist always there too. It lingers in your mouth, the air and ghosts heavily in your pipe. I like it on some somber summer nights. I recommend you take a whiff if you can. If you can't stand the smell you will despise the taste. But there is a place for the little bird and maybe you will find it very very delightful.