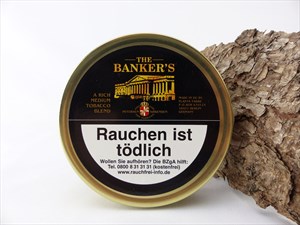 Medium strong mixture of tobaccos from best Virginia and Orient origin and plenty of Latakia, refined with Havanna leaves.

Very few blends were as wonderfully put together (IMO), than the original Ireland made The Bankers. The Planta version is also quite good and the Cuban wrapper leaf lends a unique quality, but not nearly as much so as the original Made in Dublin stuff. Quality Virginia and Orientals make for outstanding lead performances. Not the depth or as full flavored as the original, but still quite good.

This tobacco was recommended to me as an English blend that someone should try if he likes blends with a strong dose of Latakia. I bought it from Germany and I do not know how old was the tin. The scent of Latakia was present even from the air tight tin that it came in. When opened things became even stronger. The tobacco was in a plastic bag (something that I personally don't like) topped with a paper disc. It was quite dry, cut in small short pieces which made it easy to pack in the bowl. When smoked it had a strong taste and a strong characteristic smell of the Latakia that was in a generous proportion, it is close to a cigar. It produces a white thin ash, does not leave humidity in the bowl, and does not make a mesh of the bowl and the filter (was smoked with a 9mm active charcoal filter). For English blend users it is something that I would recommend. I seem to find it in online European shops but I am not aware if it is still produced.

Another one respectful English blend, cool dry smoke, no relights.Latakia coming together with Virginia, orientals staying on background.Cigar leaves noticeable on 2nd third of the bowl. Perfect even for all day smoke. Recommended.

The tin note is typical English, VA forward, but with Planta's standard base flavouring on it. Hiding in the corners is something cigar-ish, too, that promises some extra spice: this is not, as per the description, "cigar-leaf based," the main component is Virginia and the cigar leaf is applied as a spice. The leaf is a typical ribbon for an English, which makes stuffing and lighting easy.

The flavour starts out standard, but the cigar leaf comes out after a bit and does add that extra spice. Unfortunately, the Latakia's liquorice occasionally comes out on its own, too, which mars the overall experience. The flavour is sweet-spicy, some smokiness, and there is very little dottle left after an uncomplicated smoke.

Were it not for the liquorice barging in time and again, this would be a four-star blend, but things being as they are, I cannot give more than three. It's not bad as such, and if you like liquorice, go for it.

Note that this is a blend that caught my personal interest and at the time i smoked it it fitted perfectly to my taste, so maybe the rating i gave it is just due to a personal reference. But in the end, that's true with all reviews.

I liked this blend alot for its high Latakia content and the creaminess of its smoke. It was mild to the tongue and i found it a dark, deep mixture that very much reminded me of times long since gone. I could imagine that this is a blend Sherlock would have smoked.

I found it easy enough to pack and light. In the beginning of the bowl the Virginias deliver their sweetness but then the Latakia boldly takes over and after half the bowl it has a light cigar taste to it. So, progression of the smoke is really nice. Overall the blend is rather strong and in that regard i would not recommend it to the beginner. Also if not smoked with care it develops alot of moisture for an english blend, which you would regret towards the end of the bowl.

The room note was very nice.

I have no clue how this blend compares to Fox The Bankers as i had not yet the pleasure to sample that one.

This is one of the nicer Planta blends but it still is blended by Planta and has the typical Planta taste to it, which in this case i would describe as some slight hollowness. But again, it is one of their nicer blends - as a rule of thumb: if it shows the name Planta readily on the label then forget about it, if it does not, then give it a try, its worth it.

Overall, if you are looking for a nice, heavy, Latakia strong blend with cigar leaves in it then i strongly recommend trying this one.