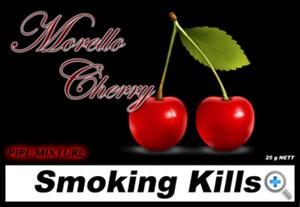 Comes in a generic pouch, as mixed by a tobacconists.

As a relatively inexperienced pipe smoker I thought id try a few tabaccos, but found it difficult to find anywhere that sells pipe tobacco near where I live.the one shop that was near me recently closed. I ordered from smoke king who are based in leeds, and purchased my favorite , petersons sunset breeze and a few samples to try. This morello cherry mixture is blended by the tobacco shop and I have found was a very rewarding choice. Upon opening the postage packet I was hit by a deleightful sweet cherry aroma that made me rip the packaging that little bit quicker to have a good sniff. Even a few days later I find myself having a sniff of my tobacco pouch! I had to have a bowl as soon as it was opened. There is a very nice and not too overpowering cherry flavour for the first few puffs which fades a little as you have a few more puffs. This cherry flavour comes through again partway through the bowl as a nice suprise. Overall a very pleasurable smoke with very little if any bite. I will definatly be ordering this again!

With Cherry aromatics being ten a penny I can't exactly say this one 'thrilled' me but on the other hand I have found most of Smoke King's blends to be good so I thought "worth a try"! Upon the first puff I realized that the flavour isn't the usual overly sweet, overly false and overly sickly one that is the status quo with fruity aromatics, refreshing as if there is an aromatic to be too prodigious in flavour then most of the time I find Cherry aro's fit the bill! The Cherries are not at all unrecognisable, what I mean is they don't give that fairground candy floss falseness but instead they deliver a mellow and soft genuine Cherry taste. The smoke itself is quite cool in temperature and also incredibly thick, actually one of the thicker I have tried. I wouldn't think that Morello Cherry would be that satisfying for a proper nicotine lover, it's only really noticed by me if I inhale a large puff of smoke! Morello Cherry does not bite at all, be it on regular puffs or huge ones it still remains redundant! The room note is a very steadfast Cherry aro' one, but as pleasing as I find it I think it would probably offend none-smokers with its weight... well definitely! All the way through the bowl the Cherry flavour stays at the same quantity, it isn't one to fluctuate from heavy to light but has the same Cherry equilibrium throughout. The burn has been good all along and at the end this is further attested by the tiniest amount of dottle.

Yes, Cherry aromatics are ten a penny but this one holds a certain quality that makes it stand above the rest! Four stars.