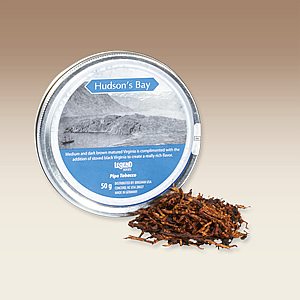 Notes: This was formerly packaged as (Mr. B's) Yacht Club, from the d-series -- only the label on the tin has changed.

As fellow reviewer Taste Buds indicated, Hudson's Bay is made to simulate the famous (or infamous) Dunhill Royal Yacht - a blend I loved when Murray's produced but now do not like as the Orlik version is not similar in any way according to my tastes. Hudson's Bay however, is similar and with aging, may be worth the effort to smoke regularly as a replacement. Not nearly as strong as Royal Yacht, and certainly without the same depth of flavor. But, I liked it and do believe it will cellar well.

This is supposedly R.L. Will's take on Royal Yacht. I find Royal Yacht to be too full for my taste, with more nicotine than I can tolerate. This is a much milder version, with moderate nicotine. The casing is of various fruity flavors, which I find to be very tasty. The Virginias are of the highest quality. To me, this is a Virginia aromatic of the highest order. Very smooth and delicious from start to finish. Burns to a fine grey ash. For maximum enjoyment, airing and drying is recommended. Rubbing it out fully is my preference for releasing all the flavor and improving the burning qualities. I think this is pretty special, but would like to read what other pipesters have to say.

As others have mentioned, this blend attempts to approximate the incomparable "Royal Yacht," which may be the most unique blend in pipe smoking because it utterly defeats any attempt to fence-sit: people either love it or hate it, as proven by the epithet "Royal Yuck" that follows it on some less-than-reputable pipe forums. The good news is that "Hudson's Bay" is a great blend that scratches much of the same itch, although it is distinct enough that it would not really function well as a substitute for "Royal Yacht," which like the North Star has such a personality that it cannot be confused with anything else.

Upon opening the tin, a strong note of wine or port wafts upward to tingle the nostrils, along with a faint tingle of detecting stoved and possibly smoked tobacco, a spicy slightly acrid smell. It comes wetter in the tin than "Royal Yacht," and the dark leaves are darker and more numerous than in the Dunhill blend. However, the heart of the 'Yacht -- those rich, honey-flavored Empire Virginias -- spring up and stand out enough to make any 'Yacht smoker salivate. On first light, the topping begins a quick burnoff, and by the time the first third of the bowl is done, the Virginias have caramelized and synthesized the stoved and flue-cured varieties of leaf to create a uniform flavor that is indescribable. In this, "Hudson's Bay" does what so far only "Royal Yacht" and a handful of other tobaccos have done, which is bring out the Virginia flavors through careful curing.

For those who like this type of Virginia blend, which is not so much breakfast cereal sweet but a mellow full warmth with undertones of honey, "Hudson's Bay" will be a delight. This is a perfect working tobacco because its flavor is composed of nuance and variation within a strong outer flavor, sort of like discovering new dimensions to a favorite novel while reading it again on a rainy night. It lacks the Nicotine punch of the 'Yacht, but for once, I really did not care. This is like discovering a tribute to an old friend who died too young.

Apparently, "Hudson's Bay" has also vanished into history and lore because it is impossible to find of late. This is unfortunate, because people who dislike "Royal Yacht" might find this blend more approachable. It is less subtle; this allows the full Virginia flavor to pop forth to the front of the palate instead of converging from the corners like an army coming out of the mist. It has a light tang composed of the stoved smokey flavor interacting with the alcohol topping, which despite burning off leaves its acerbic overtones within the blend. But as the leaf melts into itself, that warm and soothing flavor takes over, and like a ghost in the fog, begins to reveal its secrets.

"Hudson's Bay" will not replace the dearly departed and inimitable "Royal Yacht," but it has much of the same appeal and enough character and quality to be a worthy blend on its own. If you can find it, enjoy it, because blending this subtle yet flavorful is a rarity, and a joy to experience.

Thanks to Pipes Magazine forum member "cortezattic" for this sample.

Some very nice flavors in this broken flake. Modest sweetness and a mild tang. Darker fruit flavors, some of which is a light topping, and a touch of earth that shows as the bowl progresses. A quicker pace gets you more tang, but can get too sharp if too quick. A moderate pace keeps it smooth and pleasant. Overall, a very satisfying smoke.

My first experience wit Brigham tobacco, and from what I have discovered it won't be my last. Brindle flakes of Virginia with maybe some fruit casing meets you upon opening the tin. A deep whiff gives you the bready raisin aroma of the fermented leaf. Excellent tin note. After a bit of a stir up in the tin I pack it into a cob and go for a ride. Packs well and takes to fire like a champ! Excellent mouth feel and taste of fresh clover hay and sweet fruit. The fruit essence is more sublime in the middle and last parts of the bowl but the quality of the leaf last. No bite here but I did pull back and sip this one, burned clean to the bottom and left a medium and pale grey ash. As it stands I will give this a solid 3 with the hope of a 4 with a couple of months of dark jar time, that is if I can resist burning the whole to over the next 2 days. Started out with this at 5 this morning and have put a big hurt on the contents of that pretty round tin!

Age When Smoked: Fresh out of the tin

Wine-like and slightly sweet. Very smooth, with creamy mouth feel and good smoke volume. Lots of Virginia flavor and nuanced tastes changing throughout the bowl. No trace of anything sharp, grassy, or "hot". I didn't pick up on any artificial flavoring, although the fruity flavors abound in this blend, and it is hard to account for their clarity if this is indeed a pure non-aromatic, as advertised. Top notch stuff, in my book.

Love it as an every-day smoke. Doesn't matter to me what it's trying to imitate. Well-rounded and smooth to my taste. Found it on sale at Iwan Ries in CHI a few weeks back. Probably wouldn't have bought it if it wasn't on sale, because I knew nothing about it. Wish I picked up more - the extra state sales tax for out of state tobacco purchases of 30% was a bit high for my wallet.

Age When Smoked: Me or the tobacco?

I've never been a fan of straight Virginia's, especially the stoved variety. Hudson's Bay, however, may change my mind. It smokes cool with plenty of flavour in every briar in which I've tried it. When you first open the tin, you are engulfed with a smell that reminded me of juicyfruit gum. This fruity taste rewards every smoke, along with hints of incense and a herbal note. I'm guessing that this hasn't had any additional flavouring added ( as is stated on the tin) but I wouldn't be surprised to learn otherwise. It looks like some of McClelland's broken flake and smells a bit like some of the old Dunhill virginias. I can see this becoming one of my regular smokes, even in cold weather.

Age When Smoked: fresh off the store shelf

Well this Royal Yacht remake is pretty bang on! The tobacco composition and cut is much closer to the Murray's version than the current Orlik version. The topping is also closer, more of the fruity note that was typical of it. Orlik's version is very good taken as it is, without no comparison or reference to the previous version. There is also less nicotine in Hudson's Bay but there's enough to keep me happy. Burns well and dry to the bottom without any bite. Taste is awesome and not intruding on the tobacco taste. R. L. Will did a great job on Hudson's Bay. 3 stars and I will stash some up.

The medium, dark brown and stoved Virginias provide a fair amount of tangy dark fruit, earth, wood, bread, vegetation, some sugary stewed fruit, tart and tangy citrus, floralness, mild grass/hay, a few sour lemon notes, and a couple pinches of spice. The plum topping mildly sublimates the tobaccos, and moderately reduces the rough edges, though some sharpness remains. No chance of bite or harshness. The strength and nic-hit are a couple of steps past the center of mild to medium. The taste level is a slot past that, though it falls short of the medium mark. Burns cool, clean and tad fast with a very consistent flavor that extends to the short lived, pleasant after taste and room note. Barely leaves any moisture in the bowl, and requires few relights. An all day smoke that falls a bit short as a Royal Yacht clone.