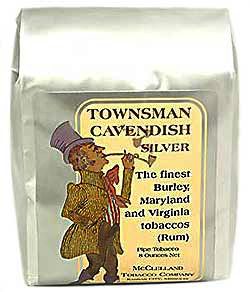 Is is the dark Jamaican Rum flavor that distinguished this blend of Burley, Maryland and Virginia tobaccos.

Nice aroma of buttered rum in the pouch and pleasant, lightly flavored in the pipe, TCS is pleasant, cooler than most light cavendish blends of this sort.

I taste the quality of the tobacco itself, which is good quality.

TCS burns to very fine, whitish ash without relights. It did take a few initial lights to get going.

This is a McClelland without tongue bite. Not being a smoker of aromatics or heavily cased blends, the free sample from my local tobacconist is a pleasant surprise. I would keep an ounce or two around for a change a pace.

Almost identical to the Townsman Blue with a rum flavor instead of maple. This version of the Townsman starts with a more subdued flavor but it fades more slowly than the Blue version. This is probably the best Rum flavored Aromatic I have tried and I think an all-day smoke. I might try mixing in a touch of G&H Rum Flake to kick it up to a four star smoke. Recommended. P.S.: Both this and the Blue burn a long time for an Aromatic.

The first 1/3 of the bowl was pleasant. It offered me a nice hit of nicotine; I also tasted a real tobacco flavor and the subtle sweetness (although I never would have guessed Rum) stimulated the pallate.

Then the heat set it.

Then I put my pipe out.

On my first try I packed the blend tightly, packed this way the blend made an intense aroma of a spicy nature. Later as the packing was loosened to attempt to gain more flavor the aroma also changed, the aroma is not overbearing with a nice overtone given by the burley and rum. A very natural aroma is given by the tobacco.

When this was packed tightly the taste was almost undetectable, it took a Coke or water to bring out the rum flavor. As the packing loosened the taste of rum and a woody taste of the smoke came forth. The smoke isn?t sweet and yet is very satisfying to the palate. This tobacco is layered as far as taste. With the blend burning hotter, a little bite is produced, but if time is given between puffs this will not be the case at all. If you don?t like the taste of some tobaccos like the ones that are in this blend then pack it in a filter pipe and it becomes a less woody flavored smoke. With one bowl of tobacco left in the pouch, the flavor came through and tasted just like the rum flavor; it took it that long to get through the other tobaccos smoked before this one.

During a cold morning in November Townsman Silver proved to be a nice complement to the coffee, pastry and orange juice that was consumed earlier. The taste was very fine with the stillness and wet air allowing the aroma to linger. Heck, this blend tastes good while eating a pastry and drinking orange juice!

In addition, this blend seems to go well in the morning as a complement to breakfast. In the evening, it will satisfy with a generous nightcap if you smoke this blend exclusively in your pipe. Though the taste of rum does not get me too excited, if you like rum, you will like Townsman Silver.

This is the rum flavoured version of McClelland's Townsman series. This is probably my favourite of the three. The tobacco is characteristically the same as the other two flavours - a little moist, with a propensity to bite when really puffing hard. For the aromatic smoker these make a nice tobacco due to the quality of the tobaccos used is higher than that in drugstore blends.