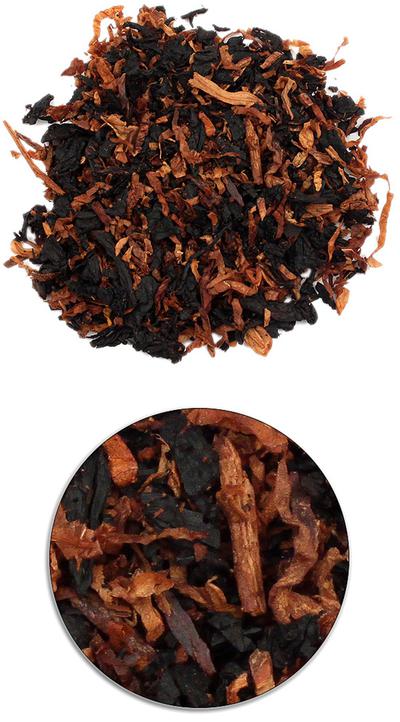 Tobaccos McClelland - No. 715 Raspberries in Cream

This is an elegant aromatic with the fragrance and flavor of fresh red raspberries in cream. Soft, light-bodied, artfully flavored with mild American Virginias and the best Black Cavendish, this blend is delicious all the way down the bowl.

Primarily a non aromatic smoker I first smoked #715 in 1980...was OK but I was more a matured Virginia flake/plug smoker...However, I would smoke a few bowls of this every once-in-a-while, until the mid 80's. Just re-acquainted myself with this and I like it...certainly not an everyday smoke for me but a few times a month suits me just fine. In the early 80's I believe this was far more heavily flavored than what I have today but it still has the essence I remember. You either like this or you won't...if you like a trip down the "aro" road occasionally, and like the taste of raspberries...give it a try...

McClelland - No. 715 Raspberries in Cream.

The blend is half and half: the Virginia's almost as slight as a shag, yet the black Cavendish is much chunkier. The smell from the pouch makes it easy to identify No. 715 as an aromatic.

The smoke from No. 715 is very good. To be fair, at the very beginning of a bowl the raspberries come over slightly ambiguous: definitely some kind of berry, but there's nothing idiosyncratic to raspberries. Once the burn settles more of the actual raspberry attributes come through: just sweet enough, but also slightly sour. The cream hasn't been added quite as heavily, but gives a very soothing flavour. '715 burns reliably, and gives me no tongue bite.

The room-note's smashing and the nicotine's mild.

As a primarily English smoker I would never ever smoke this all day, but I have to admit McClelland is on to something with this one. While it is still very much an aromatic the blend has a nice "real tobacco" taste as well. The C&D blend berry good came to mind when I was smoking this one. The taste is of burly and Virginia tobacco, with a subtle vanilla and berry taste. If it did not say raspberries I am not sure that I would have been able to distinguish that. The blend was a bit on the sticky side, but tolerable. I am afraid that if I were to dry it out, I might loose some of the subtle flavors. As is true with most aromatics, the flavor turns a bit bitter and gets a bit gooey towards the bottom of the bowl. However it is not bad enough to dump out the last third. Just make sure you have plenty of pipe cleaners on hand. The room note is wonderful, your wife will love it, nonsmokers will think highly of it as well. Overall as aromatics get this in in my absolute top three.

Got a 10g sample of this the other day. Opening the baggie it has that smokey BBQ sauce/ketchupy smell, combined with a hint of raspberry and cream.

When smoked, the raspberry came across as more of a tartness on my tongue than anything else. The cream flavour was OK, but kind of sickly after a few minutes. Reminded me a little of eating a cheap candy that uses a very artificial flavour.

The tobacco burned well, until the bottom of the bowl. It left a wet, goopy mess in the bowl after I had finished.

It passed the wife test, and in fact she said that if she was going to take up a pipe and join me, she would smoke this one.

Personally I was disappointed with it. Guess my hopes were too high. I won't likely be buying this again.

People new to pipe smoking, and possibly ladies might appreciate this tobacco though.

I didn't get any tongue bite, and there was only a small amount of chemical tasting nastyiness by the end of the smoke.

My first bowl of this blend, smoked in a Stanwell Majestic prior to heading to the operating room at my little hospital. First impressions:

2nd half: flavor emerges, sweet, tasty; not nearly as strong as I would wish

Overall: a somewhat unsatisfying smoke. The raspberry flavor is very nice but it is not strong enough. Frustrating to try to get a good, thick smoke without puffing too fast.

In fairness, I will let this dry out for a bit and then try it again.

Note: Kirsten pipes are a love/hate pipe. People either swear by them or at them. I am of the former camp and I find that the Kirsten pipes keep tongue bite away while allowing the aromatic compounds to reach my tongue. I don't recommend Kirstens for English blends, though.

Modifications: 3 Nording's Keystones to keep the tobacco from plugging up the bore hole.

Packaging: I ordered this bulk blend and it came in a ziploc bag. I put it in a glass jar and let it dry out for a few hours before sealing it.

Initial Impressions: Like most McClelland aromatics, this one comes a little damp and with a slightly sour smell. A little drying out and the smell seemed to lessen. The tobacco is mostly dark, with ribbons of lighter colors and a few flecks of gold.

Packing: Once dried, this packs very well. My Kirsten bowl only holds a small bit of tobacco, maybe one third of what you could fit into a Savinelli big bore.

Lighting: Charring light went off without a hitch. A slight tamping and a relight were problem-free.

Smoking (First Third): A really nice aroma of sweetness and berries pervades the first few puffs and then you're bathed in what I can only describe as a creamy, rich smoke. It may smell like you're puffing one of Mom's berry pies in a water pipe, but you'll love how the vanilla and fruit essences are blended so that one doesn't overwhelm the other. There is a good tobacco base to this and it plays like beach music on a warm summer's day.

Smoking (Second Third): The berry flavor really starts to mix and with the tobacco flavor, producing a nice thick slice of smoke to wrap your tongue around. You'll hear a bit of sizzle in the bowl (which is why I use a Kirsten), but I never once got tongue bite or stingy nose from this blend. It smokes at a cool temperature and lends well to medium puffing speed.

After Effects: This seemed to have a blessedly low nicotine content and the flavoring kindly refrained from burning its mark into my tongue. A simple brushing and Biotene rinse was enough to get my mouth into social condition. It didn't foul the briar and it burned down to a clean greyish-black ash that had no moisture in it.

Overall Recommendation: If you need a GOOD aromatic that makes everyone happy (including you!), then this is your tobacco. A simple drying ensures that the smokability stays high. This is my everyday tobacco and what I choose when I need a simple, uncomplicated and satisfying smoke. I think a beginner would do well to choose this blend and even a Virginia devotee might like an occasional bowl of this.

Call me a candy-ass if you like, but I really enjoy this blend. While a bit on the sticky side, the base tobaccos are quality virginias all the way. Better yet, I can actually taste the tobacco along with the fruit and vanilla essences. Amazingly, this aromatic actually tastes pretty much like it smells and still has that soft sweetness which is McClelland's trademark. It really does taste kind of like berries and vanilla with a sweet virginia background. Composed of equal parts ribbon-cut virginia and black cavendish, it tastes the same throughout the bowl. Like many aromatics, it gets kind of bland at the very bottom. I normally mix this blend with 15% latakia to add fullness and slow the burn without sacrificing the wonderful aroma. I like to smoke this in a full-bent pipe and often exhale it through my nose to fully experience the aroma. There is negligable nicotine in here, so like McCarris, this is a good morning smoke with coffee or tea and a good choice for new pipe smokers. Available from Sherlock's Haven, San Francisco, CA.

Hmmmm...it's ok. I think the jury is still out on this one. It is not just moist, but it is GUMMY. I am going to have o leave the baggie open for a few days to get the moisture level right. The tobacco is certainly NOT the main attraction here, but the big candy-like berry flavors that ride the thick cloying smoke this produces. I would keep this away from pipes that aren't used for heavy aromatics. That being said, the name is dead on. I can remember when I was a kid, Lifesavers made a hard candy that was available in raspberry and cream flavor, and this stuff nails it dead on. I have not found this mixture to smoke too hot, but it can certainly leave your bowl wet when done. Becareful as the flavor entices me to puff faster than good sense should allow me to, almost getting a bit of the bite.

With the name of raspberries and cream, I was really looking forward to this tobacco; I even ordered an extra large supply. Well, was I disappointed. I taste nothing, except a very mild tobacco flavor. And I beleive if you took a blow torch to this stuff, it would still be difficult to dry it out to a point where you can keep it going in your bowl. I have had the same supply for over six months and it is still wet to the touch. If it were drier, I would give it a somewhat recommended, but it's just too wet for me.

As a very infrequent aromatic smoker my rating probably should be ignored by you regulars out there. I was eager to try this after hearing good things about this blend. I was quite let down by the experience. Too little tobacco flavor more my tastebuds and not enough aroma to make up for it. I will revisit this one later to be fair as I tried many of this type in one day which may have been unfair. Watch for an update.