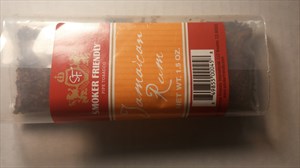 The rich Jamaican rum is the star flavor of this blend with ample support from creamy smooth vanilla. The Virginia is a base tobacco only, because you seldom notice it, except for a hint of grassiness here and there. Every so often, I get a few nutty burley notes. Has little nicotine, and won't bite or get harsh. Needs some dry time, but don't dry it out completely, or you'll risk losing some flavor. Burns at a moderate pace if dried a little. If not dried at all, you risk some moisture in the bottom of the bowl. The flavor is consistent to the finish. needs a few relights. Has a pleasant after taste, and can be an all day smoke. Three and half stars.

This was one of the first tobaccos I purchased, because it was cheap and sounded like it'd taste pretty good. Upon opening it, there was a slight stickiness and the tobacco was a little wet. I left it in my pipe while I ran some errands then after it had dried out a little I lit up. The charring burn tasted extremely sweet. After a couple puffs, the sweetness from the rum flavor mixed with a generic tobacco spice, which was quite enjoyable.

The entire first half remains mostly sweet with a little spice. As the tobacco burns, the sweetness dies down and the spice kicks up, then towards the end it's all spice and no sweet. The body of the smoke is quite thin, which can be disappointing for those looking for a more full-bodied smoke, but my tobacco may have also been a little too wet. I will have to smoke this again on a later date and report back. As for the room note, the aroma smells almost the same as the tobacco does in the bag: sweet, almost like condensed milk, with a little hint of a light tobacco smell. The sweetness of the room note is definitely pleasurable. I've even gotten the approval from my roommate who doesn't smoke tobacco.

Somewhat strong flavoring, but not overwhelming. The tobacco itself is mild, but there is a spicy flavor and it can start to leave a burning sensation, kind of like cinnamon. Not bad, but not the best either. I suggest the classic black by smoker friendly instead.