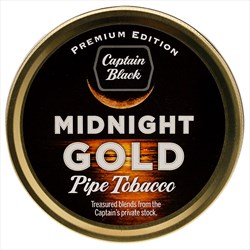 Captain Black Midnight Gold is a smooth, and lightly-sweet blend of superb burleys, rich, but mellow, black cavendish, and a bit of bright Virginia. It has a wonderful confectionery aroma, and can be enjoyed all day without worrying about bite.

Vanilla is the star flavor, much of it coming from the black cavendish. As well as the vanilla, I get a little caramel, anise, toffee, and a touch of syrup from the topping. I'm fairly sure I detect a little rum, though the alcohol/chemical base is a little detracting. The Virginia is mostly drowned out, but gives a light grassiness. The burley is also sublimated, but I get a minor hint of it here and there. I also get a little honey from either the Virginia or the gold cavendish. It may need a little dry time, but it's fairly smooth, a bit creamy, and doesn't bite, and leaves just a but of moisture in the bowl if you're not a dry smoker. Needs an average number of relights.There's a long lasting after taste that lasts a little too long. Not entirely sure it really deserves three stars, but I think it's a little more than a two star blend. I settled on two stars, though I'd prefer to add half a star.

When you open the tin there is a sweet vanilla aroma and there is a nice variety of colors. I bought this tin about 9 months ago and the moisture was just about perfect when I finally got around to popping the lid. It packs well, but the various cuts seem to lend itself to being a little more thoughtful during the packing process. It takes a light very well, but I find it stays lit more consistently if you have a charring light first and then light the vowl a second time. The smoke is plentiful and white. The aroma is sweet with the main player being vanilla. However, the taste is tobacco. The tobacco taste is very mild and there is no bite at all. Again, the word here is mild. Puffing fast or slow does not change this and the taste stays the same all the way to the bottom of the bowl. To me, the Virginia plays more of a roll than you might think. The Burley tobacco seems to be in the background. I have smoked a ton of Black Cavendish in my day, but I had a tough time noticing a big Cavendish hit with this one. Maybe this speaks to the tobacco's balance in that none of the elements drowns out any of the others. The ash is fine, but a little dark for my taste. Some of the sugars may burn a little hot and darken the ash at the end. It does, however, jump out with a tap on the knocker. My wife loves the aroma of this stuff and I can enjoy a mild tobacco flavor at the same time. She likes it better than Captain Black Royal and better than 1Q. The aroma also tends to leave very quickly so this one might just be the one to please most people most of the time. By the way, I find Captain Black Royal, CB White, and 1Q to be stronger than this premium cousin. And, this stuff works better in a Brier than a cob. The same cannot be said for the other cousins in this genre. For those looking for a mild well-balanced blend that will please a crowd, this is worth the very affordable price.

This is my first review so please bare with me. The tin note smelled strongly of vannila, with mild caramel, and liquorice. Ships wet, some may wish to dry it out first; I smoked it fresh from the tin with little difficulty. I prefer ribbon cut, but I didn't struggle overmuch to load this one up; it just takes careful attention. The room note is very pleasant, and again the vannila from the tin is the predominant portion. The taste is rather mild, the natural taste of the tobacco manages to peek through from time to time and the vannila isn't as overpowering as I had feared when I opened the tin. Apparently this blend has Latakia in it, but I wouldn't have known it if I hadn't read up on it, so Latakia lovers may wish to hunt for a different tin.

I like what they are doing with the new Capt. Black premium line and Midnight Gold is no exception. This blend is one of the better black and golds you can get at the moment in my opinion, lovely rough cut black cavendish and a smattering of broken brights throughout. A tad wet in the tin but it smoked dry and cool, flavour was that of vanilla and toffee but not overdone. Very similar in many respects to CB white (or original) but lacking that Capt. Black fermented tin note and the cut is a bit more uniform. If I had to choose between CB White and a tin of this, I'd opt for the Midnight Gold(and I really like CB White). Smooth, bite free and nice room note. Nothing mind blowing here, but certainly a positive step in the right direction for the Captain Black brand. Any aromatic fan or CB smoker should try this. I only wish they sold this new line in 12oz cans.

A great new addition to the Capt. Black lineup. Excellent aroma from the tin and it smokes like it smells. Deep flavor from the Cavendish and vanilla. Rich and creamy smoke that has no bite. I have a feeling this will be a constant in my rotation.

This is very close to captain black white I love it This is a premium version of the above stated Great taste, vanilla or some say rum great room note also.

An attempt at making a better version of CB Regular. The tobacco is sticky and it smokes wet and goopy without any tobacco taste. I almost ruined my new BriarWorks pipe with it. Stay away from it.

I first thought this blend was nothing more than Captain Black white with a few brights thrown in it. The tin note was certainly similar. After closer inspection, however, I found that this smelled a little less of cocoa and more vanilla than CBW. It has rum and caramel notes to it as well. It is a wet tobacco, so letting it dry for a day or so is essential to getting a goopless smoke.

It packs about like regular Captain Black. The cut is a little better though. It took a light and held it fine. I suppose what surprised me was that you can actually taste the tobacco instead of the topping. I got a good flavor from the Cavendish, and the casing mixed well with it (sort of a spiced vanilla rum flavor). It was pretty good, and differed enough from CBW to satisfy me.

I'd recommend this to any aromatic lover. It's a good blend. I wouldn't say that it is one of those that I will absolutely have to replace in my collection, but I'd smoke it if I were out of CBW.

I can't figure out why no added flavourings are listed? Just the tin-note attests that this has more than just a little. The blend combines a variety of shapes and sizes of leaf, right from some tiny ribbons to some coarse pieces.

The initial flavour to come through is a sweet, vanilla one. The sweetness, possibly caramel, gradually abates and gives way to a liquorice flavour. The stronger of the leaves is easily the Cavendish, but this doesn't mean the others are redundant. At first they might as well be, but after a quarter bowl I get some toastiness from the Burley, with some light Virginia tones. The burn from C.B.M.G. is well behaved, fairly cool, and it's bite-free. My main problem with this is after a while it develops a nasty bitterness, which lingers in my mouth.

If it weren't for the aftertaste I'd rate this higher, but all things considered it gets two stars: