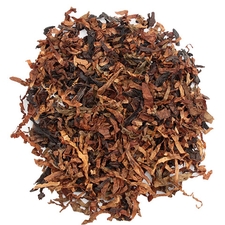 The Java cigar leaf really makes this blend. It has a nice sweetness and a Perique-like spiciness to it. It also adds a great deal of body to the blend. You can taste cigar like notes on occasion. The Virginias add their own sweetness, but not much flavor. The Syrian Latakia seems to have been only lightly smoked allowing some of the character of the Oriental leaf to come through. It gives a mild smokiness and sometimes you can taste the sour, buttery notes of the leaf. This is an outstanding smoke. Medium to full in body and flavor. Very highly recommended.

This is a superb blend that I like a lot because it's just sweet enough but not too sweet, and unlike some other englishes I've experienced the latakia component doesn't knock me over.  Sure the latakia is there but as Mr. Gentleman Zombie commented something to the effect of, it wasn't heavily smoked such that the basic oriental nature of the leaf comes through also. Pretty clever.

So I'm sitting here right now on my front porch with a light rain falling, smoking a bowl of this blend over a glass of pinot grigio and I'm thinking it's all quite nice.  This has recently become not only my favorite english blend but also my favorite cigar leaf blend as well.

The Latakia is definitely there but it's not a Lat Bomb. The description of the tobacco doesn't include any Oriental or Turkish leaf but, if I didn't know that, I would swear that it is there. There is a distinctly sour note, but not unpleasantly so, that is usually associated with Orientals/Turkish. Perhaps that comes from the type of cigar leaf used... The Virginias are sweet, with a bit of fresh bread flavor.

It's a coarse ribbon, a mixture of browns (some medium, some dark), and mine was too dry. However, that's entirely my fault as this is one of the few blends I cellared without checking the seal first!

So, it's quite a tasty blend. I find it slightly milder tasting with Latakia than is often the case with an English. The Latakia adds rich flavour, albeit not a strong smoky quality. The Virginias do nothing spectacular, but sweeten the smoke slightly. At first the Java acts as more of a topping, rather than a structural leaf; a cigar 'twang', but not any bitterness from it. After halfway the Java develops more strength of flavour, becoming more certain a taste. I can't pass comment on the standard of burn as I allowed it to become dry!

The room-note isn't my thing, and it has a healthy amount of nicotine.

I'll rate this as if I hadn't let it become bone dry: recommended.

Delicious blend with wonderful latakia flavor. Long lasting finish - I smoked a bowl last night before dinner and could still taste it after dinner and a glass of wine! My only dislike is that it is fairly dry out of the pouch and even filling a little tighter, it does seem to have some burn issues but it does smoke cool, which is nice.

Excellent tobacco, very spicy, satisfactory with pure tobacco taste tha reminds you a good cigar. The latakia is not dominant, only gives to the blend and extra push...recommended for experienced pipe smokers and smoked in a small bawl preferably.

This review is for the newly re-released version which no longer uses any Syrian. The idea of a full-bodied English using a dash of cigar leaf sounded interesting to me. While there are no glaring faults here I just wasn't convinced by the execution. The cigar leaf does add some good earthiness to the primary flavor, but it also leaves a rather unpleasant aftertaste. Somehow other producers using cigar leaf have managed to avoid that.

This is another case of a German-made blend that I believe was trial-tested in a 9 mm. In a side-by-side comparison using an unfiltered meer and a 9 mm briar I found the meer revealed some herbal bitterness while the filter removed any off notes and increased mid-palate body. Aside from the herbal note, they both tasted like some sort of dark fruit was used in the casing (plum?) and there are some pleasant toasted pecan-like undertones, rye bread, and a hint of molasses.

Somewhat muted and lacking vibrancy in either meer or briar, this one seems mostly bass and mid-range, and not much sheen from any spicy overtones (probably because no Turkish is used). Just for comparison, Newminster's 306 has the exact opposite problem, being mostly upper tones and lacking bass foundation. I actually tried combining the two but they seemed to fight against each other. But why settle for either when there are plenty of of other blends that offer a balanced presentation on the palate?

I also did another session comparing this directly against some other English/Balkan blends including one other with cigar leaf (John Patton Latakia Junction). All of them made a better impression than this, the winner being Arango Balkan Supreme which simply left this one in the dust.

I'll keep my supply in a mason jar and re-visit in the future, updating this review if there are any noteworthy developments. For now: two stars without filter, two and a half stars with filter.

This is definite staple in my cellar! A great choice for the first pipe of the day with your morning Joe, and also a great all day blend that won't weigh heavy on you.

3 distinct tobaccos in the pouch, the bright Va, the medium brown Java and the dark Latakia. The Latakia comes into this blend in hard chunks, at first I thought it was all stem pieces. They can easily rub out into finer pieces to ease packing. Moisture content on point here. Aroma is a fig like sweetness, with just enough light smokiness to know there is Latakia mixed in. The Java leaf really stands out in the aroma, lending only what I can describe as a slight chocolate aroma. From the initial pipe I packed with this blend, I knew I would be hooked.

Packing is plain and simple. The moisture content and uniform cut makes it a breeze. Initial light comes easy, just a light, tamp, light. Burns cool and even, not many relights needed.

The flavors are delicious. The Java leaf has a perfectly balanced sweetness to the Latakia, adding that sweet cocoa note to the mix. The Va adds a bit of spiciness and tang, which gets a bit more intense into the bowl. Yes, Java is used as a fine cigar wrapper, but this doesn't have the room note or flavor of a cigar, so do not let that dissuade you from trying this blend. In fact, I think it has a pleasant room note, and so did the wife. Nicotine is middle of the road. Its not light, but It doesn't set you on your butt neither.

This gets a full 4 star rating from me. Superb blend that will always be in my rotation as long as they keep blending it.

Notice: On smokingpipes.com, I noticed that this blend is discontinued by June 2020.

As previously mentioned, the java leaf content of this blend increases my curiosity each and every period that I tried. When I smoked it two years ago, it was fresh, smelling just latakia, but nothing else, cigar leaves were observable yet maybe not mature enough to take the lead during the experience of smoking. What I would say is that just like other latakia blends, it was a bit spicy, a bit sounded like BBQ sauce and oily&peppery through the end. Nothing special is worth mentioning. After a year of maturation in a mason jar (last year), to be honest, I intentionally tried it to see whether the taste is changed a little bit, but don't actually remember any significant idea. It slept for one more year. Now, in 2020, I am tasting my old friend again. It's just completely different. The traditional smell of latakia is almost faded away, and the strength of Java leaf came into the force! Hail Java! A hint of latakia does exist, but overall, it's now more like the blend of burley-latakia or Kentucky-latakia. Simply amazing.

My #1 English blend that I tasted so far. Sadly, it's discontinued.

I always have to smoke multiple bowls before I can come to a conclusion on a new tobacco. It sometimes takes my palate a bit to adjust, and the first bowl on a delightful new tobacco can be horrendus. Planta's Full English is no exception. Given the price, I just went ahead and pulled the trigger and purchased a pound. I figured even if it wasn't that great, the price would make up for it, and we're in lockdown and none of my local tobacconists are open. I'm just now finishing up a third bowl, and I have to say, I'm not at all disappointed. The first bowl had a bad bitter taste for the first half, but again, my palate takes time to adjust. The latter half was pleasant. The second bowl was markedly better, but not superb. The third bowl is very good. There is also a decent amount of vitamin N, which I like. If I could, just based on this third bowl alone, I'd give this 3 1/2 stars, but it's 3 or 4, not half way in between. Given the current price of just under $24/lb, I'll bump it up to 4 instead of down to 3.

EDIT: I knocked it down to three stars after smoking a few bowls in my briars. I couldn't get the first half of the bowls to be great, but the second half was superb. I may revisit this after some of it has aged for a month or three.

I will say that the aroma of the tobacco when I first opened the pouch was like nothing I have ever smelled before. I put 3/4 of it in a jar for aging and 1/4 in another jar for smoking. Maybe after some months, this will become a solid 4 star in its own right. All in all, this is fairly unique in my experience.

2nd UPDATE: I packed it all into jars and I just opened one just under two months. It really seems to have smoothed this blend out. With no age, I would say this is recommended. Just two months and I would rate it as highly recommended.

Age When Smoked: Not Aged