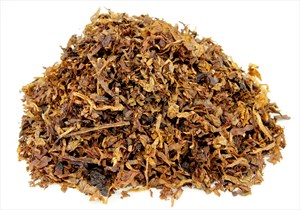 Aroma, one of the most important aspects of any smoking tobacco, is the paramount consideration in this blend Dark and light Cavendish tobaccos.

The black cavendish is weakly vanilla-like while the gold cavendish has a touch of honey and grass. The vanilla gets weaker toward the finish, and isn't strong to begin with. Has very little nicotine. Won't bite, but can get slightly warm. Burns at a reasonable pace with a little inconsistency in flavor, and leaves a little moisture in the bowl, but it's not goopy. Needs some relights, and is an all day smoke.

My blend appears to be made almost entirely of brown Cavendish, it only includes a very small amount of black flecks. The aroma from the pouch is delicately aromatic, but it's hard to pigeon hole what exactly the additives are. Chocolate and nuts maybe? The ribbons are just below medium in size, and the hydration's very good.

The smoke's quite nice from HS-3, but I find the same problem with identifying the aromatics as I did in the aroma. Again, it tastes of something sweet, and maybe a few nuts. The tobaccos give me a cleaner Cavendish taste, as opposed to the heavy, sticky, vanilla type one I'd expect to get from a regular Cavendish blend. A bowl of HS-3 burns well, but it can give me a small bite, if I puff with force.

The room-note's pleasant, and the nic's mild.

Comment = Fruity, a little Hot at the end, has an Fruity After Taste

Bought this to try and also to mix with some other tobacco that I had. In the bag, I can't detect much aroma at all, and once lit, it's really mild. Room note is OK, but nothing to get to excited about. I have mixed it with Lane TK-6 and together I get sort of a chocolate-cherry aroma in the pouch. Once lit, room note is very slight, but certainly would not offend anyone. Just really not enough flavor. Not topping, not tobacco, not......, but that's just my taste. Can't get any bite, so this might be a good place to start for a new pipe smoker.

This is the least aromatic of Lane's aromatic cavendish tobaccos that I have tried. It leans towards more of a mild lightly cased burley tobacco, a bit sweeter though; Sort of halfway between Prince Albert and Sir Walter Raleigh Aromatic. It has a slight roasted nut bouquet with a faint note of vanilla in the background just rounding it out. There is a mild straight forward brown sugar sweetness along with a earthy air cured note. I found this rather pleasing for what it is. There didn't seem to be any black cavendish despite the description. It's not an overly moist tobacco and in fact Lane seems to be throttling back on the humectant these days. Anyone looking for a more rounded and slightly sweeter tobacco over blends like Prince Albert and other simple ribbon cut burley blends should give this a try.

I bought this because the description was well written, by itself it isn't extraordinary however you can mix it with other tobacco and it can improve some blends that end a little harsh. I have mixed this 50/50 with lane BCA and it is very satisfying from start to finish.

I received an ounce of this as part of a blind test (which I failed) a month or so ago and finally got around to finishing it. Mostly a lightly creamed coffee color with some streaks of black in it. Excellent pouch aroma, if you like the aroma of non-tobacco ingredients in tobacco... which i do.

Not much to say about this one. The description above is very accurate, as this one has very faint flavor and tons of room note. I get hazelnut from this one, but I won't swear to that, as I'm terrible at placing non-tobacco tastes in a blend. But the flavor is very subdued. As a result, this one screams to be a mixer, so I picked up another few oz from a local tobacconist (who was loathe to tell me his house blend was really this!). Using my favorite blending tobacco that's not named perique, C&D's Kelly's Coin, yielded... Kelly's Coin that can be smoked around others. Which was the point. The KC completed obliterated any flavor this HS-3 had, even when only 10% KC was added. I experimented further with this but the results were either not so good or pointless... which is how I'd lean towards describing this blend. 1.75 stars. Try it if you like very, very mild taste with an incredibly luscious but not overpowering room note.

HS-3... Sold as a bulk blend, that is made up of long thin strands of tobacco, mostly brown in color, with only traces of the black Cavendish said to be in this blend. Its aroma is typical of other Lane tobaccos.

As for the taste of HS-3, there is plenty, but is unlike any other Lane tobacco I've tried, it has some sharpness to it, that I kind of enjoy, but this sharpness will ghost a pipe in short order. So I would suggest you use a dedicated pipe for this blend, because IMO HS-3's unique flavor does not mix well with many other tobaccos.

Personally I found zero tongue bite, and considering its fine cut, HS-3 gave me a surprisingly long and cool smoke. Judging by the few reviews HS-3 has on this site, many ARO smokers out there have for some reason passed on this one. This stuff is not my favorite, but I smoke ARO's only as a change of pace, but for those that prefer ARO's, IMO this tobacco is worth a try.

I smelled a slight vinegar tone when I opened the pouch, once lit it made the room smell of vanilla. The flavor I got was of a plain nutty Burley. I will come back to this from time to time.

This is a nice tobacco. Beautiful brown strands almost like flakes.

Three Stars * for sure.

Addendum: Unfortenately I bought some more from an online vendor and It's not nearly as good as the local bulk. So the consistency is not there.

Added: I doused this with some cheap rum in a tray and let it dry in the sun. This worked well. It burns better and is tastier and smoother. Be carefual about drying tobaccos in the sun as they can get overdried very quickly. Check often.

The aroma is nice, the tobacco burns well, but that is about it. I think that they forgot to put the taste in this one. It does have some vanilla components, but it is very flat. There is also curiously not a lot of tobacco taste either. The only use I can think of for this blend is to "water" down stronger aromatics with it.

Plain ol' sweetend golden sliced Cavendish. On it's own, it's a flat, boring, one dimesional aromatic. However, as a blending component it shines. Throw together of 50/50 mix of HS-3 and McClelland VBC and your have one tasty butterscotch flavored aromatic. It also mixes well in other more complex aromatic recipes.

This isn't to my nose a strongly vanilla cased tobacco. It could be in there, along with licorice and perhaps other aromas. But I really doubt it's got vanilla in it at all. (Read on for why I think not.) The pouch scent is a rather mild, generically fruity scent that reminds me of chewing tobacco, but isn't strong.

It really doesn't taste like a typical sweet aromatic to me. It's definitely an aromatic, but the aromas are different. It's a mild, cool smoke. Burns rather quickly and dry. The room note is mild and pleasant. The bowl fragrance is interesting. Kind of an herbal, grassy scent with a bit of vanilla-like scent that's not quite vanilla. I think it fits the "new-mown hay" description generally given to tonka bean, a common pipe tobacco "sauce." In foods, tonka bean's been used as a substitute for both vanilla and bitter almond, so it's not easy to pigeonhole. The taste has a slight bitterness to it, with a little tingle to the tongue; definitely a change from the sweet aromatics, but it's not one of the heavy hitters by a long shot. Just a nice difference.

It's a nice changeup for folks who like aromatics but sometimes want a little break from the routine. It's got a stronger taste and aroma, and to me a stronger nicotine kick than Lane's typical sweet Cavendish blends. I've decided I like it well enough that I bought a half pound for a change of pace. I've gone back and edited my earlier impressions of this stuff after smoking it a while. I do like this stuff. One thing I've found is that if I smoke a single bowl of this in a pipe seasoned with my old favorite BCA and then refill it with BCA, that bitter note I mentioned that's slightly noticeable while smoking HS-3 is quite noticeable. Takes smoking several bowls of BCA to clear it all out. I'm presently devoting a couple of pipes to HS-3. This isn't Lane's usual vanilla aromatic.

I've recently tried mixing HS-3 and BCA. I'd imagined that if the bowl residue is so noticeable in a fresh bowl of BCA, in a blend any amount of HS-3 would completely overwhelm it. What I find is that it indeed tastes like HS-3, but mellower, and it burns really well. Makes great clouds of thick white smoke with a pleasant aroma, not so strongly aromatic as BCA. So much for keeping the two separate in separate pipes! :-)

this tobacco was a bit of a disappointment to me. I was really hoping for more of a sweet smoke which this isn't. It has a little musky taste and aroma which I can find elsewhere. It is smooth smoking but not one I would want to make my wife endure very often.

Aroma is the important consideration in this blend of Cavendish tobaccos. This is a good Anytime blend and suggested smoking method is medium to large bowl pipes. Because of the thin string cut this tobacco tends to burn more quickly than others and in a small bowl pipe it could burn hot and that is never a good smoke. Puff slowly and enjoy!

Compared to other vanilla aromatics I have smoked (Danish Black Vanilla - yuck!), this is honestly not too bad. My local tobacconist sells it under the name of Brookwood. It starts off very mild, almost flat, then builds in fullness and body throughout the bowl. You can't really taste the vanilla flavour except towards the last quarter of a bowl. That's a bit disappointing since, if I'm going to smoke an aromatic, I'd at least like one that tastes like it's supposed to.

The room note on this is pretty nice. Its a nice change of pace, but I won't make it a regular smoke.