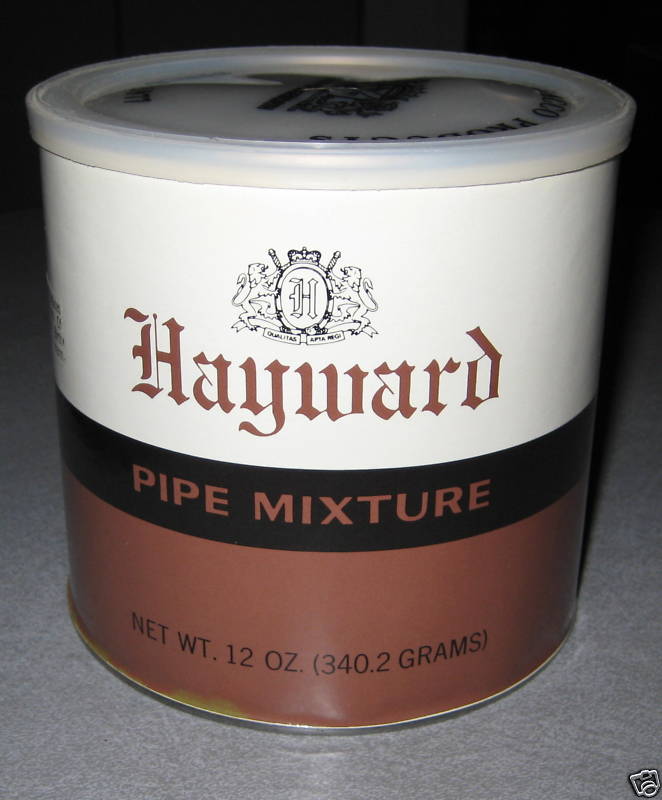 A Burley blended pipe tobacco with latakia and Virginia.

This product is no longer manufactured. It is the blend Bing Crosby smoked. Check out his "autobiography" Call Me Lucky, and you'll see a can of Hayward Mixture on his dressing room table in the photo section. There also exists a couple receipts in the Crosby archives for his purchases of this blend. He may or may not have smoked Crooner at some point, but there's no doubt about his smoking Hayward.

The burley is nutty sweet with a hint of cocoa, and stands out a little above the other components. The Virginia is grassy, citrusy sweet, and is the second star ingredient. In an important back up role is a fair percentage of Cyprian latakia, which is smoky and mildly woody sweet, and has what I can only describe as a "leather" note or two. Has a slightly more than mild nic-hit. Well blended, you will notice every nuance in every puff from start to finish. Burns well, requiring few relights, and is cool and smooth with no bite and virtually no moisture in the bowl as it burns to ash. The burley seems to stand out more in the after taste than the other tobaccos, but not by much. A very pleasant all day American English mixture that wears well and easy on your tongue, it probably deserves three stars, but I give it two and a half because it lacks the depth and a little of the complexity of others in this genre like Walnut. I rounded it up to three stars because its virtues deserve more than a two star rating.

The formula was later changed to exclude the latakia, but I have not tried that version, so this review obviously pertains to the older manufacture.

One of the nice things about being on vacation this week is that I get to smoke more! Another was spending some time with a local elderly gentleman and getting some insight into what pipe tobacco was like back in the day. I was able to score a couple of oz of this time honored blend that he had stored in a glass jar since sometime around 1990 (he couldn't remember exactly). Said he smoked it all the time but then it changed, possibly when the latakia was dropped, as he said it used to have a smoky flavor.

Anyway, this iteration of Hayward was an ugly, choppy, wood chip-type affair with a rather sour and musty odor. It was very dry but not crispy - still smokable! The flavor was burley of the old fashioned variety. Plenty of nicotine and a nice, but rather non-descript tobacco flavor. Nothing to write home about, but ok. There are better burleys available today. It did go bitter kind of quickly but the first 3/4 or so was decent, kind of nutty and cigarette-ish but pleasant enough. Even though Lane's is bringing back one or two of their old-time blends, I see no reason to resurrect this one. I never tried it when I used to sell it, and I use the term "sell" loosely because in 10 years of pipeshop employ, I don't think I sold more than 1 can. But I was appreciative of being able to walk down memory lane, especially as I was learning about the "good old days"!

*Note: As mentioned by "Bat", Hayward Mixture was indeed a blend with more than a hint of Latakia, a rather full-bodied pipe tobacco, manufactured by or for the Moss & Lowenhaupt company on Olive St. in downtown Saint Louis. The firm went back to before the American Civil War and was a classic "cigar store" but catering as much or more to pipe smokers as to cigar smokers. It was a classic, old-fashioned shop with dark wood counters, a constant open flame for lighting up within the shop and fellows in ties or bow-ties & often vests as well serving behind the counters. The shop also sold Battleforce smoking tobacco, as well as Charring Cross pipe mixture. One could buy Hayward Mixture in a pouch wrapped in cellophane or a in rather well-made tin with a handy attached lever, which held a much larger quantity of tobacco. The tins were seldom tossed out, as they were colorful and very sturdy, acquiring many other uses after the tobacco had been smoked. The tobacco products, including Hayward Mixture were marketed elsewhere & I often found that particular blend for sale well beyond St. Louis.

Alas, in spite of its long history, the store went out of business in the early or mid-1960s, a victim of the deteriorating downtown area & changing trends with regard to smoking. Thus, anyone encountering Hayward Mixture tobacco a decade or so later, would hardly have a legitimate complaint because the tobacco would no longer bear testimony to the original smoking mixture. It was quite definitely a well-crafted blend with a strong flavor of Latakia and definitely not to be confused with "Old Fencepost" or some of the other bottom-end tobacco products, often aimed at the roll-your-own crowd.

I believe that Hayward Mixture is an old an honoured blend. Apparently a proud past is no guarantee against a shameful present.

Opening the tin (yes, I bought the large container, will I never learn?), a sour, unpleasant smell filled the room. There was an unremarkable sight of various chopped leaves, all the shades of brown possible. Sadly, it smoked as it smelled: sour, with a touch of Latakia. I have tried "Hayward" twice this year; same results both times, no matter the pipe. It may say something that the opened tin stayed "fresh" after eight months. And what it says is not too nice.

I really wanted to like this...I found it impossible; I do hope that another reviewer will examine this blend, there must be some merit to it.

The Hayward I recollect, from years ago, was a decent English type Virginia/Burley blend with a bit of Latakia. I think it was produced by a St. Louis based company.

I bought a pouch at a pipe & cigar store in Portland, Oregon. No telling how long it had languished there unnoticed. The packaging is uninspired to say the least. No hint of who made this blend. The 1.5 oz. box was sealed in cellophane and the sealed, plaid colored pouch was inside. It was as dry as a Mummy's tomb. This stuff reminds me a little of some House of Windsor products. About the same ingredients as Union Leader which is Virginia and Burley. I saw no evidence of any Latakia, nor tasted the dark weed. Fired right up (so dry) and burned at a medium rate all the way down. No gurgle or goop. Tastes like a medium quality Burley with a 10 to 20% Virginia component. All- in-all a rather unremarkable smoking experience. I am attempting to rehydrate this and will try it later. The one note that elevates this above average for a drugstore tobac....it smells really good. There may be a topping. We will see after it moistens up some. By the way, I don't recommend smoking this all the way. Dump the dottle as it does get into the "bitter-Burley" curse.

My memory of this tobacco blend was resurrected by a listing on ebay of one boxed pouch of Hayward Mixture combined with one boxed pouch of John Rolffe Mixture. I smoked both in the old days before I became an ardent english smoker - the early and mid 1960's. I remember Hayward Mixture as being a virginia/burley mixture with at least some latakia content - and I liked it. I agree with another reviewer that it was somewhat like smoking Union Leader or Prince Albert with some latakia added, even though I didn't understand what latakia was at that time. The next time I contacted this blend was in 1994 when my wife and I were on vacation in Hawaii. I wandered into a smoke shop in Lahina in a shopping center and there it was on the shelf - five or six boxed pouches. I bought one but didn't open it until we got back to Columbus, Ohio. I opened it at Barclay's Pipe and Tobacco as a kind of oddity and we smoked it. And we agreed it was rather nondescript - no latakia detectable. Something had changed. The store owner then ordered a one pound tin for his stock and, after a while, it sold. Go figure.

I guess this is a review of the 1994 product by default. Not good and not bad; just stuck somewhere in the middle of the drug store brand field. Too bad, because the 1960's product was an interesting smoke - kind of akin to Barking Dog. I would have reviewed that blend more positively.