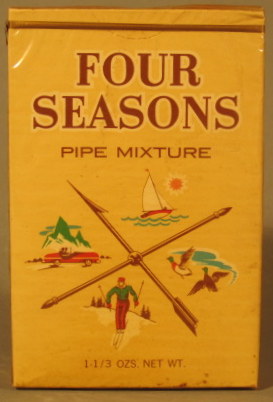 Burley and Flue-cured Golden leaf with a touch of Black Cavendish to make this blend bright and cheerful.

A Morley is right on, and then some. I renewed my interest in this OTC pipe tobacco when I was getting ready for deer hunting and was looking for an inexpensive tobacco to take into the woods in my cob. I found two packs of this in a local news-magazine-cigar store, covered with dust on the back shelf for $1.47 per. Seemed right. On opening it, the tobacco was a little dry with flakes of brown and black -- I've never been good at identifying the tobacco. Obviously some burley but some cavendish too. I smoked this in the woods at lunchtime and on the way home and found myself reaching for it more often. It produces exactly what it advertises -- a mild smoke with a cherry birch flavor. This is not a heavily cased cavendish at all. The cherry birch flavor is allegedly from adding some part of the cherry birch bush, and I looked it up, and it does exist. In smoking it, you have to remind yourself that it's cherry birch or you might think you've been slipped something soapy and flowery. I never tried in a briar, but it is a simple and uncomplicated, on the sweet side smoke in a nostalgic package (although I could swear there used to be a hunter on the front in the collection of outdoor sporting images). It burned to the bottom leaving a grey ash; no wet dottle; a pleasant room aroma. This is a nice change of pace and an aromatic without the heavy, clumping cased cavendish. It will be one of my alternates on a regular basis, when I can find it.

The simple fact is that, nowadays, when a non-smoker and even a good many smokers are asked to imagine pipe tobacco in either appearance or smell, a chunky, sweet-smelling, mostly black Cavendish sort of blend will come to mind. Perhaps this is not what tobacco was meant to be, but it remains true that Captain Black and his host of imitators have brought the fight in from the streets and into our smoking rooms and have come out on top. I still like matured Virginias and straight Burleys above all others, but even I am not so high-minded as to think that I will fail to enjoy a little something plebian in my pipe now and again.

Four Seasons is as much a common man's tobacco as can be found and a good one at that. For its ingredients all that is required is a simple footnote that reads 'see Captain Black'. It is so sweet and simple that it cannot be brought to burn the mouth, and the only way that it can be offensive to the palate is if one feels one is not being presented with enough sophistication. You certainly will receive no bad comments about the smell from others. What really makes this blend shine, once again shine in a straightforward, almost childlike way, is the mysterious addition of something called cherry birch. I have no earthly idea what it is. I signed up for a forestry class once and ran like the Dickens back to English Literature after only a week. The stuff adds interest, though, and even a little surprise. With the overall flavor of soft, comforting vanilla found in all such domestic aromatics, one will also be given a flavor like unto ginger or apple or honey cruller. Uncomplicated, yes, even uninspired, but it still can make one feel as good as eating a bowl of a favorite breakfast cereal from when you were a kid or watching an old Saturday morning cartoon. I give Four Seasons the highest marks not because it is the best imaginable, but because it is the best it can be for what it is.

Good gosh.... This is just plain not my cup of tea. It is sweetened beyond measure, does not stay lit well and must contain more sticky stems than I've ever seen in a tobacco. Worst of all, I paid $20 for a tin offered on Ebay. The seller said it was a 10 year old tin.... Well, older ain't better regarding Four Seasons, which, by the way, won't be on my play list at any time of the year.

Purchased the tub of this online for $20 on a whim. The flavor is cherry birch. Probably the most nasty tobacco ever made. I havent yet tried mixture 79 but this has to be a close second. The only blend i could not smoke more than two bowls of. The rest of my 12 ounces is now at the bottom of a landfill next to Jimmy Hoffa in my beloved state of New Jersey.

This is the "Match" version review. Pretty good, has a nice cherry birch scent and flavor. Ive never tried the original, so dont know how to compare. Nice blend, I have a full jar, and seems to be just about right for a full experience in the pipe.

Age When Smoked: One year

This review is for the Altadis four seasons match.

tobacco is at an ideal moisture content. this is not some overly sticky goopy drugstore aromatic. aroma is a faint tart cherry (cherry birch i suppose.) Looks like equal parts of medium to dark brown and golden fish flakes with smaller quantity of black cavendish and a few sticks stems and twigs. tastes like it smells a bit sweet and like a tarty cherry. would i buy this again? heck ya it is good and i have never had anything quite like it. not something i would have pounds upon pounds of but i plan on buying 4-8 ounces to have on hand when the mood for a simple, flavorful change of pace arises.